UCLA has seen the future, and only wonders what took so long

Share All sharing options for: UCLA has seen the future, and only wonders what took so long 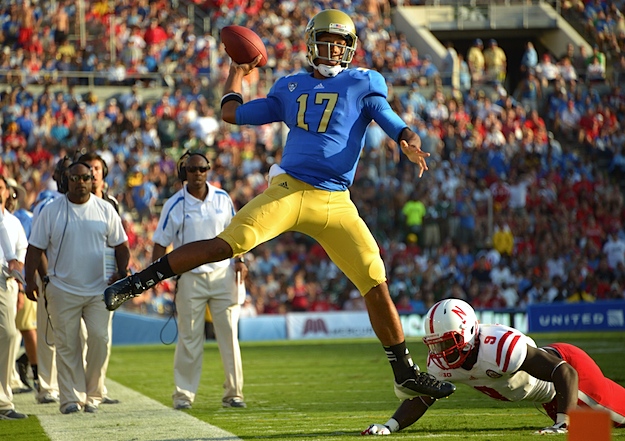 2. Again, like last week, the star of the show was redshirt freshman quarterback Brett Hundley, only more so: Whether or not they're feeling confident yet in their new prodigy, or just don't want to jinx him with the plague of injuries and assorted misfortune that's a plagued his predecessors, Hundley's 305-yard, 4-touchdown, zero-interception turn in his first home start, against a ranked, name-brand opponent, is the coming-out party Bruin fans have been waiting for since Cade McNown.

Recall that UCLA spent pretty much the entirety of Rick Neuheisel's tenure as head coach redefining inconsistent, untenable QB play at a major program. Neuheisel's first starter, Kevin Craft, set the school record for interceptions in 2008 and had already been relegated to lame duck status by the time coaches handed the reins to redshirt freshman Kevin Prince the following spring. But Prince, too, spent the subsequent three years in various states of injury and ineffectiveness, yielding on a regular basis to the equally injured and ineffective Richard Brehaut. When Hundley arrived on campus last year as the only above-the-fold headliner in a disappointing recruiting class, the question around the program wasn't "Why should UCLA bench its veteran starters for a freshman," but why not?

They still don't have an answer, and Neuheisel must be wondering about now if giving Hundley the green light last year may have saved his job. Not to overreact: Hundley's not going to be this good every time he steps on the field, as his counterpart on Saturday, Taylor Martinez, can well attest. Expectations will rise, defenses will adjust, shoulders and knees will tighten, ache and swell. Hundley is the proverbial work in progress. But it's safe to say that for the next three years, at least, UCLA's starting quarterback job is booked solid. 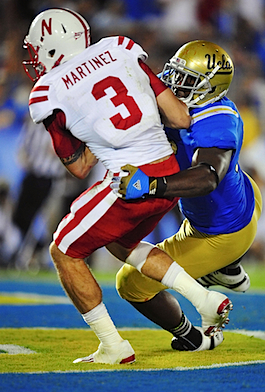 3. Given the general failure of the offense as a whole, Bruin running back Johnathan Foster may have been the quietest 1,000-yard rusher in the major conferences in 2010 and 2011, a distinction that may be about to change. Two weeks into 2012, Franklin is not only leading the nation in rushing, and not only the only back in the nation who has gone over 200 yards in consecutive games, but at the moment, he's doing it on well over 10 yards per carry. (Against Nebraska, he averaged just north of eight yards, and tacked on 59 yards receiving for a 276-yard night from scrimmage, the best single-game total in the FBS this season to date.) Until further notice, the Bruins have an actual offense.

4. Nebraska has an offense, too – three touchdown drives covering at least 75 yards in the first half – although it is not nearly the balanced, big-play passing attack on display in the opener, and it was reported missing shortly after halftime. The Cornhuskers fumbled the first snap of the second half, and it was downhill from there: Their final eight possessions yielded three 3-and-outs, a safety, an interception and just six points courtesy of a pair of field goals. (A third field goal attempt sailed wide.) But Martinez looked good on that 92-yard touchdown run in the first half, didn't he, folks?

Otherwise, he looked very much like the maddening, mercurial Martinez Nebraska fans have come to alternately love and dread. After dropping a career-high five touchdown passes on Southern Miss in the opener, he had zero against UCLA, and effectively ended the night by floating a vintage "Taylor no!" interception into the arms of safety Andrew Abbott, setting up the Bruins' game-clinching touchdown. Through two games, we've seen two completely different versions of Martinez as a veteran passer with four years of coaching and two full seasons as a starter under his belt, and only one of them corresponds with prior returns.

5. Anyone who's followed me for long knows I'm a rigid agnostic in the conference wars, but after opening day flops by Michigan and Penn State last week – not to mention Minnesota's overtime escape from mighty UNLV – the Big Ten followed up today with equally humbling losses at the hands of Oregon State (Wisconsin), Virginia (Penn State), Notre Dame (Purdue), Iowa State (Iowa) and now UCLA. (As I write, Illinois is also well on its way to losing at Arizona State.) The only Big Ten team that's actually managed to win a notable non-conference game is Michigan State, which somehow narrowly overcame a Boise State outfit that may rank as the greenest in college football, at home. But if the Spartans can't get past Notre Dame next weekend, the only standard bearer for the conference nationally will be a team that isn't even eligible to win it, Ohio State.