Kansas State leaves Miami (and the margins) bleeding in the dust

Share All sharing options for: Kansas State leaves Miami (and the margins) bleeding in the dust 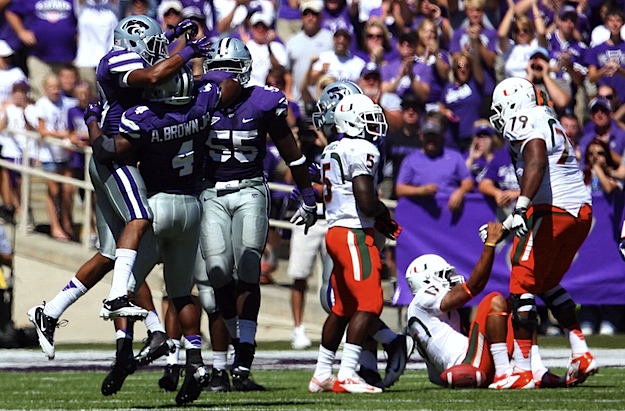 Kansas State 52, Miami 13
- - -
1. As always, Kansas State is essentially a makeshift assemblage of castoffs, misfits and obscurities from somewhere else. Fully half of today's starting lineup, 11 out of 22, began their college careers at a school other than Kansas State, including the entire defensive line and three-fourths of the secondary. Former Hurricane Arthur Brown had 10 tackles and a sack against his old team, for whom he could barely get on the field. Former Boston College quarterback Justin Tuggle, now a linebacker, chased Stephen Morris down for another sack. Juco transfer Adam Davis brought Morris down twice, and forced two fumbles. Two other juco guys, John Sua and Vai Lutui, both got to the quarterback from the interior line. The Wildcats' own quarterback, Collin Klein, interested scouts more as a basketball player, and began his K-State career as a wide receiver. When they first walked on campus, Miami would not have considered any of them worth the time of day.

2. Last year, appropriately enough, Kansas State was the little engine that could: Eight of its ten wins came by a touchdown or less, including an early upset over Miami secured by a late goal line stand in the final minute. The Wildcats were outgained on average by almost 60 yards per game, by more than 100 yards in conference games, and relied on an improbable diet of turnovers and timely kick returns to overcome their mediocrity on a down-to-down basis. Today was nothing like that: This was a start-to-finish ass-kicking that never looked or felt close.

K-State's offense scored on five of its first six possessions, converted 9 of 11 first downs, outgained Miami by 230 yards and didn't punt until the final minute of the game, with Klein and most of the starters long gone. Defensively, they forced three turnovers, sacked Morris five times and held the 'Canes out of the end zone until the final five minutes. The skeptics of last year's run in the polls – of which I was one – have no excuse to keep them out this week.

3. Of course, that can always change depending on future returns from Miami, which are looking as bleak as ever after a brief uptick in optimism in last week's win at Boston College. The 'Canes had one unambiguous positive coming into this game, freshman tailback Duke Johnson, who seemed to confirm his five-star billing with 135 yards on just seven carries at B.C., including two 50-plus-yard touchdown runs. Today? Johnson carried six times for 19 yards, with a long of nine. Either Kansas State's defense is that good, or he may not actually be the next Clinton Portis.

On the bright side, Johnson did show up late with a long kick return that set up Miami's one and only touchdown after things had been out of hand for, oh, about two-and-a-half hours. The Hurricanes leave Manhattan with no obvious positives on any front.

4. Collin Klein is considered a grueling, gritty, earth-bound quarterback, first, last and in between, and that's clearly still true – he had 22 carries today, with three short, bullish touchdown runs – but when things are working he can also be a spectacularly efficient passer. Today, he was 9-of-11 for 210 yards and a touchdown, with four those nine completions going for at least 25 yards. The scoring pass was a 27-yard strike to Curry Sexton that will convince at least one NFL general manager that all a big, strapping, Christian athlete like Klein needs is a little polish to make it at the next level. I kinda hope he's right.

5. That said, I still cannot stop laughing at this:

They did that on purpose! Oh man.