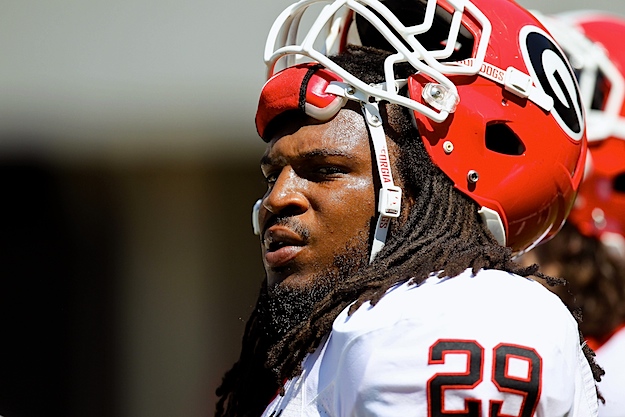 •JARVIS JONES, Linebacker, Georgia (vs. Missouri).
Georgia could be without a third of its starting defense in Columbia for the second week in a row, due to an untimely conflagration of suspensions (Sanders Commings, Alec Ogletree, Bacarri Rambo) and nagging injuries (Malcolm Mitchell's ankle). But the Bulldogs still have arguably the best player in the SEC on either side of the ball in Jones, who looked the part and then some in the opener with a team-high eight tackles, two sacks and a forced fumble for good measure. More of the same kind of pressure against Mizzou quarterback James Franklin, and the makeshift secondary may have more than a fighting chance. 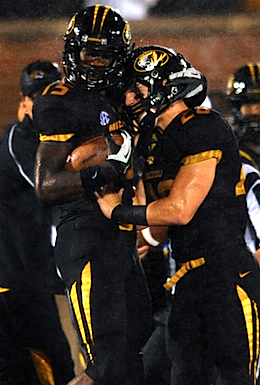 •DORIAL GREEN-BECKHAM, Wide Receiver, Missouri (vs. Georgia).
Then again, there is no accounting yet for the potential impact of Missouri's prize recruit, who gets his first chance to justify the hype for the benefit of a national audience after easing into the lineup with three receptions for 32 yards last week against Southeastern Louisiana. Almost all of those yards came on a single, 29-yard grab in the third quarter, which – if DGB is in fact the automatic mismatch his size (6'6", 230 pounds) and press clippings suggest – will only be the first of many. A few of which, for Missouri's sake, are preferably in the blueprint for tonight.

•LUKE JOECKEL and JAKE MATTHEWS, Offensive Tackles, Texas A&M (vs. Florida).
After a hurricane-imposed bye week, A&M is hitting the ground running in its first SEC game with a) A redshirt freshman quarterback (Johnny Manziel) making not only his first college start, but taking his first snap in a college game, and b) A running back (Christine Michael) facing his first live action since his second season-ending injury in as many years, against c) A blue-chip defensive line made up overwhelmingly of former five-star recruits hitting their prime as second and third-year starters. But between their promising-but-uncertain stars and the large, angry Gators seeking to deliver a painful initiation, the Aggies also have one of the league's most veteran lines, anchored by a pair of bookend tackles, Joeckel and Matthews, who combined for 46 starts in their first two years on campus and are widely projected as likely first-round picks after their third. If "SEC Football" is all about the dirty work along the scrimmage, A&M is either going to stack up pretty well, or it's going to struggle across the board.

•DATONE JONES, Defensive End, UCLA (vs. Nebraska).
UCLA's six-sack debut at Rice probably says nothing about its chances of getting to Nebraska quarterback Taylor Martinez, but if anyone is going to do it with any kind of consistency, it will be Jones, the only veteran member of UCLA's front seven who appears clearly bound for the next level. Martinez was barely touched in the course of racking up career highs in yards, touchdowns and pass efficiency last week against Southern Miss, which he may very well top in the Rose Bowl if Jones can't force him out of his newfound comfort zone in the pocket.

•ARTHUR BROWN, Linebacker, Kansas State (vs. Miami).
Brown began his career as a five-star headliner in Miami, only to fizzle out, return to his home state and remake his image as an All-Big 12 tackle machine in Manhattan. Today, his first priority will be stopping his old school's latest five-star hero, Duke Johnson, whose smashing, big-play debut at Boston College…

…suggested he's well on his way to fulfilling the hype in Miami in a way Brown never did. But Brown also has a chance today to at least temporarily curb that enthusiasm.

•MATT SCOTT, Quarterback, Arizona (vs. Oklahoma State).
Last week, Scott accounted for 461 of Arizona's 624 yards from scrimmage, an obvious triumph for Rich Rodriguez's offense until you factor in the series of turnovers and missed opportunities that held the Wildcats to just 17 points in regulation and forced them to go to overtime to finish off Toledo. Oklahoma State's defense can certainly be punctured for big yardage, but the Cowboys also generated more takeaways last year (44) than any defense in college football in nearly a decade. A late-night desert shootout is a given; how long Arizona is able to keep returning fire will depend on how well Scott takes care of the ball without becoming too conservative.