Your Saturday in Detail: SEC gets educated in Aggie math

Share All sharing options for: Your Saturday in Detail: SEC gets educated in Aggie math 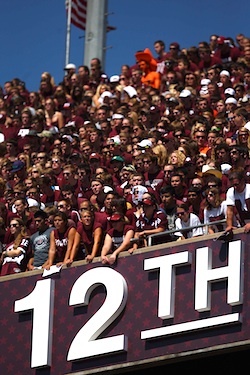 • Miami will outgain Kansas State by more than 100 total yards in Manhattan, but come up short against the Wildcats for the second year in a row after K-State linebacker Arthur Brown – a former Hurricane – returns a Stephen Morris fumble for the eventual game-winning touchdown in the fourth quarter.

• Clearly flustered by the din of cowbells and crowd noise in his first true road game, Auburn quarterback Kiehl Frazier will accidentally call a play that doesn't exist in the Tigers' playbook, which tailback Onterrio McCalebb will subsequently break for a 60-plus-yard touchdown that supplies the eventual margin of victory over Mississippi State.

• Caught off guard in their first encounter with the concept of the "12th Man," confused SEC officials will throw multiple flags against Texas A&M for too many men on the field, the last of which will inexplicably extend a drive that results in a game-winning field goal for Florida.

• One week after being pounded into a fine dust by Alabama, Michigan's defensive line will be gashed by Air Force's triple option attack for more than 300 yards rushing in a down-to-the-wire escape. The Wolverines will trail for the entire second half until an extended, game-winning touchdown drive in the final five minutes, which will require at least one fourth-down conversion by Denard Robinson.

• Washington will open the scoring at LSU on a meticulously scripted, painstaking, 16-play drive on the first possession of the game, only to watch Odell Beckham Jr. return the ensuing kickoff for the first of five consecutive Tiger touchdowns. The Huskies will not reach the end zone again until the fourth quarter.

• Iowa will defeat Iowa State, 24-17, to win the coveted Cy-Hawk Trophy, only to have the result cast in doubt by accusations that several Iowa State players accepted gifts from a local gang of Japanese Macaques to ensure the Hawkeyes covered the five-point spread.

• Frustrated by the sea of red on hand in a competitive loss to Nebraska, UCLA coach Jim Mora will issue an open challenge to fight any Bruin fan who sold his ticket to a Cornhusker on the 50-yard line of the Rose Bowl. There will be no takers, but the following Saturday's game against Houston will be sold out after Mora's shirtless rant appears on TMZ.

• Having dispensed with the ritual "trash talk," Vanderbilt fans and Northwestern fans will let their guard down, bond over their mutual love of Jacques Derrida and leave Ryan Field en masse in the third quarter to discuss the inherent legal and moral implications of recent breakthroughs in neurobiology over foie gras cupcakes.

• Arizona will go over 600 yards of total offense for the second week in a row, but still lose by double digits thanks to four turnovers that lead to points for Oklahoma State. Also, after completing 11 of 11 passes against Savannah State in his first college start, Cowboy quarterback Wes Lunt briefly contemplates his future in the game following his first career incompletion.

• Illinois coach Tim Beckman will decide just prior to kickoff not to play injured quarterback Nathan Scheelhaase at Arizona State, only to eventually bring Scheelhaase off the bench for the game-winning touchdown and two-point conversion in the sixth overtime. "We said all week Nathan was day-to-day," Beckman will say after the triumph, "and it was a new day."