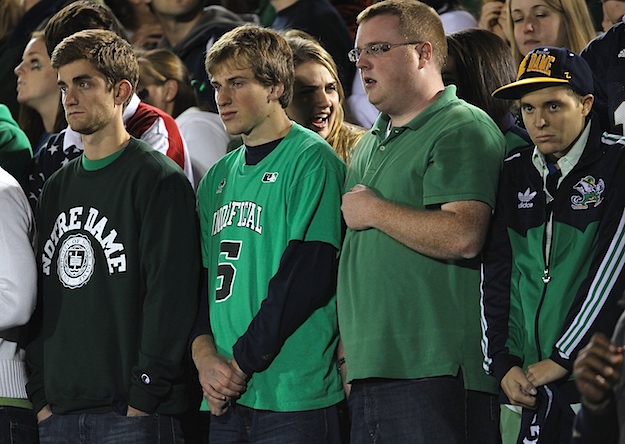 • Echoes don't mind being woken up. Really. In an effort to combat the notoriously funereal atmosphere inside Notre Dame Stadium, the athletic department is launching a new initiative for 2012 home games, "Take A StaND," which politely suggests to Fighting Irish fans that, maybe, under some circumstances, it could theoretically be acceptable to consider the possibility of standing up and cheering at a football game – even if your seat isn't located in the student section! Signs and other "Take A StaND" reminders will be tastefully disseminated across campus for Saturday's home opener against Purdue.

Like most potentially testy breaches of tradition, the catalyst in this case is results, or lack thereof: Notre Dame is just 17-16 at home over the last five seasons, with multiple home losses in all five, and hasn't gone unbeaten in South Bend since 1998, under Bob Davie. In a piece for the Purdue game program, a PR flak for the athletic department gently hints that ND is interested in creating a less welcoming environment for opponents… maybe even, heaven forbid, one that borders on "hostile":

Notre Dame Stadium, its ushers and other University ambassadors have had a long history of extending hospitality to visiting teams. It's common, particularly when an opponent plays in Notre Dame Stadium for the first time, for visiting fans to remark on the welcoming atmosphere they find.

[Athletic director Jack] Swarbrick would like to see that welcome end once the opening kickoff is in the air. He'd like to see a change to the 17-16 home record Irish teams have recorded over the last five seasons combined.

If you're paying attention this weekend and in the weeks to come, you are likely to come across the phrase "Take A StaND." It's a subtle, yet pointed, way of encouraging fans at all Irish events to become more participatory. 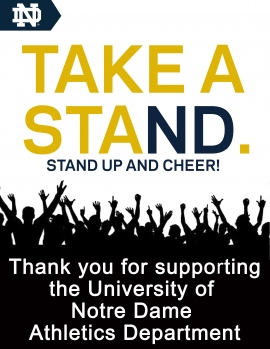 Earlier this week, Swarbrick personally told the South Bend Tribune that he is out to change the culture, specifically the "group of season-ticket holders" who complain about noise and frequently deploy ushers as foot soldiers to quash any potential violation of decorum. Oh, and the piped-in RAWK music that got so many alumni so hot and bothered last season? It's not going anywhere. Deal with it. [Strong and True, South Bend Tribune]

• Technically, everywhere is east if you keep going. Acknowledging the geographical absurdity of the brand after the latest round of conference expansion, the Big East has commissioned a study to consider changing the name of the name of the conference. Next year, with the addition of Boise State, Central Florida, Houston, Memphis, San Diego State and SMU, the league's membership will stretch across the continent, with footprints in all four time zones. (Boise State, a football-only member, will actually belong to the Big East and the Big West at the same time.) Former interim commissioner Joe Bailey said Thursday that the conference may only "tweak a little," rather than come up with a wholesale change, especially considering the lofty, longstanding reputation of Big East basketball: "A brand is extremely important because it tells the marketplace that this is what the Big East stands for. There is so much equity in the name, Big East, what do you do with that?" [Business Week]

• Tiger Drag. LSU will play the rest of the season without its massive, All-SEC left tackle, Chris Faulk, who has reportedly been ruled out with a major knee injury that will likely require surgery and extensive rehab. Faulk started 13 of 14 games last year as a redshirt sophomore, including the SEC and BCS championship games, and came in for a second-team all-conference nod from the Associated Press; coming into this season, he was considered a lock for the first round of next year's draft if he put his name in. Now, it appears he'll have to aim for 2014. [Times-Picayune]

• Happy trails. UCLA running back Malcolm Jones, a former top-100 recruit in 2010, has reportedly decided to transfer after two unproductive seasons as a backup and a third on the horizon. In the season opener at Rice, Jones was fourth off the bench in a 49-24 blowout, adding 10 yards to his career total of 313. Unless he can get this season of eligibility back, he'll only have one remaining at his next destination. [L.A. Times]

Quickly… Robert Nkemdiche's mom says she is "unhappy with Clemson," and that her blue-chip son's commitment there "is not final." … Oklahoma State loses a pair of freshmen to season-ending knee injuries. … One of the most hyped commitments to Florida State's 2013 recruiting class is out for the season with a shoulder injury. … Kansas will have to wait until January for the arrival of a juco lineman who was expected to help this season. … As expected, John L. Smith declares for bankruptcy. … And the Big 12 has finally announced its $2.5 billion television contract with Fox and ESPN, which will include primetime games on Fox – not F/X or one of the regional networks, but the Fox broadcast network, which will be making its first foray into regular season college football. I'm sure they learned a valuable lesson from their much-panned experiment with the BCS.