Already, Pitt is peering into the downward spiral

Share All sharing options for: Already, Pitt is peering into the downward spiral 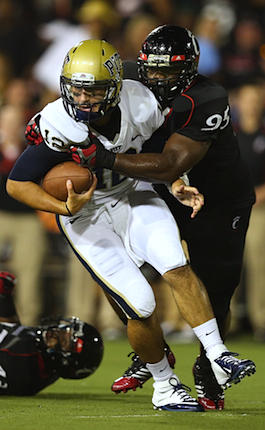 Cincinnati 34, Pittsburgh 10
- - -
1. Every year a middle class team or two suddenly falls into an inexplicable pit of despair, and every indication after two games suggests Pitt is one of those teams in 2012. Last week, the Panthers were comfortably dispatched by an unremarkable FCS team, Youngstown State, led by double digits for essentially the entire second half. Tonight, within the first four minutes of the game, they went three-and-out on offense, allowed a 58-yard touchdown run on Cincinnati's first offensive snap of the season, immediately fumbled the ball back to Cincy and allowed another touchdown pass that pushed the deficit to 14-0. For the game, the Panthers yielded seven plays that covered at least 25 yards. Quarterback Tino Sunseri was sacked seven times.

But besides being merely bad at the usual things – execution, talent, what have you – Pitt also has a distinct penchant for the self-destructive nut punch that defines the truly hapless. There was the aforementioned fumble on the second series, which set up an easy Cincinnati touchdown. Later, down 14-0 with the ball inside the Cincy 10-yard line, Pitt actually punched the ball in for a crucial score that would have cut the lead to just seven points… only to have the touchdown negated by a holding penalty, and then by a Sunseri interception in the end zone that ended the threat. At the end of the half, now down 17-0 and again with the ball inside the Cincy 10-yard line after an 11-play, 69-yard drive that had been extended by three successful third-down conversions, the Panthers came away empty again when Sunseri simply held the ball too long as the clock ran out. It's a bad team, but worse, it's a dumb team.

2. The only unambiguous positive for Pitt: The healthy return of first-rate tailback Ray Graham, who gave no indication that the knee injury that cut his season short last year has cost him any of his All-Big East skills. Tonight, he touched the ball 23 times (up from 14 in the opener) for 154 yards, more than half of them coming on the Panthers' two longest gains of the night: A 50-yard run into Cincy territory that helped set up a field goal in the third quarter, and an ad-libbed catch-and-run from Sunseri in the second quarter that Graham took for 31 yards. If there's any hope at this point, it's in building the offense around the only truly standout talent on the team, and then praying he can handle the load.

3. Geography notwithstanding, Cincinnati and Pittsburgh are not bitter, confirmed rivals or anything – they'd played twice before Cincy joined the Big East in 2005 – and with Pitt's pending defection to the ACC next year, no one is going to mourn the series or its unwieldy avatar, the Paddlewheel Trophy, the most random mess of a trophy in sports:

The trophy is designed and named in honor the historic link between the cities from the days in the 19th and early-20th centuries when Paddle wheel-powered boats traveled between the two cities along the Ohio River. The trophy stands 46 inches (120 cm) tall and weighs 95 pounds (43 kg). Mounted on the base is an authentic brass, engine-room telegraph that is a working model that was set for use on a ship in Seattle, Washington. The face of the trophy's telegraph was redesigned with logos from both teams on either side that can light up. The lever can be pulled to the side of the school who has won which also causes the ringing of bells. The front includes a steel plate featuring a carved outline of Allegheny, Monongahela Rivers and Ohio River as it runs from Pittsburgh to Cincinnati. The 22 by 8.5 inches (56 by 22 cm) base is made out of Ipê wood. The trophy was designed by the architectural firm of Robert Busch and Karl Wallick, the steel plate was manufactured by Vulkane of Cincinnati, and the remaining trophy was manufactured by Trophy Awards Manufacturing. Over 175 man-hours of design and labor went into its construction.

Unfortunately, it can never be destroyed, lest the evil, Wannstedtian powers lurking deep within escape and wreak stultifying mediocrity on the tri-state area.

4. Cincinnati didn't get any respect as a potential Big East contender in the preseason magazines, despite a) Owning the best overall and conference record of any remaining member over the last five years, b) Earning at least a share of three of the last four Big East titles, including last year's three-way split with West Virginia and Louisville, and c) Prominently featuring players named "Leviticus Payne," "Silverberry Mouhoun," "Innocent Macha" and of course, "Munchie Legaux." But they certainly looked the part tonight, especially on offense, which was one big play after another, most of them Munchie-related.

True, we don't have much context yet for hanging big numbers on Pitt or anyone else in the conference, and Legaux (for now) looks like an inconsistent, feast-or-famine passer who's going to have a few rough afternoons. But he can obviously run, and UC coaches obviously know how to exploit his ability to run, and when I scan the quarterback situation across the Big East, I don't see any reason Legaux can't push Louisville's Teddy Bridgewater as the best quarterback in the conference. The Bearcats are going to continue to be a factor. 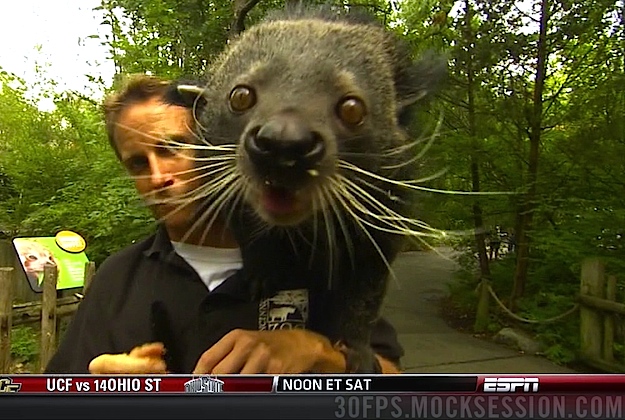 Go ahead. Tell him he doesn't exist to his face.