Morning Bell: Ohio State has its eyes on a tangible prize, after all

Share All sharing options for: Morning Bell: Ohio State has its eyes on a tangible prize, after all 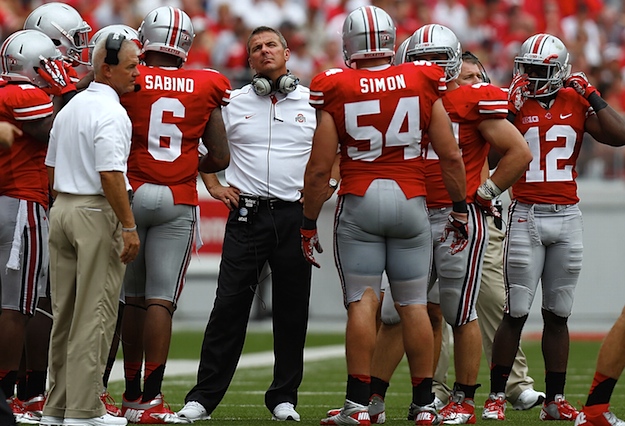 • So you're telling me there's a chance. Back in May, Big Ten commissioner Jim Delany took a thinly veiled shot at Alabama's most recent BCS title when he conceded he "[doesn't] have a lot of regard" for champions that failed to win their own division. An interesting stance from a guy whose own conference, it turns out, could conceivably be won this year by a team that officially didn't win its division:

Despite its postseason ban passed down by the NCAA, Ohio State can officially be recognized as the Leaders Division champion this season. If Ohio State wins its half of the Big Ten, the Leaders Division would then be forced to send its second-place team to the Big Ten title game in Indianapolis. That's league policy and has always been known…
[…]
What was unclear is the fact that the Buckeyes can still play for some hardware.

"If a team plays eight games and all eight games count and at the end of the year they're atop the division, then they are division champions," Big Ten assistant commissioner for communications Scott Chipman said in a phone call today. 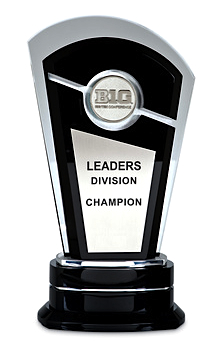 Semantics, yes, but still enough to put an end to the notion that Ohio State and Penn State "don't have anything to play for" because they can't play in the Big Ten Championship Game or a bowl game. More importantly, it means there could be a little extra money to be made: After the last couple years at Ohio State, officially licensed t-shirts honoring the "Leaders Division Champions" might make for a nice seller in Columbus, don't you think? [Cleveland Plain-Dealer]

• Can't catch a break. Just two weeks removed from being cleared to practice and play following offseason knee surgery, Virginia Tech wide receiver D.J. Coles has learned he will miss the rest of the season with another knee injury he suffered in the first quarter of Monday night's win over Georgia Tech. (The more recent injury is reportedly on the same knee he hurt last fall, when he tore his PCL, but is not the same injury.) The good news: Because he was sidelined in the season opener, Coles will likely be granted a sixth year of eligibility in 2013 as a medical hardship. That is, if he still wants it. [Washington Post]

• There are certain appearances to uphold. Michigan's offensive line, like everything and everyone unfortunate enough to be placed in the path of Alabama's defensive line, was thoroughly dominated Saturday to the tune of 69 yards rushing on just 2.4 yards per carry, with only one run that gained more than nine yards. (In his weekly play-by-play breakdown, leading Wolverine obsessive Brian Cook graded the line's effort against 'Bama as the "all time worst" he's ever reviewed.) The only member of the front five who didn't come out with a negative score for the game, per Cook: Left tackle Taylor Lewan, who nevertheless said Wednesday he's already personally addressed the rest of the line about not getting its ass kicked so thoroughly in front of so many of the burliest Michigan Men that came before them.

"The offensive line has to understand that Michigan has such a tradition of great offensive lineman and there's so many guys every Saturday watching us," Lewan said. "The Jake Longs, the Jon Jansens, they're watching us. When you have (69) yards rushing, I take that personally, and I know they do, too. From an offensive line standpoint, it was embarrassing." [Detroit News, MGoBlog]

• Welcome back Walker. Oklahoma coach Bob Stoops confirmed Wednesday that senior defensive tackle Casey Walker will be back with the team this week after missing the Sooners' opener at UTEP for undisclosed personal issues. (Another senior starter at defensive tackle, Stacy McGee, was suspended, cutting OU's depth on the line to the bone.) Walker's mother told the Oklahoman her son "is great," but he's still expected to miss Saturday's visit from mighty Florida A&M before returning to the rotation in time for [BYE]. [Oklahoman]

• He had it comin' your honor. I think this pretty much speaks for itself:

STILLWATER — Oklahoma State University police say one student was sent to the hospital after he got into a fist fight with his roommate over football.

Capt. David Altman says the students are roommates in Davis Hall. He tells a local newspaper that the pair got into argument over the value of a football as a sport.

Altman says the victim was punched several times by his roommate after the victim said football was a stupid sport.

Prosecutors will determine whether charges will be filed. I'm not an attorney, but I just assume that violence in defense of the game of football is protected under Oklahoma law. [Oklahoman]

Quickly… USC tailback D.J. Morgan is undergoing "minor" knee surgery that will keep him out at least three weeks. … Washaun Ealy, now at Jacksonville State, has been arrested again on marijuana charges. … South Carolina still doesn't know if Connor Shaw will play against East Carolina. ... LSU's massive left tackle, Chris Faulk, will miss Saturday's game against Washington with "a bit of an injury." … Meanwhile, in Seattle, the Huskies' preparatory tiger was nowhere to be seen at Wednesday's practice. … Alabama players can only be injured by other Alabama players. … And the inevitable rise of Biff Tannen has begun.