Curb Your Enthusiasm: Nick Saban isn't buying the narrative of Alabama, juggernaut. When should we?

Share All sharing options for: Curb Your Enthusiasm: Nick Saban isn't buying the narrative of Alabama, juggernaut. When should we?

Nick Saban's team is the No. 1 team in college football according to pretty much everyone, and he is pissed off:

That outburst came at the end of a practice in which "more four-letter words were flying… than we heard the entire month of August." (Per al.com beat writer Don Kausler Jr., "it would be easier to list the players who aren't getting yelled at.") It is also the sentiment of a man who's been here before, and been burned. 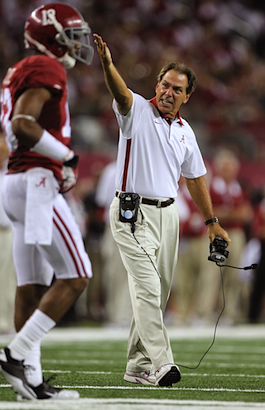 Some of his older players have, too, the last time Alabama was ranked No. 1 in the regular season: October 2010, on the heels of back-to-back wins over No. 10 Arkansas and No. 7 Florida, the latter a brutal, 31-6 demolition from which the Gators still have not recovered. Then, as now, 'Bama was the defending national champion, and was also riding the nation's longest winning streak at 19 games. Then, as now, they were attempting to replace a majority of starters off the nation's best defense with a similarly talented but alarmingly green crop of up-and-comers, and then, as now, they appeared to have done so successfully. Then, as now, the local media could barely be restrained from punching the Tide's ticket to the BCS title game. Then, yours truly personally observed that, "looking ahead from Oct. 5, 'Bama seems more entrenched and unmovable from the top of the polls than any team since USC went coast to coast at No. 1 in 2005."

Now, of course, we know that the irresistible juggernaut described there was just days away from a stunning defeat at South Carolina – viva Garcia! – and would lose twice more by the end of the regular season, against LSU and Auburn, both times as a slight favorite. By December, the same team that seemed utterly invincible five games into the season had fallen all the way to 15th in the polls after blowing a 24-0 lead against its most bitter rival on its own field.

There are many, many other examples – since 2004, the earliest any eventual BCS champion has occupied the top position in either poll is Week 6 (see LSU in 2007), and the '07 Tigers would go on to lose twice from that point en route to their improbable coronation* – but they aren't really necessary. At least, from Saban's perspective, they shouldn't be: Even if his "outburst" is more of a motivational gimmick to fend off complacency than a genuine expression of frustration with a team that just stuffed Michigan's body into a burlap sack and threw it off an overpass, the juniors and seniors on this team know first-hand how quickly the aura of inevitability can be pierced. They repeat Saban's mantra of consistency and "process" pretty much all the time:

"[Saban] told us that that was just the first game, so don't get all hyped up about that," junior linebacker C.J. Mosley said. "We've got a lot more games to come and we've got a lot more improvement to do."
[…]
"I think everyone understands our goal wasn't to beat Michigan," center Barrett Jones said. "It was great. But our goal is to win the national championship. This was the first step in that journey, but we have a long way to go."
[…]
"We're just not really worried about where we're ranked in the polls right now," junior cornerback Dee Milliner said. "We won our first game. That's really all this team has done."

Can't argue with that, not that anyone in Saban's locker room has a choice. As the season goes on, though, and the wins pile up, it's also going to be harder to argue with the enthusiasm of the external coronations – right up until, without warning, it's not. In 2010, that moment was at South Carolina. Last year, it was in overtime against LSU. This year, for now, it's only in Nick Saban's nightmares, where he would very much like it to remain for the next four months.

- - -
* In fact, aside from LSU in 2007, only other eventual BCS champ since '04 has been ranked No. 1 in the AP poll at any point prior to December: Alabama in 2009, which wrested the top spot from Tim Tebow-led Florida for exactly one week in mid-October before ceding it back for the remainder of the regular season.