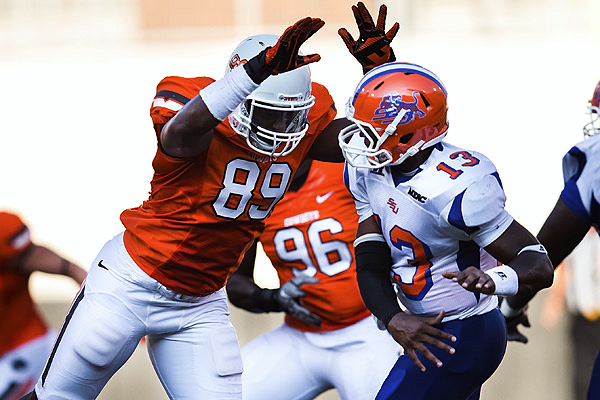 Having not endured quite enough humiliation in the wake of an 84-0 obliteration at Oklahoma State, poor Savannah State will now go into Florida State Saturday as the first 70-point underdog in recorded gambling history. (For some more context on just how outmanned the Tigers are here: Last year, they were 1-10 and lost by at least 40 points apiece to Southeastern Louisiana, Florida A&M, Norfolk State and Bethune-Cookman.) They may have to start taking knees in the third quarter to avoid it, but shame on the 'Noles if they manage to hit this cover.

Before you jump on Florida State for this game's existence, though, remember that FSU didn't want it, either: It had no other choice after West Virginia backed out of a game in Tallahassee scheduled for this weekend in February - not because of any conflict, but simply because WVU wasn't interested in clearing such a high hurdle before it hit the nine-game conference schedule in the Big 12. Desperate to fill the home date, Florida State agreed to pay Savannah $475,000 for the privilege of getting its head kicked in on "Band Day."

In fact, instead of making up one half an above-the-fold showdown between two top-10 teams that would unquestionably reign as the showcase game on a weekend that doesn't feature a single other match-up ranked teams, the Mountaineers aren't playing this weekend at all – they're enjoying a bye week between oh-so-strenuous dates with Marshall and James Madison. By halftime, the Seminoles may be wishing they weren't, either.