Morning Bell: NCAA confirms it's back on the old USC beat

Share All sharing options for: Morning Bell: NCAA confirms it's back on the old USC beat 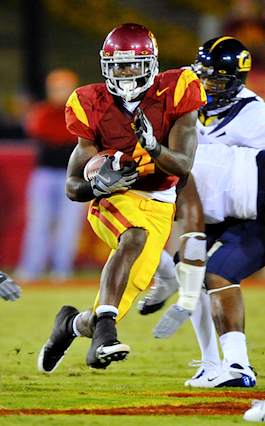 • Just in case you were wondering. The NCAA confirmed Tuesday that it is investigating charges that ex-USC running back Joe McKnight accepted a car and a plane ticket from a former Los Angeles County tax appraiser, Scott Schenter, who is now facing several dozen corruption charges. According to the L.A. Times, old e-mails obtained through an open records request show that a) McKnight was in possession of a Chevrolet Monte Carlo owned by Schenter in 2009, a charge that was reported at the time, denied by Schenter and eventually cleared by USC, and b) Schenter purchased a plane ticket from Los Angeles to New Orleans (McKnight's hometown) in 2008 for passenger "Joe McKnight." This time, Schenter has reportedly confirmed the transactions.

Per an official statement from NCAA spokesman Stacey Osburn: "Any time the NCAA receives credible, new information regarding potential major violations we will look into the issue. USC has been working cooperatively with us regarding the matter." But as for "repeat offender" status on the heels of the sanctions handed down against USC in 2010, the timing of the (alleged) McKnight violations makes that designation unlikely: "For a school to be considered a repeat violator, at least one major violation must have occurred within five years after the penalty for the previous case." [L.A. Times, Orange County Register]

• Hold your horses. Barring injury in front of him, Stanford will "most likely" redshirt freshman tailback Barry Sanders, according to coach David Shaw, relegating college football's most anticipated Hall-of-Fame spawn to the bench until further notice. Shaw was a four-star recruit sought by most of the country last year out of Oklahoma City, but obviously doesn't appear to be making any moves on All-Pac-12 senior Stepfan Taylor or sophomore backup Anthony Wilkerson at the top of the depth chart. [@wilnerhotline]

• Next time, let's answer "no" while nodding. Georgia's coaches are being deliberately vague about the status of suspended defensive starters Alec Ogletree and Bacarri Rambo for Saturday's SEC opener against Missouri, and apparently enjoying trolling reporters about it: Asked again on Tuesday, Mark Richt said with a smile, "I would say I'll let y'all know when the time comes." Defensive coordinator Todd Grantham was more blunt: "Here’s what I think: I don’t know why you would tell anybody because it is not a league rule. And unless everybody is going to disclose all their information, why would you talk about your team in that regard?"

For all that paranoia, back in Columbia, Missouri coach Gary Pinkel sounds like he could really give a shit either way. "You prepare for the scheme. Obviously, I don't know if [Ogletree and Rambo] are going to be back or not. We can't worry about that. We have enough things to be concerned about that we have control over. If they play, they play." [Atlanta Journal-Constitution, Athens Banner-Herald, Columbia Tribune]

I'm calling it right now: That is going to clean up at the MAC Film Festival. [OhioBobcatTV]

Quickly… Tulane's first-year coach, Curtis Johnson, will be back at practice today after being hospitalized with heat exhaustion on Tuesday. … As expected, Tulsa's top wide receiver is out for the season with a torn ACL. … Fitzgerald Toussaint will be back in the lineup Saturday for Michigan's home opener against Air Force. … TCU suspends starting wide receiver Skye Dawson for Saturday's opener for "violating school policy." … Ohio State players study film on university-issued iPads. … As expected, an ex-Buckeye lineman lands at Toledo. … San Diego State coach Rocky Long defends his aggressive approach on fourth downs and two-point conversions. … A look at Chicago's original Big Ten, the Chicago Maroons. … At ESPN not all "Sources" are created equal. … Brett "Sources" McMurphy has an unusual definition of "fun." … And Oregon State's marketing team is not even pretending to be coy anymore.