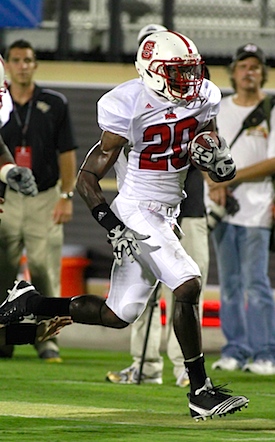 • . N.C. State announced Monday that senior cornerback C.J. Wilson, a three-year starter with three career interceptions returned for touchdowns, has been suspended by the NCAA for the first four games of the season on academic grounds. In fact, Wilson graduated last December, but subsequently failed to pass enough credit hours in the spring to remain eligible under the new standards. According to coach Tom O'Brien, it was only Wilson's extra work over the summer that kept him being from suspended for the entire season.

"He put himself in a hole and had some family issues and thought he could save himself and he didn't," O'Brien said. "The NCAA said we'll give you four games instead of a year suspension because of the fact that he was a graduate ... and he had extenuating circumstances during the semester. He came back and demonstrated to them that he would be serious going forward." [Raleigh News & Observer]

• . All-Big Ten tailback Rex Burkhead will not need surgery on the banged-up knee that kept him out of the last three quarters of Nebraska's opening day win over Southern Miss, which means he will be back this season (yay!). Whether he's good enough to go Saturday at UCLA, however, has yet to be determined (boo!). Against USM, Burkhead took his second carry of the season 57 yards for a touchdown before getting hurt on the next series, but the rest of the team combined for well over 200 yards rushing of their own amidst a career passing day for Taylor Martinez, so pick your poison. [EyeOnCFB]

• . If there was any question after Saturday, Michigan quarterback/wide receiver Devin Gardner has all but removed the slash to focus on receiver. Against Alabama, Gardner started at wide out, had the first pass of the season thrown in his direction and finally made his first career reception on a 44-yard touchdown catch in the third quarter. Meanwhile, garbage time snaps at quarterback (or the garbage-time snap, as it turned out) went to redshirt freshman Russell Bellomy.

"I would say [Gardner]'s a wide receiver, first, and then a quarterback depending on where you're at in the game or the week," coach Brady Hoke said on Monday, though he also suggested that shifting Gardner from one position to another during a game, "in the heat of the battle," is only on the table a last resort. "Russell has really had a great fall camp. I'm very proud of how he's progressed." [Detroit News]

• . Vanderbilt coach James Franklin said Monday that he heard from the SEC almost immediately after last Thursday's loss to South Carolina re: the bogus non-pass interference call on the Commodores' last snap of the game…

…which would have kept Vandy's hope for a go-ahead/game-winning touchdown alive. But Franklin refused to say anything about that conversation. "For some reason, you guys [the media] don't like me and want to make sure I get fined," Franklin said. "When we start being able to spread the gap and have more significant wins where every call is not so important, they won't cut as deep for us. But when every game we are fighting so hard for every inch on the field and our kids have to play with such passion and emotion, when you do get a tough call in either direction ... it seems like a really tough call. But that's just kind of where we are." [Associated Press]

Quickly… Miami's new depth chart finally includes Seantrel Henderson, albeit as a backup. … Tulsa's leading receiver is out with "a significant knee injury." … Cal sells tickets to seats that do not exist. … Maryland installs hydraulic goalposts, apparently in anticipation of big wins. … Lane Kiffin is perfectly fine with his star quarterback and receivers airing their grievances on the field. … John L. Smith prank calls a beat writer. … Will Muschamp gets a gift basket from the mayor of College Station. … And Sheldon Richardson learns the first rule of media relations: Never say anything remotely interesting to the media, under any circumstances. Listen and learn from Bob Stoops, Sheldon. Listen and learn.