Georgia Tech, Virginia Tech punt America to sleep. Then it gets interesting.

Share All sharing options for: Georgia Tech, Virginia Tech punt America to sleep. Then it gets interesting. 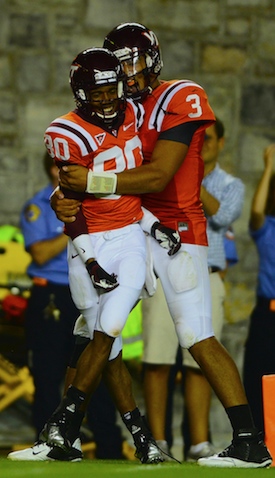 Virginia Tech 20, Georgia Tech 17 (Overtime)
- - -
1. It was not a serene evening in the homes of David Romer disciples and other enemies of the punt: Not only did the offenses combine for a stupefying 13 punts between them, but six of those punts were launched inside of opposing territory. Most egregious: A Virginia Tech punt from the Georgia Tech 34 in the second quarter that netted a whopping 14 yards following the inevitable touchback. So worth it!

Frank Beamer and Paul Johnson always drive just below the speed limit and have all their money in mutual funds.

2. So it is all too appropriate that the real drama of the night was the product of a pair of do-or-die fourth-down plays in the final two minutes of the fourth quarter. First, with Georgia Tech down 14-10 and facing 4th-and-6 from the VT 37, quarterback Tevin Washington ad-libbed for time in the pocket until he was able to thread the ball to B.J. Bostic on the sideline with three Hokies on his back. (I'll go ahead and add here that putting that ball on the money, in that tight of a window, in that situation, made for the greatest throw Tevin Washington will make in his life, by far, as his final attempt of the evening confirmed; see below.) A few seconds later, the Yellow Jackets now leading 17-14 courtesy of Washington's subsequent touchdown pass to Deon Hill, Virginia Tech met its own fate on 4th-and-4 from midfield, and throttled it with a 23-yard hook-up from Logan Thomas to Corey Fuller that set up the tying field goal.

If either of those plays fails, the best ending of the opening weekend fizzles anticlimactically into a series of kneel-downs. Frank Beamer and Paul Johnson feel dirty and ashamed to have been a part of it. But a little bit exhilarated, too.

3. I was very much on the Logan Thomas bandwagon at the start of the night, and by the start of the fourth quarter I was beginning to look for a place to abandon ship. Through the first 50-odd minutes, Thomas had attempted 31 passes, completing 15 for 105 yards (a paltry 7.0 per completion) with a long of sixteen. midway through the fourth, he was starting to resemble the world's most physically impressive t-shirt cannon: Plenty of velocity, but only the vaguest notion of where the projectile is eventually going to land. He struggled with his reads and his accuracy, and hadn't done anything particularly awe-inspiring as a runner, either. The Hokies had failed to score on eight consecutive chances with the ball since the second possession of the first quarter. If not for the defense keeping Georgia Tech's offense wallowing in the same hole, realistic hope for a comeback would have been long gone.

And then he uncorks this cruise missile that's going to make him $10 million to a true freshman:

That throw put the Hokies up 14-10 with just under eight minutes to go; the next time Thomas touched the ball, he was 4-for-4 passing with two long gains to Fuller on the drive that set up the tying field goal that pushed the game into overtime. When he figures out how to put an entire game together, instead of just the beginnings and endings, defenses will be helpless to oppose his will. But I'm also not sure he's still going to be in college by the time that happens.

4. Clutch as he was on his team's final drive of regulation, Washington left as the goat after serving up a desperate, off-balance pick that let all the air out of Georgia Tech's balloon – an apt description for the pass itself, which wafted deliberately, gently into the hands of Kyle Fuller, like a mylar balloon falling in slow-motion from a high ceiling. It was the worst throw of the last 96 hours, and on third down, it was completely unnecessary: At least if he'd thrown the ball away, the Jackets could have come away with a field goal and handed the baton to the defense. Blessed with such a rare gift, the Hokies methodically tunneled to the two-yard line, kicked through the equivalent of an extra point for the win and began preparing for bed.

5. That swing for Washington – from regulation hero to overtime goat in a matter of minutes – could ultimately mean the difference in a conference championship and a bid to the Russell Athletic Bowl. Since the ACC split into two divisions in 2005, all seven Coastal Division title have come through the winner of Georgia Tech-Virginia Tech, and the Yellow Jackets and Hokies' remaining conference schedules are identical with one notable exception: Georgia Tech gets Maryland from the Atlantic Division, Virginia Tech gets Florida State. But with the head-to-head tiebreaker in its pocket, Virginia Tech has also bought itself a little breathing room to afford a loss without automatically ceding the top of the standings. Even when the Hokies are young, inconsistent, "rebuilding" in some fundamental way, even when they're fairly maddening, until further notice, they're still kings of their corner of the fiefdom.