Reaction Time: In which Tyler Bray is gaslighting Derek Dooley

Of all the self-inflicted daggers Bray has wielded in his career, none has cut quite as deep as his game-killing fumble in Athens, and nine other reflections on Saturday's games, from Sunday.

Share All sharing options for: Reaction Time: In which Tyler Bray is gaslighting Derek Dooley

1. Georgia 51, Tennessee 44
- - -
When he's good, Tyler Bray is as good as any quarterback in the SEC, which only bolsters theories on days like Saturday that he's actually a sleeper agent on a covert mission to drive Derek Dooley into a state of gibbering insanity. Of all the self-inflicted daggers Bray has wielded over the last three years, none has cut quite as deep as his late, game-killing fumble in Athens, which should not have come as a surprise – it is Tyler Bray's raison d'être to absentmindedly push the wrong button, pull the wrong cord, lock the wrong door, nudging his beleaguered head coach ever closer to the edge – but somehow did after Bray completed four passes to move the Vols within striking distance of the tying (or potentially winning) touchdown. He'd already thrown two interceptions to that point, and somehow Tennessee was still in the game despite being gashed for 500-plus yards by Georgia's suddenly ferocious offense. What else could possibly go wrong? Depending on what happens over the next month against Mississippi State, Alabama and South Carolina, that may well be the epitaph for the Dooley era.

Meanwhile, amid hosannas for their emerging freshman heroes in the backfield, Todd Gurley and Keith Marshall, Georgia fans have to have at least a twinge of doubt over the championship credentials of a defense that just got diced up for 478 yards. The blame for three of Tennessee's six touchdowns falls on turnovers by the UGA offense (a concern in its own right), but five games in, the Bulldogs have yielded big plays in all five and have yet to hold an opposing offense below 300 total yards. Last year, they finished fifth nationally in total D; they currently rank fifty-fifth. 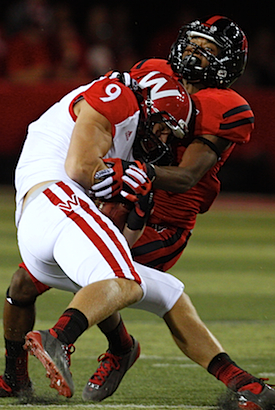 2. Nebraska 30, Wisconsin 27
- - -
Wisconsin scored touchdowns on three of its first four offensive possessions and led this game 20-3 in the second quarter, at which point it remembered that it's 2012 and Wisconsin is terrible now: The Badgers' last nine possessions resulted in five punts, two fumbles, a missed field goal and a short-field touchdown set up by a Nebraska turnover, in perfect accord with their decline over the first four games. Including negative yardage on sacks, the ground game netted 56 yards on 1.4 per carry, leaving the offense as a whole (still) sitting in dead last in the Big Ten in rushing offense and total offense – categories Wisconsin dominated, of course, en route to back-to-back Rose Bowl runs in 2010 and 2011.

Unlike Wisconsin, Nebraska doesn't play in a division in which arguably the top two contenders are both ineligible to play for the conference championship. That fact alone makes the Cornhuskers' path to Pasadena a longer one than Wisconsin's, regardless of the finally score Saturday night. But it certainly doesn't look as it long as it would have if they hadn't managed to rally from 17 points down in the second half, the most impressive half of football by a Big Ten team to date.

3. Alabama 33, Ole Miss 14
- - -
Last week, it was LSU coming in for ritual hand-wringing over the offense after a limp effort against Auburn. This week, it's the Crimson Tide's turn on the heels of an uninspiring night against the Rebels – the same Rebels that finished dead last in the SEC in both total and scoring defense in 2010 and 2011 and were last seen getting bombed for 676 yards and 66 points by Texas on their own field. Alabama led comfortably for most of the last three quarters, thanks to the always impenetrable defense, but turned in a paltry 305 yards of total offense at the end of the night, due mainly to a ground game that managed just 3.7 yards per carry and didn't reach the end zone. Last year, Alabama rolled up 389 yards and six touchdowns rushing in Oxford, on 9.8 per carry; the only defense that held the Tide below 150 yards yards on the ground or without a rushing touchdown last year was LSU in the regular season.

Yes, this is quibbling with a 19-point conference win that was never in doubt, which is about as interesting as it gets these days re: the Alabama Death Star. But for arguably the first time this year, a key sector was not looking particularly well-oiled.

4. Ohio State 17, Michigan State 16
- - -
For some reason I feel suddenly compelled to use the verb "hunker," as in, "The Buckeyes and Spartans hunkered down into exactly the slow, conservative battle of attrition everyone expected," complete with Michigan State's ground game (34 yards on 22 carries, with a long gain of 8) in the role of doomed infantry. There was a smattering of big plays – see Braxton Miller's weekly bomb to Devin Smith – but far fewer of them than there were, say, punts.

At least Carlos Hyde was willing to do his part to make the punts interesting:

5. West Virginia 70, Baylor 63
- - -
Once everyone regains their breath and the color returns to their faces, it may begin to dawn on them just how badly burned the West Virginia secondary was in this game, and what those scars portend with Texas (in Austin), Texas Tech (in Lubbock), Kansas State, TCU, Oklahoma State (in Stillwater) and Oklahoma on deck. The Mountaineers do rely heavily on a handful of freshmen – Karl Joseph, K.J. Dillon and Nana Kyeremeh were all victimized on touchdowns – who may have just experience the nadir of a steep learning curve, but veterans Pat Miller, Brodrick Jenkins and Darwin Cook were getting posterized right along with them. Even folding Baylor's numbers Saturday into the cakey non-conference slate, no top-10, BCS worthy contender can sustain a pace that has it allowing 33 points on 474 yards per game.

On the other hand, the Mountaineers are also leading the Big 12 in sacks, tackles for loss and turnover margin, and have already scored two defensive touchdowns in four games, which are all good ways to cover up the occasional blemish. (Their few stops on Saturday were all the result of pressure on Nick Florence.) But given the upcoming schedule, this group is a long way from "occasional."

6. Louisville 21, Southern Miss 17
- - -
Under most circumstances, a 2-of-8, 25-yard passing effort from your starting quarterback would qualify as a disaster. In this case, Southern Miss' Ricky Lloyd probably deserves credit for putting up that line in a disaster:

Alas, even a Biblical deluge, the Golden Eagles' 11-point lead couldn't hold: Louisville scored 15 unanswered points in the second half, dropping USM to 0-4 for the first time since 1976, and one step closer to its first losing season since 1993.

7. Oregon State 38, Arizona 35
- - -
I have no idea what we'll be saying about Wisconsin, UCLA or Arizona at the end of the season, but I do know that the Beavers have looked increasingly explosive on offense in the course of beating each of them, and there is no end in sight until Stanford and Oregon show up on the schedule in November. The secondary came out looking a little worse for wear against the Wildcats, yielding 403 yards and three touchdowns to 'Zona quarterback Matt Scott, but it also picked Scott off twice. Opposite suddenly prolific Sean Mannion (29-of-45, 433 yards, 3 TDs, 0 INTs), there is some margin of error. Based on its resumé, Oregon State is a top-10 team, easily. We'll see how many it has to win before the mainstream polls agree.

8. Cincinnati 27, Virginia Tech 24
9. Middle Tennessee 49, Georgia Tech 28
10. Miami 44, N.C. State 37
- - -
First of all, two of these games ended on ridiculous, more-or-less Hail Mary touchdowns in the final seconds, one of which was thrown by a quarterback named "Munchie," and who doesn't love a good Hail Mary? So, Hail Mary, deja vu edition:

I guess it's a weekly thing now where I promise I'm not jumping on the non-existent Miami bandwagon following a dramatic 'Cane win, but what it's worth, is there any denying that the U is the best team in the ACC's Coastal Division right now? The losses by Virginia Tech and Georgia Tech don't have any bearing on the conference standings, where Miami is out to a tenuous but very real lead at 3-0, but given the Hokies' dismal flop at Pittsburgh a couple weeks back, and Georgia Tech's deflating losses to Virginia Tech and Miami in the first four weeks, the challengers to the title have been effectively eliminated. Which certainly isn't enough to make the Hurricanes good – I watched the entirety of the 52-13 beatdown they took at Kansas State, so I'm not about to suggest that – but there is no indication at this point that it's going to take that much to win this half of the conference.

Then again, this just about the point in the season when Virginia Tech (1-0 in conference) tends to put its early struggles in the rearview and bend the rest of the ACC to its hardscrabble will. I'm not sure who's going to stop the Hokies from doing that, either, unless it's the Hokies.