Texas survives with a surplus of cold, hard Ash

After two years in the wilderness, the Longhorns have a quarterback and a familiar perch in the Big 12 pecking order.

Share All sharing options for: Texas survives with a surplus of cold, hard Ash

Texas 41, Oklahoma State 36
– – –
1. First things first: I cannot make heads or tails of anything happening in the goal-line jungle on Joe Bergeron's winning touchdown run for Texas, including whether Bergeron actually a) Crosses the line with the ball, or (more importantly) b) Loses the ball in the process. This play ends with 29 seconds on the clock:

Obviously, that's not the most high-quality video (nor is it the most Zapruder-like), but the live, high-definition look during the broadcast was no more decisive. It seems fairly clear to me that the ball probably did not cross the line, which is of very little consequence considering Texas could have just lined up to run it again, or simply let the clock run down and knocked in a chip-shot field goal to win. Oklahoma State is better off if Bergeron scores there than if he doesn't, because at least then it has an opportunity (however slim) to answer.

A fumble, of course, effectively wins the game for the Cowboys on the spot. On that point, I'm willing to concede that the ball does come loose in the scrum, although I'll be damned if I can discern when, or whether Bergeron was already down. (On the broadcast, Gus Johnson and Charles Davis seemed far more certain than I am, because I can't see a thing in there.) Under the circumstances, I don't think there's nearly enough evidence for Oklahoma State to lodge a legitimate complaint.

2. As to the circumstances: That relatively piddling play was the cherry on top of a clutch drive covering 75 yards in eight plays, the first 70 coming exclusively from the arm of the Longhorns' sophomore quarterback, David Ash. For the night, Ash was 30-for-37 passing for 304 yards and three touchdowns – all to Jaxon "Don't Call Me Jordan" Shipley – but it was on that final drive that he really came of age, most notably on a do-or-die, 4th-and-6 completion to D.J. Grant that covered 29 yards into OSU territory. Two plays later, Ash connected with Mike Davis for 32 yards to the OSU 5-yard line, setting up Bergeron's decisive plunge. Texas closed the game by stringing together three extended, 75-yard touchdown drives on its final four offensive possessions on which Ash completed 12-of-13 for 124 yards and a touchdown. All three drives came in response to Oklahoma State scores. 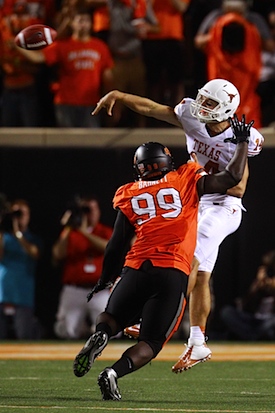 Ash was also picked off in Cowboy territory in the third quarter, his first interception of the season, and sacked four times without a positive gain on the ground. But the difference so far between the gangly, turnover-prone freshman who couldn't hold on to the starting job in 2011 and the steady sophomore hand who brought the Longhorns back tonight is obvious and immense. At the moment, Texas appears imminently capable of keeping the pedal down alongside the manic spread attacks that dominate the conference, which hasn't been the case in a long time. I think it's safe to assume the two-year odyssey in search of a reliable, championship-caliber quarterback is over for the foreseeable future.

3. Oklahoma State has now lost two games in less than a month in which it thoroughly dominated the conventional statistics, most notably total yards and yards per play. At least at Arizona the failure was easily explained by a –4 turnover margin. Tonight, the Cowboys outgained Texas by 142 yards, 582 to 440, finished dead even in the giveaway/takeaway ledger and still came up short.

In fact, if Oklahoma State had a checklist of priorities coming into this game, it seemed to accomplish everything on it. Offensively, the Cowboys effectively balanced the run (275 yards) and pass (307 yards), only punted twice and only turned the ball over once. Defensively, they held Texas' running game in check, limiting the 'Horns to 136 yards on 3.2 per carry. For the game, OSU averaged a full three yards more per offensive snap, a huge margin that usually portends corresponding dominance on the scoreboard.

4. In this case, The Longhorns were able to close those gaps on the stat sheet with the help of several equalizers. One was a first quarter interception by safety Kenny Vacarro in OSU territory, setting up a quick touchdown on the second of Ash's three scoring strikes to Shipley. Later in the first, D.J. Monroe answered an Oklahoma State touchdown with a 100-yard kickoff return that pushed Texas' lead to 21-14. From there, the Cowboys' offense left points all over the field, settling for field goals on three separate occasions inside the UT 20-yard line, and missing on a fourth.

Meanwhile, Texas amassed a 13-minute advantage in time of possession, turned three fourth-down conversions into points and finished all but one opportunity in Cowboy territory with a touchdown. Along with Monroe's kick return, Texas ran 13 more plays than Oklahoma State, 80 to 67, which amounts to an extra offensive possession for the Longhorns. Which turns out to be exactly what they needed.

5. One of the small frustrations for Texas fans through the first three games was the limited touches for sophomore Malcolm Brown, who is widely regarded as the best of the Longhorns' three-headed tailback rotation, and who may have proven the point tonight in his absence: After Brown left with an ankle injury in the first quarter, Bergeron and freshman Johnathan Gray found very little going between the tackles, against a defense that's never been known for resistance to the run. With Brown or without, that's an issue they need to solve before the next stop in the gauntlet, a much-anticipated visit from West Virginia.