Adjusting to the weekend's new realities.
- - - 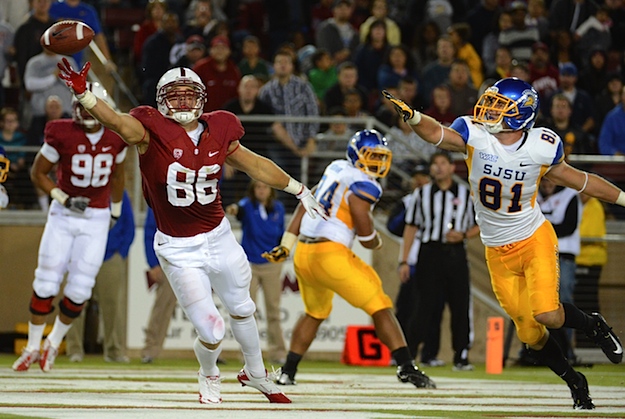 • When he was named Stanford's starting quarterback last month, Josh Nunes immediately took it upon himself to remind reporters that he is not Andrew Luck, he does not expect to be Andrew Luck and he will not try to be Andrew Luck. This is probably what his coaches, family and friends have been telling him since at least spring practice, probably longer: "You are not Andrew Luck." Based on initial returns in Saturday's too-close-for-comfort, 20-17 escape against San Jose State, they were right: Nunes is not Andrew Luck, by a long shot, and by the end of the year coach David Shaw may have the gray hairs to prove it. (Uh, metaphorically speaking, of course.)

To be fair, it was only Nunes' first turn as a starter on the college stage, and he was working with a largely re-cast ensemble at receiver and on the offensive line, where Stanford lost three other All-Americans – David DeCastro, Jonathan Martin and Coby Fleener – who subsequently went in the first 50 picks of April's draft. Some adjustment is to be expected. But Nunes is not a fresh-faced teenager (he's a fourth-year junior), and the Cardinal were not facing a steep learning curve: San Jose State has one winning season in the last ten, and is coming a year in which it ranked 93rd nationally in total defense and 86th in scoring; last year, Stanford trounced the Spartans on opening day, 57-3, and SJSU went to yield at least 30 points to the likes of Colorado State, Louisiana Tech, Idaho and Utah State. Given the same second-rate, ostensibly overmatched WAC also-ran to toy with, Stanford's point total (20) and total yardage (286) Saturday were its worst since the 2009 Sun Bowl, a game Luck missed with an injury. In Luck's 38 career starts, the Cardinal exceeded both of those numbers 38 times. 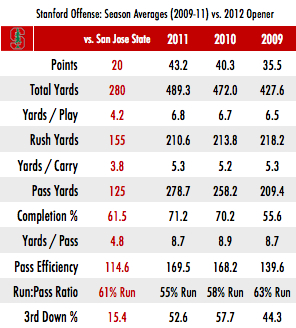 Considering the the competition and the expectations, that's not an especially high bar, especially given that the running game and defense were more or less as expected. (Tailback Stepfan Taylor had a workmanlike 116 yards on 26 carries, a solid effort given the lack of air support.) Stanford also had zero turnovers to San Jose State's two, which may have been the difference in an otherwise dead even game in the box score. But two other numbers stand out: 1. Stanford was a dreadful 2-of-13 on third down conversions (15.4 percent), a category in which it led the nation in 2010 and finished third in 2011; and 2. In stark contrast to Luck's big-play prowess off the play-action game, Nunes failed to complete a pass that gained more than 14 yards.

Numbers like that are never entirely on the quarterback, although it might be better if they were: At least then, the solution may be as simple as replacing Nunes with the guy who he beat out in the preseason, Brett Nottingham. (For the record, there is no indication of any plan to bench Nunes or rotate him. The guy is 1-0 as a starter.) The more pieces are missing, the more work there is to be done before USC comes to town on Sept. 15 to kick off the conference slate. After that, there are trips to Washington, Notre Dame and Cal in October, and then to Oregon and UCLA to close out the season. Even with the defense pulling its weight, it's hard to imagine Stanford winning any of those games with the paltry production from the offense against probably the easiest win on the schedule. Check back in two weeks.

• Likwise, Oklahoma was well aware of the potential problems that could follow from the loss of heavy preseason attrition on the offensive line, but they certainly didn't expect to be dealing with them at UTEP, of all places, where quarterback Landry Jones was under such relentless pressure Saturday night that even the local press felt compelled to come to his defense after the close call. The Miners only sacked Jones three times (watching it, it seemed like many more) but consistently hassled him and forced him to throw the ball away as the OU line attempted to stave off a complete meltdown. They finally did in the fourth quarter, scoring 17 unanswered points to pull away, but if UTEP can get pressure on Jones, Texas and the rest of the Big 12 are already licking their chops.

• Nebraska quarterback Taylor Martinez's offseason talk about improving his accuracy as a passer wasn't just talk, at least not as far as Saturday's opener against Southern Miss was concerned: In stark contrast to his run-first reputation, Martinez lit the Golden Eagles up for career highs in yards (349), touchdowns (5) and efficiency (211.2) when attempting at least ten passes. In fact, he attempted 34, just shy of his career high, completing 76 percent; as a runner, he accounted for zero yards on five carries. If he's even, say, two-thirds as good the rest of the season, Nebraska's offense suddenly boasts a dimension it hasn't even pretended to possess over the last two years.

• Again, massive attrition from the head coach on down didn't stop Houston from opening the season as the overwhelming favorite to repeat atop Conference USA's West Division, which may be one reason first-year coach Tony Levine elected to send his offensive coordinator packing after a single game: A 30-13 loss to Texas State, a 34-point underdog making its debut as a full-fledged FBS program. The Cougars' ineptitude resulted in their worst game in terms of both yards (326) and points (13) since November 2007, and their permanent ceding of the title of conference frontrunner.