Morning Bell: A specter is haunting USC – the specter of Joe McKnight

Share All sharing options for: Morning Bell: A specter is haunting USC – the specter of Joe McKnight 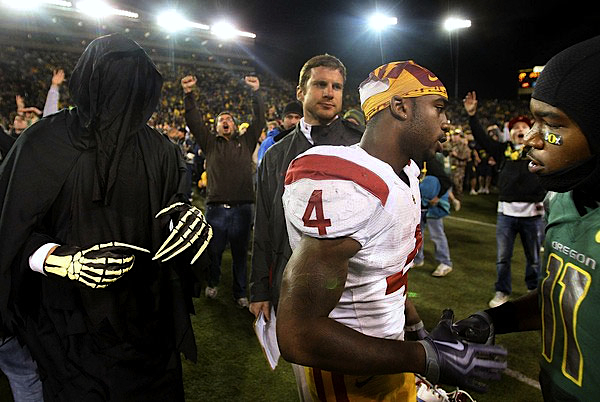 • Just when you thought you were out... Scott Schenter, a former Los Angeles County tax appraiser ensnared in an ongoing corruption scandal, now claims he supplied "improper benefits" to two ex-USC athletes circa 2008-09, including running back Joe McKnight, who allegedly benefited from use of a car and an airline ticket.

Schenter's name will be familiar to Trojan fans as the subject of a 2009 investigation involving an SUV that McKnight – then a sophomore with two years of eligibility remaining – was seen driving on campus. Schenter vehemently denied the allegations at the time, and a subsequent investigation by the school cleared McKnight with the NCAA; according to the Los Angeles Times, however, e-mails uncovered in the criminal probe against Schenter appear to verify the charge that a Chevrolet Monte Carlo owned by Schenter was in McKnight's possession in 2009, and that Schenter paid for a $625 flight from L.A. to New Orleans (McKnight's hometown) for passenger "Joe McKnight" in May 2008. Both are fairly obvious violations of NCAA rules.

The much bigger problem: USC is already on probation for violation of the same rules in the Reggie Bush/O.J. Mayo Affair, which opens the entire athletic department up to another crippling hit if the NCAA is so inclined. AD Pat Haden quickly responded to the Times story Saturday with a statement that a) Promised to "thoroughly investigate" the allegations and "take any and all necessary actions," and b) Reminded everyone that the same charges were investigated three years ago and came to nothing, so chill out. 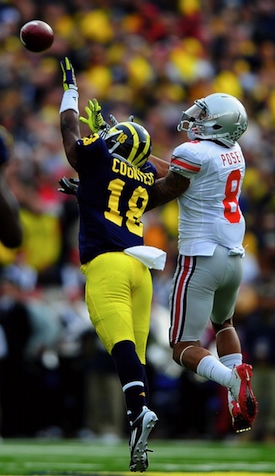 • Countess counted out. Mum's the word from the team, but reliable sources tell MGoBlog that starting Michigan cornerback Blake Countess is done for the season with torn ligaments in his knee, leaving the Wolverines painfully thin at corner opposite senior J.T. Floyd. (UPDATE: Michigan has confirmed the injury.) Countess went down in the first quarter of Saturday's loss to Alabama, and will likely be able to preserve an extra year of eligibility by claiming a medical hardship. [MGoBlog, Detroit Free Press]

On the other side, three starters on Alabama's defense – safety Robert Lester, defensive tackle Jesse Williams and linebacker Trey DePriest – left the game with injuries that kept them out for the rest of the night, but all three appear to be (relatively) minor. [al.com]

• Yeah, his shoulder's goin' click-clack. Steve Spurrier told reporters Sunday that South Carolina quarterback Connor Shaw "has trouble lifting his right arm right now" and is on a "wait and see" basis for Saturday's date with East Carolina. Last week, Shaw missed large chunks of the Gamecocks' 17-13 win over Vanderbilt and was visibly limited when he did play by what was later diagnosed as a "deep bone bruise" suffered in the first quarter. "It's just painful for him," Spurrier said. "He won't play if he's not healthy." [Associated Press]

• Curb your enthusiasm. True, the post-RG3 Baylor Bears looked alarmingly similar Sunday night to the outfit that obliterated every school record in 2011 on the arm of the Heisman Trophy winner/program messiah, dropping a flurry of big plays on SMU en route to a 59-24 rout. And true, quarterback Nick Florence put up a legitimately Griffin-worthy stat line, connecting with seven different receivers for 341 yards and four touchdowns – in other words, roughly in line with about half the quarterbacks who faced SMU's defense last year. Come back in, say, six weeks, after the Bears have faced West Virginia, TCU and Texas, and we can reassess. [Baylor 59, SMU 24]

Quickly… The ankle injury that sidelined Penn State cornerback Stephon Morris against Ohio doesn't look serious, but the jury is still out on the ankle injury that sidelined tailback Bill Belton. … Gene Chizik is not happy with Auburn's safeties. … A Missouri lineman describes Georgia's offense as "old man football." … A Notre Dame staffer fainted on the plane ride home from Ireland. … Don't blame Landry Jones for Oklahoma's near-meltdown at UTEP. … Oklahoma State played 19 walk-ons in its 84-0 rout over Savannah State, and still had trouble throwing on the brakes. … And did anyone outside of Miami notice that hyped freshman tailback Duke Johnson had a monster debut in the Hurricanes' win at Boston College? Did anyone in Miami notice?