West Virginia 70, Baylor 63
- - -
1. I don't want to start out by throwing out a lot of numbers that you can look up yourself, so I'll leave the summary to a first-hand observer:

I might need more gun powder for this game

That was in the first half. As it turns out, that much ammunition in a public setting is illegal under federal law.

2. OK, the pilot has turned on the "Fasten Seat Belt" sign. Please make sure your seats are in the upright position. 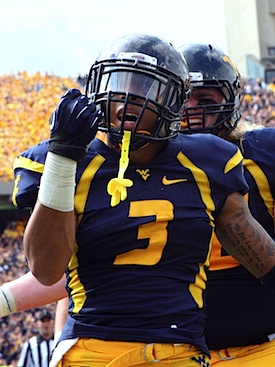 Eighteen of the game's 19 scoring drives covered at least 60 yards; sixteen took less than three minutes. Combined, the offenses were 23-of-31 on third down. Six different players finished with at least 100 yards receiving, including one player on each side – Baylor's Terrance Williams and West Virginia's Stedman Bailey – who accounted for more than 300 yards apiece, both school records. West Virginia's Tavon Austin set a school record for receptions (14) in this game, racked up 287 all-purpose yards and scored two touchdowns, and was basically a footnote.

So it goes without saying that the offenses were trading jump shots here. Then lay-ups. Baylor's defense is a figment of the imagination. But Geno Smith put the ball in the air 51 times, and had more touchdown passes (8) than incompletions (6). Outside of video games, even figments usually fare better.

3. Before today, I thought Baylor's defense precluded the Bears from top-25 consideration for reasons stemming from its above-stated existence only on alternate planes of reality. But the offense's big numbers coming in had come at the expense of SMU, Sam Houston State and Louisiana-Monroe, and today West Virginia's defense looked alarmingly like the ones from SMU, Sam Houston State and Louisiana-Monroe. (Statistically speaking, it was worse than all three.) For the record, WVU's next six games are against Texas (in Austin), Texas Tech (in Lubbock), Kansas State, TCU, Oklahoma State (in Stillwater) and Oklahoma, every single one of which is capable of matching Baylor point for point. With the possible exception of Texas Tech, though, I'm pretty sure none of them are going to give up seventy.

4. This had no impact on the outcome of the game (although it could have), but watching live it honestly did not occur to me that Nick Florence might not have been across the line of scrimmage when he let the ball go on the final play of the first half: 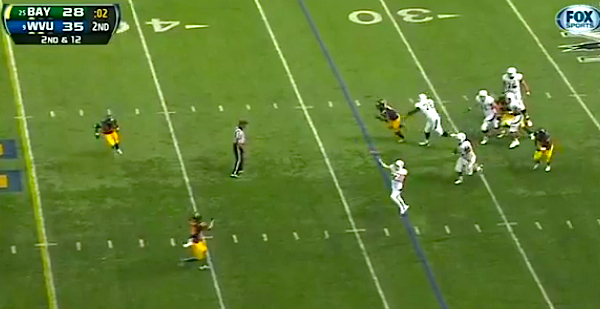 On the other end of that was Lanear Sampson, who outran a couple Mountaineers for a 67-yard touchdown that tied the game at 35 at the half. Initial call on the field was a touchdown; replay upheld it. The replay is closer than it looked live, and West Virginia's secondary deserves multiple demerits for a) Leaving Sampson wide, wide open on the last play of the half, when preventing a touchdown is the only priority, and b) Failing to get him on the ground – actually going for the strip! – when a tackle would have ended the half with no harm. But I still think Florence was across the line.

Well, at least he's going to keep getting plenty of practice.