On the day's most pivotal players, personalities, match-ups and schemes.

• Denicos Allen, LB, Michigan State.
If Ohio State's attack begins and ends with quarterback Braxton Miller, the Spartan counterpunch begins with Allen, who was at the front of the assault that stormed Columbus and strangled the Buckeye offense in its crib in 2011. Then, Michigan State racked up nine sacks (two by Allen), 13 tackles for loss (three by Allen) and held Ohio State scoreless for all but the final ten seconds of a 10-7 slugfest that confirmed MSU's defense as the best in the Big Ten. Miller, making his first Big Ten start as a true freshman, was 5-of-10 passing with an interception and a long run of three yards.

Now, Miller has grown into the most potent offensive weapon in the conference, and will certainly not be splitting time with the likes of Joe Bauserman today in East Lansing. (Through four games, Miller is accounting for about 70 percent of Ohio State's total offense, 25 percent as a rusher, not including the share that exploits the defense's efforts to prevent him from breaking one.) But he has not been asked to win a game with arm, on the road, against the top-ranked defense in the Big Ten in every significant category. Allen's ability to contain Miller as a runner will have a lot to do with how often he's able to go after him as a blitzer. The more often Miller is forced to throw on Michigan State's terms – i.e. second and third-and-long – the less dangerous he'll be in any capacity. 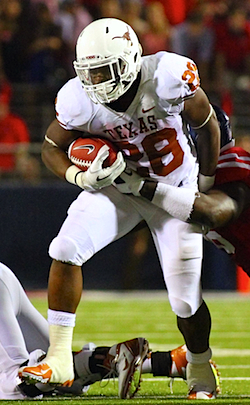 • Malcolm Brown, RB, Texas
Amid much cooing over the emergence of sophomore quarterback David Ash, Brown has quietly looked every bit the blue-chip bellwether his recruiting rankings envisioned, despite splitting carries with fellow sophomore Joe Bergeron and (to a lesser extent) freshman Johnathan Gray. Last year against Oklahoma State, Brown ripped off 135 yards and two touchdowns on 7.1 yards per carry, and Texas nearly doubled up the fast-paced Cowboys in time of possession. That's still the best game of his career, and serves as a template for tonight's tilt in Stillwater, where the Longhorns still have an interest in controlling the ball, slowing the pace and keeping Ash out of bad situations on the road.

• Kenny Bell, WR, Nebraska
Taylor Martinez has had a half-full/half-empty sort of September as a passer, looking like Johnny Unitas against the likes of Southern Miss, Arkansas State and Idaho State and Johnny Rotten in Nebraska's only road trip, a 36-30 loss at UCLA. (We already know the perspective of Wisconsin's defense.) When he has been on, Martinez's best target has been Bell, who had six catches for 108 yards against the Bruins and is currently averaging nearly 25 yards per catch for the season. If Martinez avoids the killer mistakes that plagued him last year in Madison, he may not have to be accurate very often to make the Badgers eat their words.

• Malcolm Mitchell, CB, Georgia.
Had he stayed on the other side of the ball, Mitchell might rank as the best receiver on the field today for Tennessee's visit to Athens, which is saying something. As it stands, Georgia is doing just fine at wideout, thank you, and Mitchell's priority will be thwarting the Vols' first-rate deep threats, Justin Hunter and Cordarrelle Patterson, who already have a reputation for leaving future pros in flames. Besides the implications in the SEC standings, there might be a lot of money at stake here, too.

• Scott Crichton, DE, Oregon State.
In 2011, Oregon State finished dead last in the Pac-12 against the run, yielding nearly 197 rushing yards per game. After two games against Wisconsin and UCLA, the 2012 Beavers lead the nation, the driving force behind OSU's 2-0 start. Crichton led the charge last week in the Rose Bowl, finishing with six solo tackles, three tackles for loss, two sacks, and a pass broken up for good measure.

Both the Badgers and Bruins, however, had the courtesy to run right at Oregon State in conventional power sets, a luxury the Beavers won't have against Arizona's speed-based, misdirection-heavy zone read scheme, designed specifically to put pressure on the ends.