Either we have to start believing that CenturyLink Field serves as some combination of yellow sun and/or kryptonite, or our initial, preseason uncertainty toward the Cardinal is much closer to the reality than the top-10 hoopla of the past two weeks.

Share All sharing options for: Washington blindsides suddenly stagnant Stanford back to reality

Washington 17, Stanford 13
- - -
1. The last time Washington had a national television spotlight more or less to itself, it was on the wrong end of an atomic explosion by Baylor's offense in the Alamo Bowl last December, the fallout from which quickly claimed the Huskies' entire defensive coaching staff. Hell, the last time we saw Washington against an FBS opponent, period, it was getting ground into a fine paste in a 41-3 beatdown at LSU just three weeks ago. After finishing next-to-last in the Pac-12 last year in total and scoring defense, the Huskies came into tonight holding fast at next-to-last against the run.

So it's only logical, I guess, that they would proceed to make the most methodical, punishing ground game in the Pac-12 – the same attack last seen manhandling USC in the most relevant and non-fluky upset of the early season – look like it showed up for a tea party. Stanford's total on the ground tonight, 65 yards, is its worst since Jim Harbaugh's first season as head coach in 2007; ditto the output in terms of total yards (235), yards per carry (2.3) and of course, points (13). Only six of those points were generated by the offense, which did not come close to the end zone.

First-year Washington defensive coordinator Justin Wilcox, how does that make you feel?

Either we have to start believing that CenturyLink Field serves as some combination of yellow sun and/or kryptonite, depending on the sideline, or our initial, preseason uncertainty toward the Cardinal is much closer to the reality than the top-10 hoopla of the past two weeks.

2. The first thing Josh Nunes said when he was tabbed as Stanford's starting quarterback in August was "I am not Andrew Luck," and everybody thought, "well, no shit." But after the extended honeymoon that came with the Cardinal's upset over USC, this is the week that we get to see just how decidedly not Andrew Luck he really is. 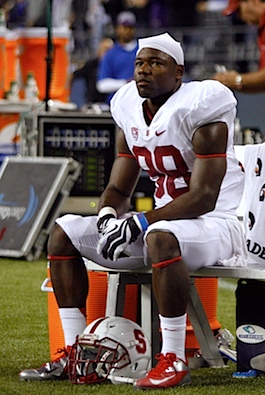 On the road for the first time, Nunes completed fewer than half of his passes (17 of 36) for an anemic 4.2 yards per attempt and zero touchdowns, getting hit with repeated delay-of-game penalties in the process. In the first half, he connected with tight end Zach Ertz on a pair of downfield completions (covering 35 and 24 yards, respectively) that set up a pair of field goals; in the second half, Stanford's longest gains were completions of 15 and 14 yards… also to Ertz. The biggest play by someone other than Ertz after halftime was good for seven yards.

Obviously, this is a problem. In his defense, Nunes didn't do dumb things with the ball (his lone interception came on the Cardinal's last play of the game), he had no ground support from the usually reliable running game and the ostensible deep threats on the outside were nonexistent. When he did manage to find his best wide out, Ty Montgomery (right), streaking behind the coverage on multiple occasions in the second half, the result was multiple drops that cost Stanford points each time. (Montgomery's last and most egregious display of butterfingers, on the Cardinal's final drive, almost certainly would have gone for the go-ahead/game-winning touchdown, or at least set it up near the goal line.) This is not a new problem – just about every Stanford preview cited the wide receivers as the biggest question mark on the team, even more so than quarterback – but it has been effectively covered up by the success of the running game, which facilitates play-action to the first-rate tight ends. Once out-muscling the defense ceases to be an option, there is still no one on hand capable of outrunning them.

3. The same equation holds on defense. Stanford's front seven was characteristically dominant over the first three quarters, very much in the vein of the punishing, physical win over USC, but its lack of athleticism on the back end was painfully obvious on the Huskies' late touchdowns – a 61-yard sprint up the gut by Bishop Sankey, followed by a juggling, 35-yard catch-and-run by Kasen Williams – neither of which would have been possible without a badly missed angle or tackle by the Cardinal secondary in the open field. The pass rush generally helps keep the coverage out of trouble, and certainly harassed Washington quarterback Keith Price tonight. But the speed positions at receiver and defensive back are clearly the areas where recruiting and development remain well behind the elite curve.

Murphy had seven tackles and one of the Cardinal's seven tackles for loss, reprising his impressive stat line against USC (six tackles, two for loss, one forced fumble). But here's guessing scouts are going to be less interested in his numbers than in his agility to come up with the pick and his motorin' speed to the end zone with a wide receiver flailing in vain on his heels.

5. Before tonight, Stanford had only lost twice in its last 29 regular season games, both of those losses coming at the hands of Oregon. That makes this the fist non-bowl, non-Duck defeat for the Cardinal since a 34-28 decision against Cal in November 2009, when most of the current roster was still in high school. If they fail to crawl back into the top ten this year or next, tonight may go down as the beginning of the end of an era. Check again later.