Oklahoma State and the art of give and take

To whom much is given, much is expected. But going into Saturday's crucial Big 12 opener with Texas, Oklahoma State's defense hasn't given the prolific offense nearly the turnover help it received in 2011. Was the Pokes' takeaway binge a fluke?

Share All sharing options for: Oklahoma State and the art of give and take

Take every word written about Oklahoma State over the offseason, add them all up, and my guess is something like 97 percent would amount to hand-wringing over the departure of headliners Brandon Weeden and Justin Blackmon for the NFL in the wake of the best season in school history. (The other three percent would consist of boilerplate lists of the returning starters on defense, interviews with T. Boone Pickens, increasingly stale references to Mike Gundy's "I'm a man!" speech and emotional interviews with victims of Post-Traumatic Stress Disorder following an encounter with Pistol Pete.) How do you go about replacing the twin engines of the most prolific offense in college football in one fell swoop? With a true freshman?

Nearly a month into the season, that already seems like the wrong question. Hell, it's borderline naive: After three games, the Cowboys are back in their familiar perch atop the national rankings in both total and scoring and offense, easily surpassing last year's red-hot pace even if you ignore the opening day play-date with Savannah State. At Arizona two weeks ago, OSU racked up 636 yards on a staggering 92 plays, both numbers the 2011 Cowboys topped only once; a week later, the school record for total offense fell in a 65-point, 742-yard massacre over Louisiana-Lafayette, virtually all of which came with the starting quarterback on the sideline. Even if Big 12 defenses manage to hold them to just two-thirds of that, the revamped offense is on pace to ring up numbers perfectly consistent with its chart-topping output over the last two years. And Big 12 defenses, of course, are still Big 12 defenses. 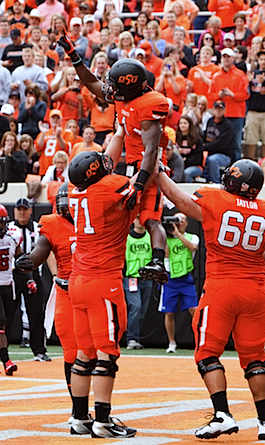 With that in mind, make what you will of a a point spread that makes Oklahoma State a slight underdog against Texas Saturday on its own field, where OSU has won eight straight dating back to last year. At this point, the Ghost of Cowboys Past isn't standing in judgment of the offense's ability to sustain nuclear statistics. Instead, it's pointing a bony finger at the turnover margin, and finding the column woefully wanting.

As much credit as the offense deserves for last year's breakthrough, and as prolific as Weeden, Blackmon and Co. were on a weekly basis, the one stat that best defined OSU's run may have actually been turnover margin. Altogether, OSU led the nation on the giveaway/takeaway ledger for the season, forcing at least three takeaways in 10 of 13 games; within the conference, Texas A&M, Missouri, Baylor and Oklahoma all coughed it up at least four times apiece in defeat. The final yield, 44, turned out to be the most turnovers created by any I-A/FBS defense since 2003.

It was no coincidence that the only times Oklahoma State finished in the red in the final dozen games also happened to be a) The only close call in Stillwater, a 52-45 escape against Kansas State in which OSU was –2 for the night; and b) The only loss, a stunning, 37-31 ambush at Iowa State, where OSU gave the ball away four times in regulation and sealed its fate by serving up number five in overtime. To a great extent, the Cowboys' national championship ambitions were brought to life by turnovers, and ultimately died by them.

From that perspective, the shootout in Arizona three weeks ago was about as ominous as September omens come: In its first road game, the revamped offense gave the ball away four times – three of them from the arm of freshman quarterback Wes Lunt, leading directly or indirectly to 17 points for the Wildcats – and this time got nothing in return from the defense. Zero fumbles, zero interceptions, zero offensive possessions beginning in Arizona territory. The Cowboys outgained the Wildcats by 135 yards of total offense and scored on six different drives covering at least 60 yards apiece, and lost in a blowout.

Two footnotes from that game may be relevant to Saturday's make-or-break visit from Texas. First: The originator of three of the four giveaways in Tucson, Wes Lunt, likely will not play against the Longhorns due to the knee injury he suffered against UL-Lafayette; in that case, the keys will fall to redshirt freshman J.W. Walsh, who was the favorite to win the starting job before Lunt made his move in spring practice, and who subsequently lit up the Ragin' Cajuns for four touchdown passes without a turnover in Lunt's place. Second: Defensive coordinator Bill Young, architect of the aggressive philosophy that produced last year's turnover binge, didn't make the trip to Arizona while recovering from a medical procedure. But he will be making the calls against the Longhorns.

Through three games, UT quarterback David Ash has betrayed no hint of the turnover plagued freshman who gave the ball away three times last year in a 38-26 Oklahoma State win in Austin; to the contrary, with his 324-yard, 5-touchdown outburst at Ole Miss, he's playing his way yet to throw an interception.

As far as throwing against Oklahoma State is concerned, protecting the ball is a more important measure than yardage, if only because big yardage in this conference is basically a given at the end of the day. Whoever starts opposite Ash for the Cowboys, be it Lunt or Walsh, is going to put up big yardage, too. The question is, which side is able to convert that production into actual points, and which side is left with a lot of empty yardage, signifying nothing? An early foothold toward the Big 12 championship depends on the answer.