SMQ Abroad: Another year, another chance for Taylor Martinez to tame the skeptics

Share All sharing options for: SMQ Abroad: Another year, another chance for Taylor Martinez to tame the skeptics 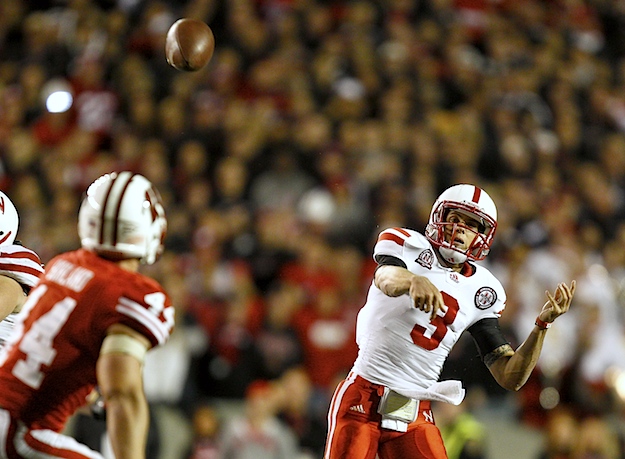 Wisconsin lineman: Taylor Martinez 'still looks like he's skipping rocks' as a passer.
Over at CBS, I check up on Taylor Martinez's progress as a passer since last year's debacle in Madison, after Badger defensive end David Gilbert vowed to reporters that Martinez "is not going to beat us with his arm":

But then, yeah, there's that trip to UCLA. Martinez was not quite brutal in the Rose Bowl – as a runner, in fact, he was fairly brilliant, producing the longest run of his career from 92 yards out – but he was not exactly efficient, either: Nebraska converted just one of eleven third-down attempts and managed just six points on nine offensive possessions in the second half. With the game still within reach in the fourth quarter, Martinez served up an easy, floating interception that set up a short field for the Bruins' clinching touchdown in a 36-30 loss.

That remains his only pick of the season, but under the circumstances – on the road, in the clutch, against the only comparably talented defense on the non-conference schedule – it may still say more about where Martinez is as a passer than any of his nine touchdowns against the lower classes.