Marcus Lattimore is full speed ahead, but how much of South Carolina's SEC fate is he still carrying?

The Gamecocks' All-American workhorse looks as close to 100 percent as they could have hoped. Now, South Carolina has to decide if its SEC and BCS ambitions still require him to assume 100 percent of his old workload.

Share All sharing options for: Marcus Lattimore is full speed ahead, but how much of South Carolina's SEC fate is he still carrying? 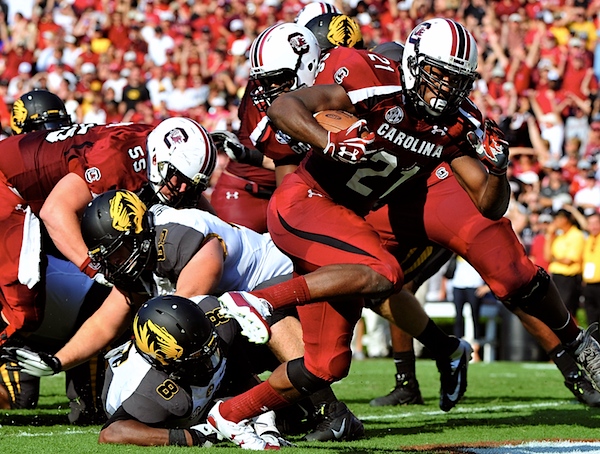 Four weeks in, the most pressing question about Marcus Lattimore's surgically reconstructed knee has been answered pretty emphatically: Running without a brace Saturday for the first time this year, South Carolina's resident workhorse churned out 148 yards on 28 touches – almost half of those yards coming as a receiver – in a 31-3 rout over Missouri, again betraying virtually no sign of rust while giving every indication of still being able to hold up under his former Herculean workload. Which may not have come with a surprise, but should come as a tremendous relief.

Now that that's out of the way, we've arrived at the second question: Given the balance they flashed in dispatching Mizzou, do the Gamecocks still need Marcus Lattimore to resume his former Herculean workload to take the SEC East?

The past two years, that answer has always been "yes," practically from the moment he arrived on campus in 2010. In his first SEC game as a true freshman, Lattimore ran 37 times for 182 yards, scored twice, and broke 29 tackles in a USC win over Georgia. Against Alabama, he came as close as any back in the last five years to cracking the century mark against the Tide with 93 yards on 23 carries, and also caught a touchdown pass in arguably the biggest win in Gamecock history. With the SEC East crown on the line at Florida, where South Carolina had never won, he ran 40 times for 212 yards and three scores in a Gamecock rout that sent them on to their first SEC Championship Game. For the year, he personally accounted for a little over a third (33.9 percent) of Carolina's total offense in the 12 games he played in, touching the ball on 34.8 percent of the offensive snaps.

Before his injury in 2011, those numbers were both on the rise. Against Georgia, Lattimore churned out 174 yards on 27 carries in a 45-42 win, 94 of them on two late drives with Carolina protecting a narrow fourth quarter lead. Against Navy, he accounted for 272 yards and all three Gamecock touchdowns in a come-from-behind, 24-21 win, at one point touching the ball on 11 of 15 snaps on what turned out to be the game-winning touchdown drive. Against Vanderbilt, he accounted for 150 yards and both offensive touchdowns in a 21-3 win, including a career-long, 52-yard catch-and-run. 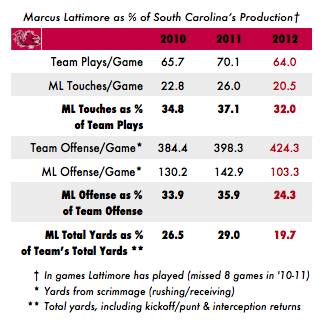 When he was hurt, Lattimore was averaging a hair shy of 143 yards per game, or nearly 36 percent of Carolina's entire production, easily the largest share by any individual player in the SEC. In the first three games following the injury, the Gamecocks combined for just 31 points in defensively driven wins over Tennessee and Florida and barely cracked 200 yards of total offense in a loss to Arkansas that cost them the division.

In retrospect, though, the win over Florida last November is beginning to look like the moment that the light went on for quarterback Connor Shaw. In that game, while still struggling as a passer, he successfully compensated with 93 yards (not including sack yardage) and two touchdowns rushing. Two weeks later, Shaw ran for 129 and another score against Clemson, but more importantly, his arm caught up: With three touchdown passes against the Tigers and two more in the Capital One Bowl win over Nebraska, he finished the season with a touchdown:interception ratio of 8-to-1 over the last three games, and registered a sky-high, 200-plus pass efficiency rating in all three.

Against Missouri on Saturday, his first healthy appearance of 2012, Shaw hit his last 20 passes – that's 20 consecutive completions in a conference game, if it didn't quite sink in, all of which you can see here – for 249 yards, two touchdowns and an efficiency rating of 226.3. (Just go ahead and put the 80-yard touchdown run negated by penalty out of your mind.) In the last five games he's started and finished, i.e. when not being rotated or benched due to injury, Shaw has averaged 271 total yards with 15 total touchdowns. On paper, no other quarterback in the SEC comes close.

The most immediate beneficiaries of that are the young receivers, junior Ace Sanders, and sophomore Bruce Ellington and Damiere Byrd, none of whom is about to replace Alshon Jeffery as an every-down, go-to target (Lattimore currently leads the team in receptions out of the backfield), but all of whom have delivered big plays of one variety or another this season. As a group, Sanders, Ellington, Byrd and sophomore tight end Rory Anderson are averaging 19 yards per catch; as a team, the Gameocks have already broken 24 plays covering at least 20 yards, second in the conference only to Georgia, including Byrd's 94-yard bomb against UAB. Sanders only caught one pass against Missouri, but still left the field as one of the stars of the game in multiple phases:

The indirect beneficiary, of course, is Lattimore, whose workload and overall share of the offense's production is significantly down so far, even as the offense's production as a whole is significantly up. At this stage in the season, some of that is purely circumstantial: He didn't need to touch the ball 25 times for the offense to drop a huge number on East Carolina or UAB, and he didn't. Meanwhile, he's still combined for 54 touches in the two SEC games. But that's a sea in itself from the first half of 2011, when he had 26 touches against East Carolina, 41 against Navy and 26 against Kentucky, mainly because (at least in the former cases, both tight games that were still competitive in the fourth quarter) it was necessary for want of a viable downfield passing game. And even more importantly than being judicious about how often Lattimore touches the ball is knowing there are other productive options available when he doesn't.

At the very least, more diversity means less wear and tear on those occasions that Carolina really does its workhorse to handle 30 carries, several of which are imminent with Georgia, LSU, Florida and Tennessee looming in consecutive weeks in October. Even if Lattimore hits that stretch in full Hulk mode, though, the supporting cast will have every bit as much to do with whether they survive with larger SEC and BCS ambitions intact.