4-0, you say? The new Notre Dame bandwagon should be launching right about... now

The true believers at Sports Illustrated welcome readers to the official launch of Irish Hype 2012.

Share All sharing options for: 4-0, you say? The new Notre Dame bandwagon should be launching right about... now

Notre Dame is 4-0 for the first time since 2002 and ranked in the top ten of both major polls after back-to-back wins over Michigan State and Michigan, impressively old-school slugfests in which the Fighting Irish defense yielded a grand total of nine points and zero touchdowns. But relax, Irish fans: Anyone who takes a quick glimpse at the offensive numbers or the depth chart at quarterback or the rest of a brutal schedule knows there is way, way too much football left to start anointing this team with those old "Waking Up the Echoes" laurel leaves before the end of September.

Anyway, the hype is not officially official until a big, national outlet with a vastly larger reach than your everyday college football audience – like, I don't know, say, Sports Illustrated – puts it out there with some cheesy line about "restoring the shine to the Golden Dome" or some such hokum. And surely by now they've learned their lesson about getting too far ahead... of... um... 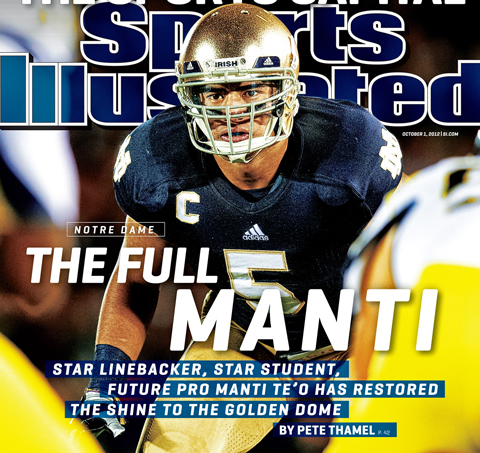 OK then. Well, it's nice to see the old bandwagon still running strong after all these years.

If you're keeping count, Te'o is the 29th different Notre Dame player or coach to appear on an SI cover since eventual Heisman Trophy winner Paul Hornung did the honors in 1956, following most recently on the heels of wide receiver Maurice Stovall, subject of an infamous 2002 cover touting the Irish's "RETURN TO GLORY" following a win over Michigan State to move to 4-0 under first-year head coach Tyrone Willingham. (Additional copy on the Stovall coer: "WHAT A DIFFERENCE A COACH MAKES.") That team went on to start 8-0 and rise as high as No. 4 in the polls before losing to Boston College in November, and ended the season with back-to-back blowouts at the hands of legitimately resurgent USC and Philip Rivers-led N.C. State in the Gator Bowl; Willingham's teams went 11-12 over the next two years, and he was summarily excommunicated to Siberia Washington.

Incredibly, despite spending 19 weeks in the top ten and landing in a pair of BCS bowls in 2005-06, the Irish didn't land a single cover during the four-year reign of Charlie Weis. Probably because they never made it to 4-0.

But this team has. And it may only be September, but whenever the opportunity arises, Notre Dame hype is always gold.