Weekly notes from the undercard.

Share All sharing options for: Mid-Major Monday: Got those Boise State rebuilding blues 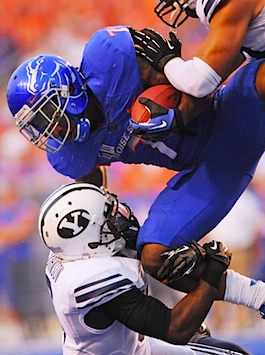 Under the circumstances, it was unrealistic to imagine Boise State tearing out of the chute like the gang of disciplined, bucktoothed assassins that politely carved up everyone in its path over the last four years, mainly because it's not: Besides the winningest quarterback in college football history, the Broncos are also replacing 16 other senior starters, including last year's leading rusher, leading receiver, four starting offensive linemen, nine of the top ten tacklers on defense and all eight players selected to the postseason All-Mountain West team. We knew that. So the revamped lineup failed to score an offensive touchdown on opening night at Michigan State? What did you expect? No shame in keeping it close against that kind of defense the first time out.

Even within that context, though, last Thursday's 7-6 slugfest against BYU looked less like growing pains and more like an offense that's just bad at offense. Again, as in East Lansing, the Broncos failed to reach the end zone on offense despite the benefit of five turnovers, relying (again) on an unlikely interception return by a defensive lineman to supply its only points of the game. It was all the uglier for the blue turf: In terms of yards (261) and points (7), it was Boise's worst output in any home game since moving up to the I-A level back in 1996. High-scoring blowouts were the routine in Bronco Stadium a decade before Kellen Moore took a snap there; through three games, the 2012 Broncos rank 107th nationally and next-to-last in the Mountain West at 19.7 points per game. Take away two defensive touchdowns, and the average drops to 15 points. That number has not been below 30 for an entire season since 1998.

Of course, some of that has to do with the solidly above-average defenses of Michigan State and BYU, though it may be a while before we can really gauge how much. (Ditto the transition to an entirely new set of players.) It is safe to say right now that the only way we're going to see anything resembling the standard fireworks from the new quarterback, Joe Southwick, anytime soon is against some of the scrubbiest secondaries in the nation. In the Mountain West, there happen to be quite a few of those on tap. But that tired, dumb old line about what happens when the Broncos come up against a "real defense"? Until further notice, the answer is no longer in their favor.

• THE CRIB SHEET: Elsewhere in mid-majordom…
• Southern Miss has delivered a winning record in 18 consecutive seasons, the fourth-longest streak in the nation after Florida, Florida State and Virginia Tech, and every indication is that it's going to end there. USM was trounced Saturday by Western Kentucky, 42-17, dropping the Eagles to 0-3 for the first time in 36 years with Louisville, Boise State and Central Florida on tap over the next three weeks. Barring a minor miracle, Southern Miss will emerge from that stretch 0-6 and still grasping for anything to hang its hat on: So far, the Eagles have been outgunned by 188 yards and 21 points per game, and the gap is not getting any smaller.

• Mike Locksley lasted 26 games as New Mexico's head coach before he was fired last September, and won exactly two of them – one apiece in 2009 and 2010. Bob Davie has been New Mexico's coach for just four games, and has already matched that total: With Saturday's 27-14 win over New Mexico State, the Lobos are 2-2, the first time they've been at .500 at any point since October 2008. There are four more plausible wins over the rest of the schedule, against Texas State, UNLV, Wyoming and Colorado State. Split those, and that qualifies as a successful footbaw season.

• Texas-San Antonio is off to a 4-0 start in its first season as a full-fledged FBS program, but the Roadrunners have yet to beat another FBS team: Their victims to date are South Alabama, Texas A&M-Commerce, Georgia State and Northwestern Oklahoma State, owners of a combined record of 1-14. This Saturday offers the first chance to break through against a WAC rival, New Mexico State, which is going to be sooooo jealous it didn't think to adopt the nickname "Roadrunners."

From the sepia-toned ashes of defeat, the Cowboys arose Saturday to out-duel winless Idaho in an overtime shootout featuring six ties/lead changes in the second half. At the start of the fourth quarter, Wyoming trailed, 27-20, but rallied to take a 34-27 lead on a pair of touchdown passes by quarterback Brett Smith. From there, the Vandals embarked on a 14-play, 69-yard drive that ate up the final 3:30 of regulation, capped by an 8-yard, 4th-and-goal touchdown pass from Dominique Blackman to Mike Scott that evened the score as time expired. In overtime, Wyoming answered an Idaho field goal with a 25-yard strike from Smith to Jalen Claiborne on its first play, sealing the victory and bragging rights over huge swaths of uninhabited space.

For the game, Smith racked up 365 yards passing and five touchdown passes to five different receivers, most notably an 80-yard bomb to senior Chris McNeill in the first half. Blackman countered with four total touchdowns of his own for Idaho, but the Vandals also fumbled the ball away three times en route to 0-4.
- - -
Honorable Mention: San Jose State rallied from behind to beat San Diego State, 38-34, on a game-winning touchdown pass from David Fales to Chandler Jones with 50 seconds to play.

• MID-MAJOR PLAYER OF THE WEEK: Taylor McHargue, QB, Rice
McHargue – whose last name must be pronounced pirate-style, Mc-AAAAAAARRRRGGGH – amassed 467 yards of total offense and four touchdowns with zero turnovers in the Owls' 54-51, double overtime loss against Marshall, for which the Rice defense should be made to walk the plank. Thundering Herd fans probably feel the same way after watching McHargue rack up career highs for passing (314 yards, 3 TDs) and rushing (153 yards, 1 TD), his third 100-yard rushing game of the season before sacks.
- - -
Honorable Mention: Utah State running back Kerwynn Williams had 227 yards and two touchdowns in the Aggies' 31-19 win over Colorado State. … Arkansas State quarterback Ryan Aplin had three touchdown passes on just 13 attempts in the Red Wolves' 56-0 annihilation of Alcorn State, good for the best pass efficiency rating by any FBS passer this season. … And Nevada tailback Stefphon Jefferson racked up 246 total yards and seven – count 'em, seven – touchdowns in the Wolf Pack's 69-24 win at Hawaii.

• UPSET OF THE WEEK: Central Michigan 32, Iowa 31
Two weeks removed from a 41-7 beatdown at the hands of Michigan State, the Chippewas jumped out to a 23-14 halftime lead in Iowa City before wearing down under the relentless pounding of the Hawkeyes' sixth-string, walk-on running back, Mark Weisman, eventually yielding 17 consecutive points in the third and fourth quarters. Which is obviously nothing when you can always just score nine points in a span of 45 seconds:

My favorite part is the Hawkeye literally jumping out of the way of the onside kick, and also the CMU radio guy cackling like a chimp.

A SOMEWHAT ARBITRARY MID-MAJOR TOP 10.
1. Louisiana Tech (3-0). Vegas says the defending WAC champs' 52-24 romp over Illinois was an upset. I don't.
2. Ohio U. of Ohio (4-0). Bobcats have an opening day upset of Penn State in their cap and may be favored to win the rest of their games by double digits.
3. Boise State (2-1). By the end of last week's 7-6 win over BYU, once-prolific Broncos were beginning to look like they may never score again.
4. Nevada (3-1). Wolf Pack can score a ton, as usual, and get Boise State in Reno in December. Which may make them the odds-on favorites to win the Mountain West.
5. Louisiana-Monroe (1-2). The most exciting team in college football finishes the ostensible "bodybag" portion of its schedule with an overtime win at Akansas, an overtime loss at Auburn and a down-to-the-wire loss against Baylor. If that run is any indication, the Warhawks won't lose again.
6. Utah State (3-1). Aggies are only one missed field goal at Wisconsin from contending for No. 1 on this list.
7. Ball State (3-1). Cardinals have taken out Indiana and South Florida in consecutive weeks, and may be the only thing standing between Ohio and a perfect regular season.
8. Central Florida (3-1). I guess here has to be a Conference USA team somewhere on here, huh?
9. Western Kentucky (3-1). Back-to-back wins over Kentucky and Southern Miss have the Hilltoppers well on their way to another winning record.
10. San Jose State (3-1). Spartans put up a better fight at Stanford than USC two weeks later, and haven't lost since.
- - -
Honorable Mention: BYU, Central Michigan, Northern Illinois, Toledo, Tulsa.

• Next Week: Central Florida takes a crack at an SEC win vs. Missouri and UL-Monroe loses to Tulane, probably.