In this week's rankings: Offensive woes at Auburn cost LSU, Kansas State makes the leap, and reassessing the degree of difficulty in Alabama's biggest wins. 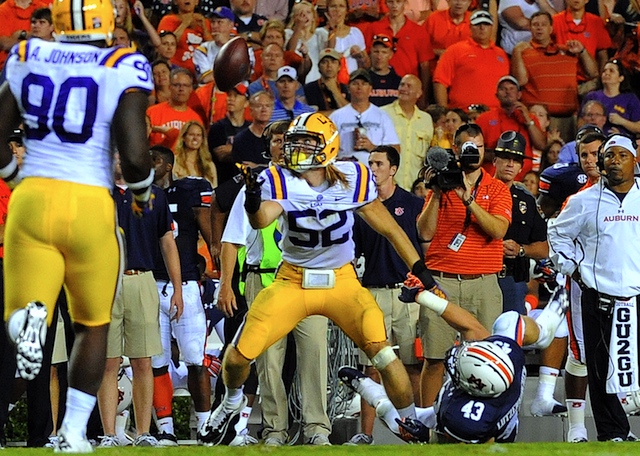 Now in its seventh year, the College Football BlogPoll is a weekly effort of dozens of college football-centric websites representing a wide array of schools under the oversight of SB Nation. As always, this is not a power poll.

I'm not about to predict LSU's imminent demise as a national contender, but if there has been a red flag this year among the current class of unbeatens, the Tigers' offensive effort in a 12-10 escape from Auburn must be it. Against a dozen opponents who were not Alabama in 2011, LSU averaged 41 points per game and scored at least 35 in eleven of the twelve; the narrowest margin of victory was 13 points, and more often than not exceeded thirty. Saturday, against an Auburn defense that came into the game ranked 13th in the SEC in total defense and 12th in scoring, the Tigers put up all of 10 points on offense and needed a safety to serve as the final margin of victory. Previously, the same defense was last seen yielding 28 points in back-to-back games against Mississippi State and Louisiana-Monroe.

OK: A win is a win, especially when it's an in-conference road win. And quarterback Zach Mettenberger was starting for both the first time outside of Baton Rouge and the first time against an SEC defense. And yes, the defense and special teams had almost as much to do with last year's scoring binge as the offense. But that's part of the problem: The two players most responsible for putting non-offensive points on the board last year, cornerbacks Morris Claiborne and Tyrann Mathieu, are both gone. If their cover skills can be replaced (a big if, against a decent quarterback), their knack for generating big, game-changing plays on turnovers and in the return game almost certainly cannot. The defense rules, but you can't start talking SEC and BCS championships if you can't generate more than 10 points against an uninspiring edition of Auburn.

So LSU drops this week until further notice, i.e. October, when they take on Florida, South Carolina and Texas A&M as very spicy appetizers ahead of the main course on Nov. 3. Full poll and other notes below the jump.

• This is what Nick Saban has been trying to tell you people. Not to suggest the Crimson Tide aren't the all-powerful takers of souls they're cracked up to be, but Alabama's two big, impressive wins to date – over Michigan and Arkansas – do not look nearly as impressive in the wake of the Wolverines' and Razorbacks' losses at the hands of Notre Dame and Rutgers, respectively. Remember how bad Alabama made Denard Robinson look in the opener? Notre Dame just made him look much, much worse. Meanwhile, outside of appearing borderline suicidal against Alabama with their starting quarterback stuck on the sideline, Arkansas' resumé now consists of a loss to a Sun Belt team, a loss to a Big East team and an interim head coach who appears to be slowly losing his mind. At best, the Razorbacks are in a dead heat with Ole Miss as the worst team in the division.

At least Alabama destroyed these pretenders in a fashion befitting pretenders. But after this weekend, I'm inclined to say Oregon (over Arizona), Florida State (over Clemson), Stanford (over USC) and Kansas State (over Oklahoma) all have a more impressive win at the moment than the Crimson Tide. Not enough to get any of them to No. 1, considering a) Alabama's margins of victory in multiple big games, and b) Its track record as the most consistently dominant program in the country over the last four years, but the margin is a little slimmer this week than last week.

• Bear Down, Hold Fast. Speaking of Oregon's win over Arizona: Despite their bewildering o-fer in Eugene, the Wildcats wound up in exactly the same spot this week as last week, 17th, which was not intentional but does reflect a bias in favor of their Week 2 upset over Oklahoma State. That win gives Arizona a stronger anchor in the teens than any of the weekend's other high-profile losers, who line up behind 'Zona accordingly – No. 18 is UCLA (win over Nebraska), No. 19 is Clemson (win over Auburn) and No. 20 is Oklahoma (Oklahoma logo on side of helmet). The mainstream polls both bounced the Wildcats with extreme prejudice in favor of teams that have feasted on cupcakes (Baylor) and worse, the team the Wildcats beat to enter the polls in the first place. (Two weeks after losing by double digits in Tucson, 3-1 Oklahoma State is 22nd in the Coaches' poll, while 3-1 Arizona is unranked.) Given the routine violence toward visitors in Autzen Stadium, I'd rather over-reward the big win than over-punish the loss.

• Three's Company. As for the SEC East logjam at the bottom of the top ten, I'll just say that the round robin between Florida, Georgia and South Carolina is shaping up as the most interesting development in that division in at least five years.

• How the other half lives. Like last week's poll, there are no mid-major outfits in this week's poll, or the very good reason that there basically are no obviously poll-worthy teams outside of the Big Six conferences/Notre Dame. The only remaining hope for busting a BCS game is the defending WAC champ, Louisiana Tech, which has already dispatched Houston and Illinois and still has upcoming dates against Virginia and Texas A&M before disappearing into the conference schedule. The only other unbeaten team* outside of the major leagues: 4-0 Ohio U. of Ohio in the MAC.

- - -
I know, technically first-year FBS member UT-San Antonio is also 4-0, but considering the Roadrunners' victims are South Alabama, Texas A&M-Commerce, Georgia State and Northwest Oklahoma State, I'll hold off on including them in this discussion.