The Seminoles' second half outburst against Clemson was exactly the display of old-school firepower FSU fans have been waiting to see unleashed for a decade. But at what point does the promise of future returns overcome the disappointment of past results? And nine other thoughts on Saturday's games, as seen from Sunday. 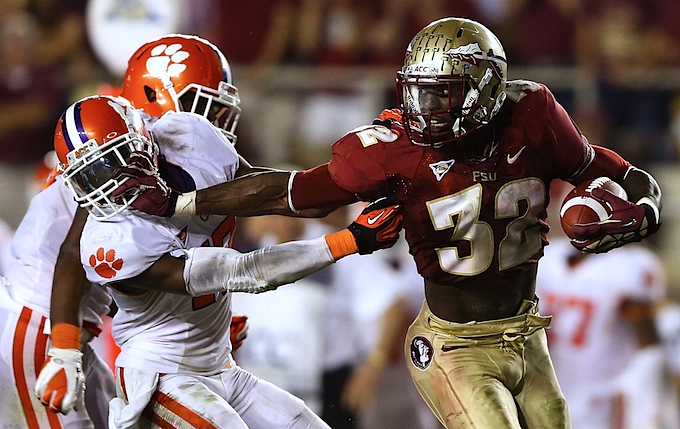 1. Florida State 49, Clemson 37. Florida State's defense was not exactly as advertised through three quarters – Clemson scored 31 points in the first 35 minutes – but the second half outburst on offense was exactly the display of vintage firepower the 'Noles have been waiting to see unleashed for a decade. A little longer than that, in fact: The total output for the night, 667 yards, was the most by a Florida State offense (or against a Clemson defense) in any game since FSU hung 771 yards on the Tigers back in 2000. That team went on to finish No. 1 nationally in total offense and play for the BCS championship on the Heisman-winning arm of Chris Weinke. Man-for-man, this looks the best bunch of Seminoles since by a wide margin, and obviously worthy of the lofty ranking that reflects that.

But at what point does the promise of future returns overcome the specter of past results, which have been fruitlessly promising returns based on infrastructure, talent and pedigree for so long? There's still a distinct aura of "fool me twice, shame on me" about a program that has consistently fallen victim to the kind of random losses (see: Wake Forest and Virginia in 2011, N.C. State in North Carolina in 2010, South Florida and Boston College in 2009, Boston College and Georgia Tech in 2008, etc., etc.) that turn a potentially great year into yet another missed opportunity. Clemson may have been the tallest hurdle on the schedule, and FSU cleared it with relative ease. From here on, the greatest stumbling block is the Seminoles' own consistency.

2. Oregon 49, Arizona 0. The only thing more terrifying than Florida State with a legit offense? Oregon with a legit defense, even if the Ducks' first in-conference shutout since 2003 does come with an asterisk: Arizona had opportunities on seven different occasions with the ball inside the Oregon 30-yard line, including each of the Wildcats' first five possessions of the night, which collectively resulted in two interceptions, a fumble, a missed field goal and three turnovers on downs. Give those same opportunities to USC or Stanford later in the season, and the results may be very different, especially if the Duck offense takes an entire half to get revved up.

But: That said, it is always poor form to quibble with a 49-point romp over a ranked, conference opponent that came in averaging more than 46 points per game, and left averaging just 3.9 yards per play. (Especially when said romp includes this play) Ultimately, Oregon is Oregon, which right now is good enough for No. 2 in both major polls. No arguments here.

3. LSU 12, Auburn 10. The Ducks' bump comes at the expense of the previous No. 2, LSU, which turned in a sub-Louisiana-Monroe effort on offense and was very nearly bounced despite holding Auburn to its standard output of jack points on shit yards. Over the last three quarters of this game, both offenses combined for 12 punts, three turnovers, three field goal attempts and zero touchdowns, which justifies Oregon's promotion for entertainment value alone.

The caveat here is that this was the first go-round for LSU quarterback Zach Mettenberger a) In enemy territory, and b) Against a real, live SEC defense, even if it was one that came in yielding 442 yards per game. Fine: At least he didn't turn the ball over. But if that's what the offense looks like against one of the more generous defenses in the league, how is it going to go in the four-game October/November stretch against Florida, South Carolina, Texas A&M and Alabama? We're only one week from finding out. 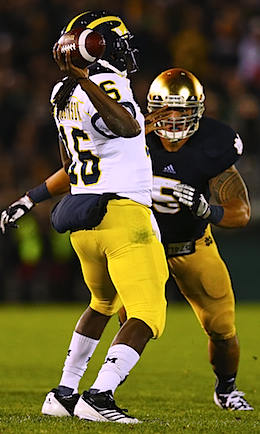 4. Notre Dame 13, Michigan 6. I am fully prepared to praise the Fighting Irish defense to the heavens. Zero touchdowns allowed in back-to-back wins over Michigan and Michigan State? Four interceptions off Denard Robinson on four consecutive passes? Brilliant stuff. I don't even care what's going on with the quarterbacks. This is a solid, veteran, championship defense that has earned its gold-specked ranking and reputation. But I still refuse to board the bandwagon as long as the schedule still includes dates with Stanford, Oklahoma and USC.

The assumption behind that skepticism is that the Irish will have to win at least one of those three to get to ten wins and a realistic shot at a BCS bowl, while also avoiding a random letdown against the likes of Miami, BYU or Pittsburgh. (They've earned the benefit of the doubt against Boston College and Wake Forest.) I'm willing to concede one half of that equation, but the offense being what it is right now, not both. So fine, I lied: Notre Dame needs to settle on a quarterback who can give them three or four solid scoring drives per game without putting the defense's back against the wall.

5. South Carolina 31, Missouri 10. Easy to say after a 21-point wipeout of a respectable opponent, but man, I really like South Carolina at full strength. I couldn't make that leap before Saturday, because I hadn't seen enough from quarterback Connor Shaw against real defenses. Against Mizzou, though, Shaw may as well have been throwing against air: After missing his first pass of the day, he completed his last 20 in a row for 249 yards and two touchdowns. This is with Marcus Lattimore still Marcus Lattimore things as a rusher and receiver (Saturday: 147 total yards, 2 TDs) and a defensive line that is conceivably in the class of the vaunted fronts at Alabama and LSU. A few non-Lattimore-based threats are even beginning to emerge in the form of Ace Sanders, Bruce Ellington and Damiere Byrd.

We'll find out soon enough when the Gamecocks hit the annual October gauntlet against Georgia, LSU, Florida and Tennessee in consecutive weeks. But I wouldn't be the least bit surprised if a healthy Carolina took three out of four in that stretch, or if one of them was over LSU. The operative term there being healthy.

6. Kansas State 24, Oklahoma 19. I'll admit: I was a K-State skeptic coming into the year, based on the Wildcats' unsustainable habit in 2011 of winning close games while being outgained by significant margins; without the benefit of turnovers or big, field-flipping plays on special teams, they weren't nearly as successful as the 10-3 record indicated on a down-by-down basis. And how consistently can you rely on turnovers and special teams to overcome that fundamental gap?

Pretty damn consistently, as it turns out: Through four games, Kansas State is +5 in turnover margin, ranks in the top ten nationally in both punt and kickoff returns and has already scored three non-offensive touchdowns, the biggest coming Saturday night on a sack-n-strip by linebacker Justin Tuggle that was scooped up in the end zone by Jarell Childs for the Wildcats' first touchdown of the game. (Two other Oklahoma turnovers were converted into ten more points for the Wildcats, who didn't give the ball away at all.) This a more balanced, improved team that still does all those little things at the margins. Considering that they also played the Sooners to a virtual draw in terms of total yards and yards per play – and crushed Miami on both fronts earlier this month – I don't see any reason not to move KSU to the top of the short list of serious Big 12 contenders.

7. Alabama 40, Florida Atlantic 7. In case you were wondering, Nick Saban was "much more pleased" with Alabama's romp over FAU than with last week's 52-0 romp over Arkansas, despite the garbage time touchdown for the Owls: "Just the way we approached the game, the way we competed in the game, and we got to play a lot of players. I think those things are going to benefit us down the road." So the SEC had better watch out for that team, you know, down the road.

8. Miami 42, Georgia Tech 36 (Overtime). There is no burgeoning Miami bandwagon that I'm aware of, and I wouldn't be hopping on it if there was. But just because it deserves to be acknowledged: The Hurricanes' second half comeback from Georgia Tech's first half comeback Saturday marked their best win under second-year coach Al Golden, the best performance of quarterback Stephen Morris' career and the first glint of optimism in Coral Gables since the specter of the Nevin Shapiro scandal descended on the program last year.

More importantly, it moved the 'Canes to 2-0 in ACC play with a handy head-to-head tiebreaker over one of the other contenders in the Coastal Division. As overmatched and inept as Miami looked at Kansas State earlier this month, take a look at the ACC Coastal standings right now and give me one good reason The U can't win it.

9. Minnesota 17, Syracuse 10. Details of this game are not important, except to note that Minnesota – not-so-proud owner of just three wins in both 2010 and 2011 – has completed its non-conference schedule with a perfect 4-0 record. Yes, that run includes a triple-overtime escape from UNLV and a close call with Western Michigan. Given the fate of the rest of the conference this September, it still puts the Gophers in the upper echelon of the Big Ten.

That's right: Colorado, last seen being publicly humiliated by Fresno State to fall to 0-3, actually won a game Saturday. Not only that, it won a game on the road. Not only that, it won a game in which it trailed by 17 points with a hair over seven minutes to play in the fourth quarter. From that point, the Buffaloes a) Connected on a 70-yard touchdown pass from Jordan Webb to Nick Kasa, b) Broke an 84-yard touchdown run by Tony Jones; c) Drove 70 yards in three minutes for the winning touchdown run by Webb with nine seconds on the clock; and d) Instantly reversed the program's trajectory from one of doom and despair to one of renewal and hope.

Well, maybe we'll hold off on d) for now. But there's no denying this: The Colorado Buffaloes are in first place.