Attention Big 12: Oklahoma has been Snyder'd. You are all on notice.

In 2012, in the most up-tempo, high-scoring, spread-happy conference in college football, Kansas State's upset over Oklahoma was vintage Snyderball in every respect.

Share All sharing options for: Attention Big 12: Oklahoma has been Snyder'd. You are all on notice. 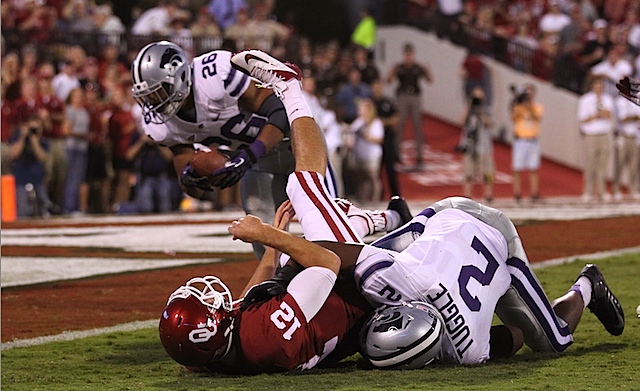 Kansas State 24, Oklahoma 19
- - -
1. Bill Snyder is not underrated, underappreciated or overlooked as a head coach: To the contrary, he's been feted pretty much nonstop as one of the best in the game for the better part of two decades, because it's so obviously true. But it is worth considering what a truly bizarre decision it was, in December 2008, for Kansas State to raise him from the dark underground lair where he'd been resting comfortably in retirement to re-resurrect a struggling program that bore no trace of the improbable powerhouse he built in the nineties. Snyder was old (69), he hadn't coached in three years, and his last two teams in 2004 and 2005 had both finished with losing records. He was a great coach, once. What gave anyone the idea that he still had the energy, stamina, patience or relevance with young players to become one again, from square one?

2. And yet, in 2012, in the most up-tempo, high-scoring, spread-happy conference in college football, this victory was vintage Snyderball in every respect:

Pace: Kansas State controlled the line of scrimmage, outrushing Oklahoma 213 yards to 88 on a yard-and-a-half more per carry, and subsequently controlled the clock: The Sooners finished with a nearly ten-minute deficit in time of possession, and got off fewer plays on offense (70) than in any Big 12 game since 2009.
- - -
Turnovers: Kansas State committed none and forced three, converting them into 17 points. The play of the game was linebacker Justin Tuggle's sack-and-strip of OU quarterback Landry Jones in the second quarter, which was scooped up by teammate Jarell Childs for the Wildcats' first touchdown.
- - -
Finish: Leading 17-13 with 12 minutes to play, the Wildcats embarked on the only scoring drive of the night that wasn't preceded by an OU turnover, marching 77 yards in just under five minutes to extend the lead to 24-13 on a nine-yard run by tailback John Hubert. A few minutes later, now up 24-19 after a prompt Oklahoma response, the Wildcats proceeded to kill the final four minutes on a pair of clutch third-down conversions by quarterback Collin Klein, one passing and one rushing. Prior to those two drives, K-State was 4-of-11 on third down; on those two, it finished 3-for-3, including conversions of 3rd-and-11 and 3rd-and-12 to keep the sticks moving and the clock ticking. 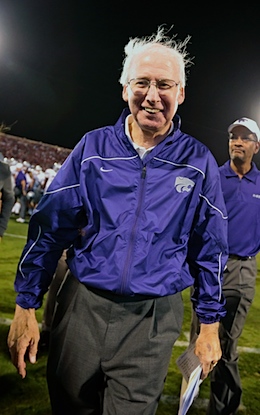 3. This is not a new observation by any means, but it's always important to note that, compared to a blue-chip recruiting juggernaut like Oklahoma, Kansas State is essentially a makeshift assemblage of castoffs, misfits and obscurities from somewhere else. Fully half of the Wildcats' starting lineup in Norman, 11 out of 22, began their college careers at a school other than Kansas State, including the entire defensive line and three-fifths of the secondary. Former Miami linebacker Arthur Brown led the team as usual with eight tackles. Tuggle, who made the play of the game off the bench, started out as a quarterback at Boston College. Juco transfers Allen Chapman, Jarard Milo and Nigel Malone combined for 19 tackles in the secondary. Juco transfer Adam Davis had four stops and registered a tackle for loss for the third consecutive game. Two other juco guys, John Sua and Vai Lutui, both held their ground in the middle of the defensive line.

Even the emerging star of the show, Collin Klein, interested scouts more as a basketball player in high school, and began his K-State career as a wide receiver. When these guys first walked on campus, Oklahoma would not have considered any of them worth the time of day.

4. One early loss to a ranked opponent is not an automatic death sentence in the Big 12 or the BCS, but there is no indication that Oklahoma is a championship-caliber team on either level. As a four-year starter and ostensible Heisman candidate, Landry Jones will get a significant share of that blame after committing two costly turnovers that led directly to K-State points, which will not help his cause with the portions of the fan base already clamoring for Tebow-esque (or Klein-esque?) backup Blake Bell. But the overriding issue is still in the trenches, where both lines are clearly reeling from injuries and attrition. The template is no secret: Kansas State ran effectively between the tackles, made Oklahoma's ground game irrelevant and harassed Jones into multiple mistakes.

None of which will come as a surprise to anyone who watched the Sooners barely escape UTEP in the opener, where Jones spent most of the night running for his life. The usual firepower is all there, but for the moment, the muscle is not.

5. Prior to last year, Oklahoma had lost exactly one Big 12 home game under Bob Stoops, a 16-13 upset at the hands of Les Miles-led Oklahoma State in 2001. It was a solid decade before Texas Tech ended that streak in an inexplicable ambush last October. Now, it's taken a little less than a year for OU to fall again in Norman as double-digit favorites. The aura of invincibility that used to meet opponents in Memorial Stadium never really followed the Sooners on the road – they've lost at least two road/neutral games in every season since 2004, including seven true road trips from 2009-11 – but suddenly it's getting harder to make the case it still exists in Memorial Stadium, either.