In his old haunting grounds, Denard Robinson coughs up the echoes

Share All sharing options for: In his old haunting grounds, Denard Robinson coughs up the echoes 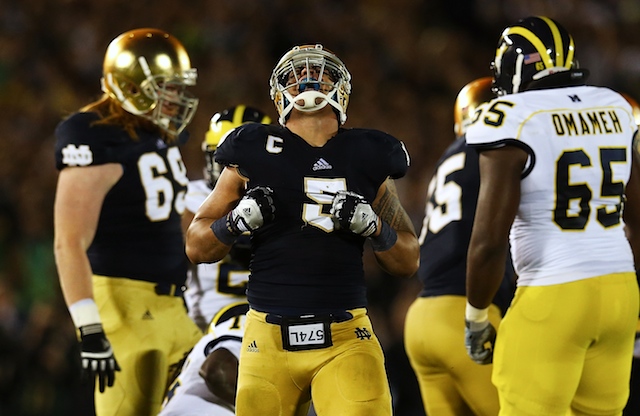 Notre Dame 13, Michigan 6
- - -
1. Of all the weeks to write an ode to Denard Robinson, and to Denard Robinson's performances against Notre Dame, specifically, all of a sudden the one immediately preceding the most spectacular meltdown of his career does't look like the most sage choice. For every dagger Robinson stuck in the Fighting Irish in those exhilarating, last-second comebacks in 2010 and 2011, he was repaid tonight with interest. Interest in the form of interceptions.

2. For the record, Robinson's pass efficiency rating, 69.1, was the worst of his career as a starter, narrowly edging the 69.5 he registered last September after throwing a pair of interceptions against San Diego State. (The only other sub-100 day of his career, efficiency wise, was in the Wolverines' 2010 loss at Ohio State.) There's more than a little irony to the fact that it comes on the same field where his raw brilliance originally made him a star in just his second start as a sophomore. Hard as they've worked the last two years to meet one another in the middle, Robinson still fits about as well in offensive coordinator Al Borges' philosophy as a thoroughbred behind the wheel of a RangeRover. 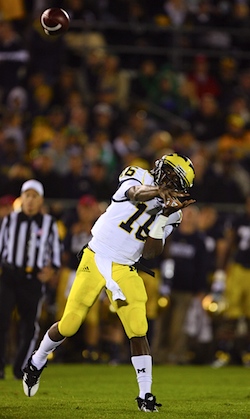 3. Had it not been for Robinson, title of "Top Goat" may very well have gone to his freshman counterpart, Everett Golson, who may be in for a sobering week anyway after serving up a pair of interceptions of his own in the first half – including one on the Irish's first play from scrimmage – and was summarily yanked in favor of the resident standby, Tommy Rees. Statistically, there's no comparison: Golson was 3-of-8 passing for 30 yards (3.8 yards per attempt), no touchdowns and two picks; Rees was 8-of-11 for 115 yards (10.5 per attempt) and zero turnovers. Brian Kelly is already on record after the game attempting to quash a nascent quarterback controversy ("Everett is out starter"), but this was the second time in three weeks Kelly has decided to call on Rees in a tight spot, and the second time Rees has delivered – first with a drive for the game-winning field goal against Purdue, now with a sustained drive for the Irish's only touchdown of the night.

As nasty as this defense is at the moment, the question isn't so much which quarterback can deliver more conventional production (i.e. yards and points) as it is which one can avoid the crippling error that disrupts the current pH balance. Golson served up a couple of those tonight, and as strange as it is to think about him as the steady, seasoned veteran, "Turnover Tommy" may be better suited to that purpose. If Golson is the future, at 4-0, each additional win puts that much more emphasis on the present.

4. Manti Te'o, you may pick up your Butkus Award now. Barring injury or the complete, unforeseen implosion of Notre Dame's defense, Te'o's back-to-back, MVP efforts in high-profile, nationally televised stranglings of Michigan and Michigan State basically guarantee his presence on the postseason awards circuit. His stat line tonight: Eight tackles (3 solo, 5 assist, 1 for loss), one QB hurry and two interceptions, just one week after turning in 12 tackles with a couple of passes defended and a fumble recovery against the Spartans, all as the captain of a defense that hasn't allowed a touchdown in two full games.

At this point, Charlie Weis would like to remind you that he deserves complete credit for Te'o's presence. No need to thank him.

5. The really frustrating part for Michigan fans? As suicidal as their own offense was, Notre Dame's struggles meant that victory remained cruelly within reach right up to the closing seconds – quite literally, in fact, given that the Wolverines had the ball with a first down inside the ND 25-yard line on five separate occasions and came away with only the two field goals on the final two possessions. In the first half, the offense took over at the ND 10-yard line following Golson's insta-pick on the opening series, and came up empty on a missed field goal; a few minutes later, Michigan blew a long, sustained drive to the ND 11 on the halfback pass by Smith that was picked off in the end zone. In the second half, a long drive to open the third quarter was thwarted by a fumble, and the desperation field goal drives resulted in… well, obviously.

Notre Dame's defense has hardly earned comparisons to Alabama's, but in two games against top-shelf competition, Michigan has turned the ball over nine times and only scored touchdowns courtesy of a pair of long, fluky bombs against the Crimson Tide with the game in the bag. Their only sustained drives have either been exploded by turnovers or fizzled out well short of the end zone. In his senior year, Denard Robinson still appears to be going backward as a passer, not forward. He has no reliable complement to absorb more of the defense's attention. The offensive line is a work in progress. The only good news is that there's nothing at the moment that qualify any other team in the Big Ten as "top shelf" in any capacity.