No, really: Fear the Beaver(s)

Share All sharing options for: No, really: Fear the Beaver(s) 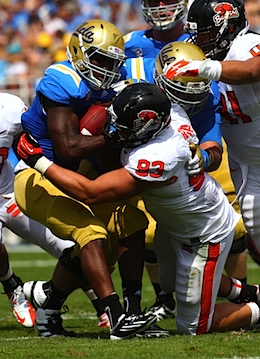 Oregon State 27, UCLA 17
- - -
1. Well, if the Wisconsin game didn't prove it, I think it's safe to assume that Oregon State is pretty good against the run. Which is saying a lot for an outfit that was about as bad as you can be on that front last year.

Coming into this game, UCLA was averaging well over 300 yards on the ground as a team, and Johnathan Franklin was leading the nation individually on more than eight yards per carry. Two weeks ago, the Bruins racked up 344 rushing on Nebraska, 217 from Franklin alone. Today: They leave with a grand total of 72 yards rushing, only 45 of them on the legs of their emerging workhorse, who managed 3.8 per carry on a long gain of thirteen. September Heisman? Say sayonara.

2. Combined with their thorough throttling of Wisconsin's ground game two weeks ago, the Beavers do appear to have legitimately overhauled the worst run defense in the Pac-12. That's not hyperbole: OSU allowed more yards on the ground in 2011 than any other team in the conference, in large part due to big games at their expense by Wisconsin (208 yards on 43 carries) and UCLA (211 on 49 carries) in back-to-back losses in the same spot on the schedule. It was downhill from there. But that front seven was anchored in large part by a trio of freshmen, Scott Crichton, Dylan Wynn and D.J. Welsh, who have clearly made a leap as sophomores: Between them, Crichton, Wynn, Welsh and fellow sophomore Feti Taumopeau have already combined for eight tackles for loss in two games.

Now: Let's see how they hold up next week against Arizona's "spread 'n shred" routine in Tucson.

3. The other obvious sophomore leap was by the quarterback, Sean Mannion, who was just "efficient" against Wisconsin but really flashed his vaunted arm today, most notably on touchdown passes covering 75 and 42 yards to Brandin Crooks and Markus Wheaton.

Mannion finished 24-of-35 for 379 yards with six completions covering at least 20 yards – all of them to Crooks and Wheaton – without a lot of ground support; the Beavers netted just 122 rushing on three yards per carry. It wasn't perfectm but again, the freshman growing pains of 2011 are paying dividends.

4. On a similar note, there's still not much to complain about re: UCLA's freshman quarterback, Brett Hundley, who went for 372 yards passing, added 32 rushing, accounted for both of the Bruins' touchdowns and didn't turn the ball over. But consistently moving the chains sans a running game or quick strike is an issue: UCLA was 2-of-15 on third downs and came away without points on four separate trips into Oregon State territory, without giving the ball away once.

5. UCLA is the latest team to take a page from Oregon's playbook with those giant hieroglyph boards on the sidelines, and the Bruins' versions are as delightfully inscrutable as ever: 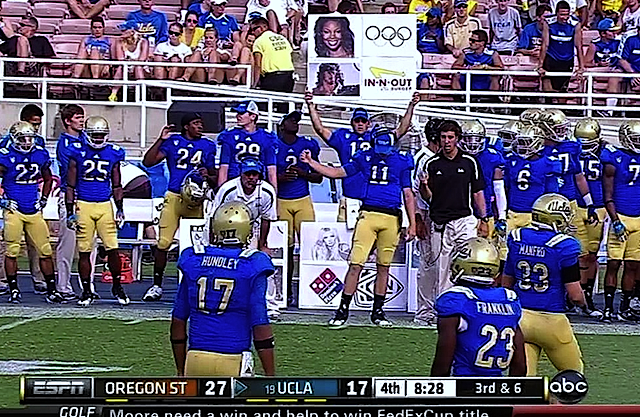 Which just goes to prove what they always say: It's the Jimmies and Joes, Not the Reeses and Rambos.