Share All sharing options for: Big Ten Marked for Death 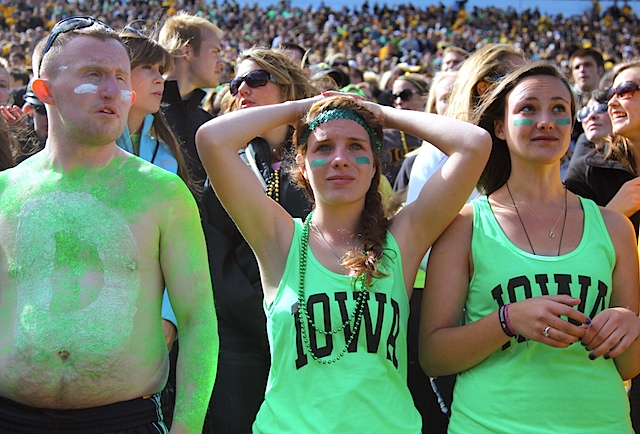 Central Michigan 32, Iowa 31 • Ohio State 29, UAB 15 • Wisconsin 37, UTEP 26
- - -
1. Inevitably, Iowa lost to a MAC team. And it didn't just lose to a MAC team in regular, embarrassing fashion: It lost in improbable, soul-wrenching fashion, by allowing a touchdown, an onside kick and a game-winning field goal in the span of 45 seconds.

Prior to that, CMU had driven 64 yards in seven plays to pull within two, 31-29, but failed on the subsequent two-point conversion to tie with less than a minute to play, apparently ending the upset bid. Cue: Successful onside kick. Cue: Personal foul on Iowa that moved the ball into Hawkeye territory. Cue: Game-winning field goal. And of course, cue: Another round of calls to fire Kirk Ferentz.

2. Not that that makes the final score any less embarrassing. The Hawkeyes' loss is the third this season by a Big Ten team at the hands of the MAC (see also: Ohio 24, Penn State 14 and Ball State 41, Indiana 39) and its tenth outside of the conference altogether, only driving the league's fading reputation that much further down in the hole. Depending on what happens to 3-0 Minnesota tonight against Syracuse, the only undefeated teams in the league when conference play opens next week will be Ohio State and… any guesses? That's right: Northwestern.

But the Hawkeyes' flop today is arguably the worst of them all: The last time we saw Central Michigan, the Chippewas were being ground into a fine paste by Michigan State in a game that may have been even more lopsided than the 41-7 score reflected. Iowa's season to date: 1. A one-point win over Northern Illinois, 2. A home loss to Iowa State in which the Hawkeyes failed to score a touchdown, 3. An uninspiring win over Northern Iowa and now 4. Well, see above. I would say the Hawkeyes are in for a long year in conference play, but honestly, at this point, I wouldn't rule out anything.

3. The one positive for Iowa: Sophomore running back Mark Weisman, a sixth-string walk-on (literally) playing only because there are no other healthy bodies left in the wake of the Angry Iowa Running Back Hating God, whose furious wrath has stricken no fewer than five Hawkeye rushers with assorted injuries, suspensions and dismissals in the last six months. Either Weisman is brazenly defying AIRBHG, or he is actually the long-awaited messiah. 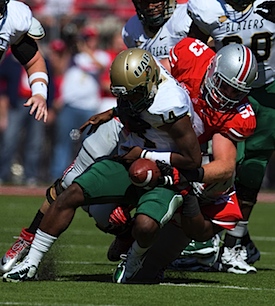 Today, he rumbled through CMU's defense for 217 yards and three touchdowns on 27 carries, the best afternoon by any Iowa running back since All-American Shonn Greene went for the same number in a 2008 win over Wisconsin. (Weisman was also the only Iowa player credited with a carry.) Last week, he turned in a 113-yard, three-touchdown effort in the win over Northern Iowa, which will means that he'll likely rank among the league's top five rushers on Monday morning on the strength of the last two games alone. Which means he may want to go ahead and start looking into a good insurance policy.

4. The final scores look fairly routine, but it certainly didn't help the burgeoning "B1G LOL" narrative that bellwethers Ohio State and Wisconsin spent significant chunks of the first half struggling against ostensibly inferior competition for the second week in a row. Wisconsin took about a quarter to get on track against UTEP, hitting the gas offensively for the first time this season about the same time that star tailback Montee Ball left the game with an apparent concussion. Ohio State actually trailed UAB in the final two minutes of the first half (a killer UAB fumble handed the Buckeyes a free touchdown just before the half), and didn't put the game away until the final five minutes; for the game, the Blazers outgained the Buckeyes by more than 50 yards, 403 to 347, and limited the heretofore explosive OSU offense to a single play covering more than 20 yards – a 25-yard completion from Braxton Miller to Philly Brown. The only thing separating a 14-point margin on the scoreboard from the upset of the year was the –2 turnover margin.

The good news is that conference play arrives next week, and aside from Purdue (vs. Marshall next week) and Indiana (at Navy on Oct. 20), there are no more chances for non-conference humiliations until the bowl season. So it cannot get any worse.

5. Of course, as I write, Michigan State is currently losing to Eastern Michigan in the third quarter. Happy thoughts!