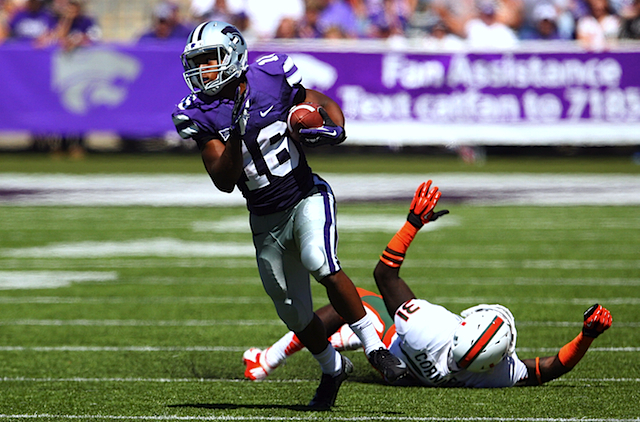 •TYLER LOCKETT, WR/KR, Kansas State.
K-State can't match Oklahoma's arsenal of skill talent on offense, but it certainly can on special teams, where Lockett finished with the best kickoff return average in the nation as a true freshman and is well on his way to turning the same trick as a sophomore: With his 96-yard sprint to paydirt last week against North Texas, Lockett has three career touchdowns on just 20 returns, on which he's averaging a little over 37 yards per pop. Against a fast-paced, high-scoring opponent on the road, field position is an indispensable equalizer.

In this case, his talents may be more useful than usual to the offense, too. Last year, Lockett was instrumental in keeping K-State on pace with Oklahoma State in a near-upset in Stillwater, where he added 116 yards and a touchdown reception from scrimmage to another 199 yards in the return game. In general, the Wildcats will be perfectly content to grind grind grind and slow the pace to the halt in the interest of keeping Oklahoma's offense on the sideline. But if they need a big play to hang with the Sooners – spoiler alert: they will – Lockett is by far the most likely guy to give it to them, by whatever means necessary. 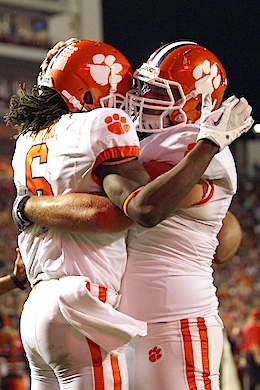 •DALTON FREEMAN, C, Clemson.
Ferocious as Florida State's defensive line may be, Clemson held essentially the same guys in check last year en route to 443 yards and 35 points, largely thanks to Freeman's All-ACC presence in the middle. This year, Freeman is one of only two starters back from the 2011 front, and the unquestioned anchor against the stiffest test the Tigers will face all season.

•JUSTIN BRITT, LT, Missouri.
Britt moved from his usual home on the right side to the left last week in place of injured captain Elvis Fisher, and held up OK in the win over Arizona State. Today, with Fisher still nursing his injured knee back in Columbia, Britt draws the impossible task of blocking the Gamecocks' blue-chip, übermensch defensive end, Jadeveon Clowney, who has already abused opposing linemen for three sacks and six tackles for loss in three games. The last top-shelf pass rusher Missouri saw, Georgia's Jarvis Jones, sacked quarterback James Franklin twice, forcing a critical turnover and leaving Franklin with a shoulder injury that kept him out last week against ASU. If Britt is overwhelmed by Clowney – or by his All-SEC-caliber counterpart, Devin Taylor – Franklin will be the one left feeling it. Again.

•JAKE FISCHER, LB, Arizona.
Another spoiler alert: Oregon is going to score a lot of points tonight in Autzen Stadium, just like Oregon always scores a lot of points in Autzen Stadium and just about everywhere else. But Arizona is going to put some points on the board of its own, and exactly how many the Wildcats need from their own attack will hinge substantially on their defensive leader's ability to get the rest of the unit in the right place and on the right page in the extremely limited time the Ducks allow between snaps. And of course, on Fischer making a few plays of his own: After missing all of 2011 with an injury, he's currently leading the team in tackles by a wide margin, and tied for the team lead in tackles for loss.

•DEVIN GARDNER, WR, Michigan.
Gardner, a converted quarterback, is still raw as a wideout, but at 6-foot-4, he also appears to be Michigan's most viable downfield threat: He has a touchdown catch in each of the Wolverines' first three games, two of them from at least 40 yards out. Against a hopelessly green Notre Dame secondary – thanks to injuries, senior safety Zeke Motta is the only starter in the back four tonight who's started more than three games, or who started his college career on defense – Gardner is the guy to exploit the learning curve, if he can get over his own.