Your Saturday In Detail: Everyone's invited to the next Seminole sack party

Share All sharing options for: Your Saturday In Detail: Everyone's invited to the next Seminole sack party 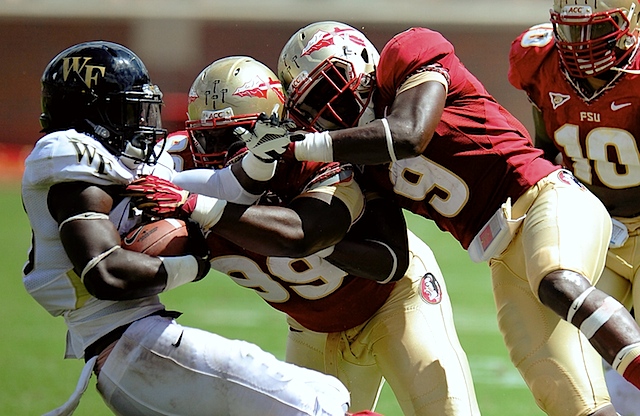 • TCU will outgain Virginia by more than 150 yards of total offense, but still need a last-minute stop on defense to fend off an upset bid after committing multiple red zone turnovers for the second consecutive week. The Cavalier offense will only find the end zone once against a defense that's yet to give up a touchdown in its first two games, but will also keep the game within striking distance courtesy of a defensive or special teams score.
- - -
TCU 25, Virginia 18

• After a quiet start in Missouri's first three games, blue-chip freshman Dorial Green-Beckham will have a breakout game in the Tigers' trip to South Carolina, including his first career touchdown reception. But he'll still be outshone by last year's top recruit, Jadeveon Clowney, who will notch a pair of sacks on Mizzou quarterback James Franklin and force a key turnover to set up a decisive Gamecock touchdown.
- - -
South Carolina 27, Missouri 21 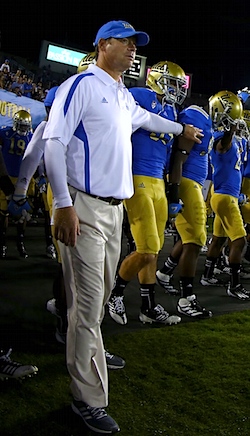 • Still coasting off the high of its stifling upset over Wisconsin, Oregon State's defense will begin its tumble back into the Pac-12 cellar when UCLA's offense racks up 250 yards rushing and passing for the fourth consecutive week. Meanwhile, at least half of the 60,000 fans in the Rose Bowl will giggle immaturely every time the PA announcer says "Beavers," and later receive a stern post-game chastisement from coach Jim Mora after a graduate assistant reluctantly explains to him why.
- - -
UCLA 34, Oregon State 16

• After being held without a touchdown pass for the first time in 15 games in last week's loss at Stanford, USC quarterback Matt Barkley will drop five touchdown passes on Cal in a resounding rebound by the Trojans, to five different receivers. After the game, coach Lane Kiffin will refuse to acknowledge his quarterback's existence and silently storm out of a press conference when a soon-to-be-banished reporter mentions Barkley by name.
- - -
USC 38, California 17

• Auburn will draw first blood against LSU courtesy of an Onterio McCalebb kick return to open the game, and subsequently be buried by five unanswered LSU touchdowns – three of them the direct result of turnovers by Auburn quarterback Kiehl Frazier. After the game, Les Miles will praise his team's defense as "sufficiently murderiferous."
- - -
LSU 37, Auburn 10

• Turning the tables on Michigan after back-to-back-to-back defeats in the final minute, Notre Dame will move to 4-0 courtesy of a Kyle Brindza field goal as time expires. The game-winning drive – launched immediately following a go-ahead touchdown by the Wolverines – will cover 75 yards over the course of seven-and-a-half minutes, feature four fourth-down conversions and, despite the best efforts of the athletic department to create a louder atmosphere in Notre Dame Stadium, take place in almost complete silence.
- - -
Notre Dame 24, Michigan 22

• On the cusp of a breakthrough SEC win, Vanderbilt will blow a fourth quarter lead at Georgia when a red zone turnover in UGA territory turns into a field-flipping, game-changing gaffe that sets up the Bulldogs' go-ahead touchdown. Demoralized, Vandy will allow another late, cheap score to push the final margin to double digits as coach James Franklin openly wonders whether it's even worth bothering to try anymore.
- - -
Georgia 28, Vanderbilt 17

• Oklahoma will jump on top of Kansas State by three scores in the first quarter en route to a comfortable conference win, but still be forced to admit the toughness of Wildcat quarterback Collin Klein after he plays the entire second half – and scores two touchdowns – while technically unconscious. "The doctors tried to keep from going back out, but I wouldn't listen," he will say after the game, "mainly because my confused mental state didn't allow me to hear them."
- - -
Oklahoma 38, Kansas State 20

• Clemson's offensive line will hold up OK against Florida State's fearsome pass rush, but fail to generate push in the running game in a physical, low-scoring Seminole win. After two quarters, FSU's only touchdown of the first half will come courtesy of a turnover by Tiger quarterback Tajh Boyd, but the 'Noles will only need to find the end zone once in the second half while managing to keep the Tigers' star sophomore, Sammy Watkins, out of it altogether.
- - -
Florida State 22, Clemson 17

• In an escalating game of one-upmanship, Rich Rodriguez and Chip Kelly will compete between plays to determine which coach will be the first to swim a mile, learn Mandarin, stuff and mount the head of a six-point buck, upholster a worn-out couch, record the audio version of his memoirs and solve the looming fiscal cliff during the course of Oregon's shootout win over Arizona. Kelly will initially be declared the winner, but will later be disqualified when it's discovered he lifted the basis of his spec script for Two Broke Girls from an obscure episode of Laverne and Shirley.
- - -
Oregon 52, Arizona 39