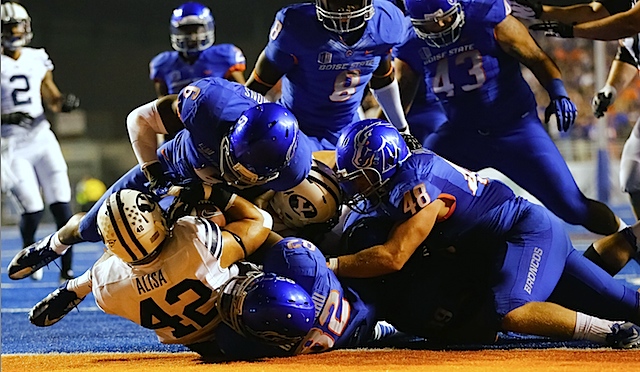 Boise State 7, BYU 6
- - -
1. It was obvious enough before tonight that this edition of Boise State is a far, far cry from the juggernaut that ran up the best record in college football over the last four years and obliterated just about everyone who set foot on the blue carpet over the last ten. But offensively, at least, it may be a lot further than we thought. Granted five turnovers from BYU's overly generous, fairy godmother of an offense, the Broncos managed to turn exactly one of them into points – and the conversion didn't even belong to the offense:

That's defensive tackle Michael "Motorin'" Atkinson, returning the second of three consecutive turnovers by BYU quarterback Riley Nelson to open the second half for that exceedingly rare gem: A Fat Guy Touchdown that also turns out to be the game-winning touchdown.

Until the final five minutes, it looked like it was destined to be the only touchdown. Not only did the Boise offense fail to score: Even including Atkinson's decisive rumble to paydirt, the Broncos finished with fewer points (7), total yards (261) and first downs (13) than in any home game since the turn of the century.

As if it needed to be repeated: Kellen Moore and Doug Martin are not walking through that door. At this point, they'd probably settle for Bart Hendricks.

2. As for the other gifts, how do you manage to turn four turnovers into zero points? By leaving them laying all over the field. Between a missed field goal in the first quarter and an incredible five turnovers on downs, the Broncos let somewhere in the neighborhood of 18 to 42 potential points slip away, completely unexploited. Three of the five possessions that ended in a failed fourth down attempt began in BYU territory, including one that began at the Cougar 1-yard line following a fumble by Nelson and subsequently ended there after the BYU defense turned away four consecutive plays from the goal line. On its worst night, even if it failed to move the ball consistently, at least the old Boise offense would have been able to take advantage of those opportunities and have the game wrapped up in a neat little bow by the end of the third quarter.

The new offense seems more adept at un-wrapping, a clear trend that began in the opening night loss at Michigan State. Then as now, the defense created multiple takeaways, forcing the Spartans into three interceptions and a fumble. And then as now, the defense supplied the Broncos' only touchdown of the game on an interception return, while the offense turned the other three turnovers into a grand total of three points in an eventual four-point loss. Tonight, the outcome was different – BYU's offense could really use a Le'Veon Bell, couldn't it? – but the complete absence of both firepower and opportunism was all too familiar. 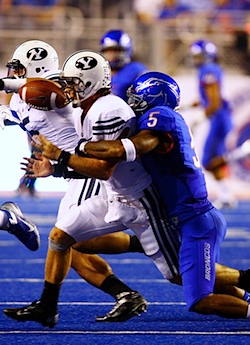 3. Also familiar, and equally disconcerting: Chris Petersen has absolutely no faith in his kicking game. In 2010 and 2011, Boise's otherwise flawless campaigns were marred in both seasons by misses on chip-shot field goals that would have eventually sent the Broncos into a BCS game with a perfect record. There wasn't nearly as much tonight riding on Michael Frisina's missed 33-yarder in the first quarter, but fear of Frisina did seem to be the primary motivation in the decision to keep going for it on fourth down throughout the game, even well within in field goal range. A successful kick in any one of those situations would have completely diffused the drama at the end of the game by giving Boise a two-score lead in a game in which it took the opposing offense 56 minutes to even look like it might threaten to score once. At this rate, it's certainly not going to be the first game the Broncos win or lose on a kick, or the decision to eschew one.

4. I'm certain I'm in the minority, but I was generally for Bronco Mendenhall's decision to go for two after BYU's one and only touchdown of the night with 3:37 to play, for two reasons beyond my usual preference for gusto in the clutch. One: Prior to the preceding drive, which covered 95 yards in 11 plays with a true freshman quarterback (Taysom Hill) at the wheel, the Cougar offense delivered what must have been the worst nine-tenths of a game in school history. Here are their first twelve offensive possessions of the night, in terms of yards (including penalty yards) and outcome:

Prior to its final trek across the length of the blue turf, BYU hadn't strung together a single drive covering 25 yards all night long. If you kick to send the game to overtime, why would you expect that to change? And two: If you're playing for the field goal in overtime, that means you're putting the game on the foot of one of the two kickers, Justin Sorensen and Riley Stephenson, last seen missing two separate attempts to take Utah to overtime at the end of last week's wild, 24-21 loss in Salt Lake City. Mendenhall has no more reason to trust his kicker(s) in a decisive situation than Petersen does.

So with points of any kind in overtime already looking like a 50/50 proposition, why not take a 50/50 shot at winning it right there in regulation, with some semblance of momentum at the offense's back for the first and possibly only time? At that point, after three hours of throwing play calls down a well, the chances of scoring the winning points from the two-yard line must have looked much more attractive than going back to the drawing board from the twenty-five. The decision backfired when the two-point pass fell incomplete, but I get where the man is coming from there.

If that guy was a replacement ref in the NFL, he'd turned into a meme and lead Around the Interruption or whatever it is for like a week straight.