Sooners set the bar against K-State, or: The Electric Wildcat Acid Test

Share All sharing options for: Sooners set the bar against K-State, or: The Electric Wildcat Acid Test 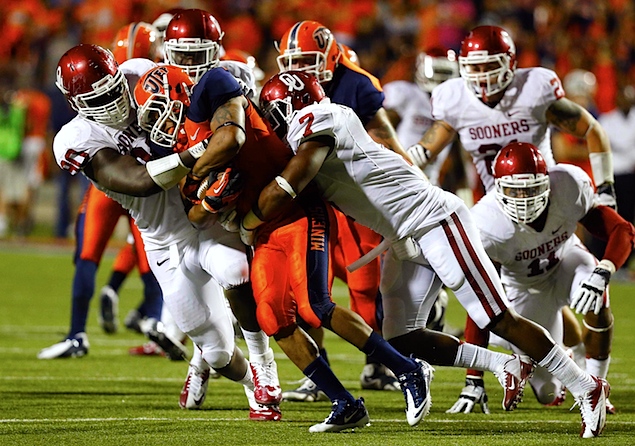 As usual, Oklahoma was everyone's pick this summer to emerge at the front of a deep, competitive pack in the Big 12, and as usual – depending on who you ask – that means the Sooners are among the select few with serious aims on a national crown. No surprise: When you've claimed seven conference championships and eight top-10 finishes in the last dozen years, you've earned the benefit of the doubt. It's just that, at the moment, the particular team meeting its first major test Saturday against Kansas State is saddled with so much doubt.

That would probably be the case even if the Sooners hadn't struggled so obviously at UTEP, which effectively played OU to a dead heat through three quarters on opening night. Heading into the fourth, the typically up-tempo, scoreboard-melting offense had found the end zone just once, courtesy of a single big play, and only led (by a score of 10-7) courtesy of a string of blown UTEP opportunities: The Miners missed three makable field goals from inside OU 25-yard line and turned the ball over twice on downs. Oklahoma finally pulled away in the fourth – again, thanks largely to a single big play – but not before allowing 207 yards rushing, a blocked punt, three sacks and countless other hits on senior quarterback Landry Jones, confirming the worst offseason fears over a) Significant attrition along both lines of scrimmage, and b) A hangover from last year's abrupt fade from relevance down the stretch.

Offensively, those fears didn't materialize until August, when senior mainstays Ben Habern and Tyler Evans were both ruled out for the season, taking 59 career starts with them. Meanwhile, signee Will Latu, a 6-foot-5, 315-pound junior college transfer with designs on the right tackle job, failed to make the cut academically and signed with Arkansas State instead. Even with regulars Lane Johnson (12 starts in 2011) and Gabe Ikard (25 starts over two years) still upright at left tackle and left guard, respectively, the line as a whole went in a matter of days from being one of the most veteran fronts in college football – one of only eight nationally with at least 100 career starts among returning members – to one of the greenest before the opening kickoff. Their first time out, it showed. 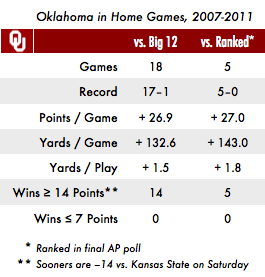 Their second time out, a 69-13 blowout over Florida A&M, is hardly relevant except in the fact that no one was seriously hurt. In fact, appropriately enough, the last time Oklahoma walked off a field feeling really good about itself may have been its trip to Kansas State last October, a 58-17 rout that emphatically spoiled the Wildcats' 7-0 start and thrust the Sooners back into the BCS championship picture after a still-inexplicable upset at the hands of Texas Tech the previous week. From there, OU lost top receiver Ryan Broyles for the season, Jones went an entire month without a touchdown pass, the defense was set on fire in a season-killing loss at Baylor and both team and quarterback alike were embarrassed in a 44-10 rout at the hands of Oklahoma State. Its final poll standing at the end of the regular season, 19th, was the lowest of any preseason favorite in the polls in 45 years.

Which leaves us with a team that certainly looks like Oklahoma, Perennial National Contender, on paper, but has not actually played like a contender on the field in the equivalent of half a season. In the other corner, Kansas State has, in a 52-13 annihilation of Miami that completely defied the 2011 template of the Wildcats as scrappy underdogs who can't win against ostensibly more talented teams without the benefit of turnovers and special teams. After Texas Tech's ambush last October, the Sooners are no longer automatic in Norman; after the scare at UTEP, the lingering issues are no secret. If they can't stop the run, K-State will pound Collin Klein and John Hulbert as many times as necessary to keep the sticks moving, keep OU's offense on the sideline and work the clock into submission. If they can't protect Landry Jones, bookends Adam Davis and Meshak Williams will make his night hell. If there's a breakdown on special teams, the Wildcats' opportunistic rush and return units will exploit it.

If the Sooners do what they're supposed to do, bury the UTEP game as a case of early rust and put K-State away by double digits, then we'll have a much better view of their claim as the class of the conference.