Superlatives, Week 1: In which you shall know Andre Ellington's velocity

Share All sharing options for: Superlatives, Week 1: In which you shall know Andre Ellington's velocity 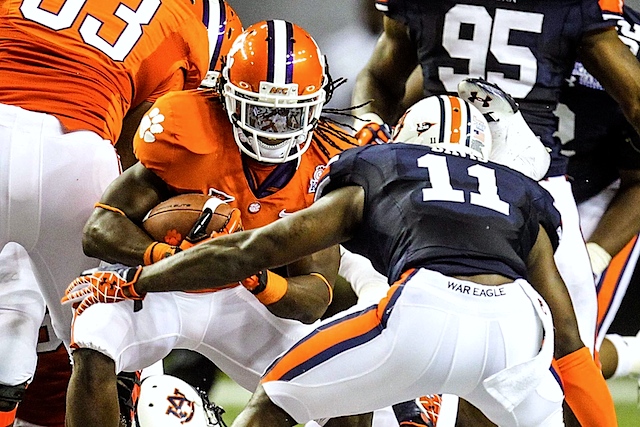 EVOLUTIONARY BIOLOGY • Taylor Martinez, Nebraska.
The general impression of Martinez after two years as Nebraska's starting quarterback was of a glorified tailback whose stated goal of completing 70 percent of his passes this fall seemed… let's say, ambitious, at best: This is the same guy who failed to hit 60 percent in 2010 or 2011, and actually appeared to regress in that span. But not only did Martinez hit his number in Saturday's 49-20 win over Southern Miss: He obliterated it, connecting on 26 of 34 passes (76 percent) for a 349 yards and five touchdowns, both career highs, and a sky-high pass efficiency rating of 211.2. Eleven different 'Husker receivers caught at least one pass, including a different receiver on all five touchdowns.

Ironically, Martinez didn't contribute in any meaningful way to Nebraska's 273-yard afternoon on the ground, finishing with zero yards on five carries. Next week at UCLA will tell us a lot more about whether either extreme is sustainable.

PHYSICS • Andre Ellington, Clemson.
If it's possible for an equation to describe the reality of these two runs in Clemson's 26-19 win over Auburn – much less the odds of them both coming in the same game – it has yet to be written:

But it doesn't take a degree from MIT to figure out that 26 carries + 231 yards from Ellington = Victory for Clemson, even with suspended star Sammy Watkins watching from home. Ellington's number on the ground was a career high and the best in college football for the weekend, and he didn't put it up against Savannah State. 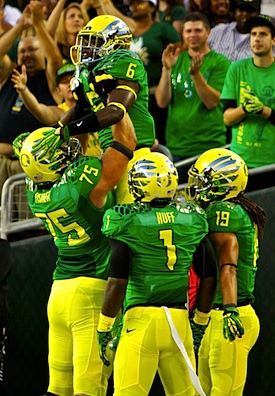 ABSTRACT ART • Oregon's Helmets.
While the rest of college football scrambles to occupy territory the Ducks staked out a decade ago, Nike pushed the genre a little further into the avant garde Saturday with the introduction of a day-glo yellow version of the metallic helmets that debuted in January in the Rose Bowl. Oregon's blowout win over Arkansas State can't quite match the Rose Bowl as an occasion, but as far as the football fashion police are concerned, the latest monstrosities are another hit.

MUNITIONS • West Virginia.
The last time we saw the Mountaineers, they were punctuating their final season in the Big East by hanging 70 points on Clemson in the most lopsided rout in BCS history. Against Marshall, they picked up right where they left off, with every gun in the arsenal blazing: As unit, the offense racked up 655 total yards and scored touchdowns on six of its first seven possessions en route to a 69-34 shellacking. (On the seventh possession, WVU turned the ball over downs inside the Marshall 10-yard-line.) Individually, seven different Mountaineers accounted for at least 50 yards from scrimmage, led by tailback Shawne Alston's 123 yards on the ground and Tavon Austin's 119 as a rusher and receiver.

As usual, though, ground zero for statistical absurdity was senior quarterback Geno Smith, who turned in another gem of a box score: 33-of-37 passing for 340 yards, four touchdowns and zero interceptions, plus a 28-yard gallop into the end zone off a broken play for good measure. Even when the offense didn't work, it worked.

ENGINEERING • La'Veon Bell, Michigan State.
Bell carried the ball an incredible 44 times for 210 yards in the Spartans' 17-13 win over Boise State, and added another 55 yards on six catches, which makes my entire body start to seize up just to type. Then again, anyone who is 6'2", 244 pounds and can somehow still compel his body to do this has been specifically constructed for the task.

CHEMISTRY • Matt Barkley and Marqise Lee, USC.
The powerful bond Barkley and Lee forged over the course of 2011 was only strengthened during the offseason, and reacted violently to exposure to Hawaii's defense: The pair exploded for a 75-yard touchdown connection on the Trojans' first snap of the season. For the game, 10 of Barkley's 23 completions went to Lee, for 191 of his 347 yards passing in a 49-10 massacre.

THERMODYNAMICS • Cordarrelle Patterson, Tennessee.
Tennessee badly needed a spark on offense after limping across the finish line in 2011, and especially after sending the SEC's leading receiver packing just a few days before the opener against N.C. State. They got a quick one Friday night from juco transfer Cordarrelle Patterson, who figured the first one was so easy he might as well go for two:

Patterson finished with 160 yards from scrimmage in his D-I debut, and N.C. State didn't get closer than a touchdown.

DIPLOMACY • Notre Dame and Navy.
It was an ugly game, to say the least, but final score notwithstanding, the "Emerald Isle Classic" in Dublin was an interesting attempt at spreading the game, exchanging cultures, etc., and generally came off without a hitch. Of course, there was a minor international incident, but fortunately it didn't involve anyone on either team.

CATCH OF THE YEAR OF THE WEEK • Devin Smith, Ohio State.
As if you actually had to ask:

That was sophomore to sophomore. Here's guessing the Buckeye game will be slightly improved this fall over 2011.

DeAndre "Nuk" Hopkins, Clemson. Hopkins hauled in a school-record 13 catches against Auburn with Sammy Watkins in absentia, but it took his twisting, go-ahead touchdown catch over Chris Davis in the fourth quarter – while being interfered with – to bring the house down:

Rare and valuable is the receiver whose hands have their own gravitational pull.

Quinshad Davis, North Carolina. It's not the longest, and it didn't go for a touchdown, but the Davis' first catch as a true freshman – an improbable, juggling grab with an Elon defender dragging him to the ground after another has altered the trajectory of the throw – may be as impressive a first catch as anyone has ever made:

Stedman Bailey, West Virginia. And it wouldn't be "Catches of the Year of the Week" without last year's most frequent contributor, already back for more already on his first touchdown grab of the new season against Marshall:

The first, but not the last. I think it's gonna be a fun year, you guys.