The Agony and the Ecstasy: Danger in El Paso, and more of the best photos of Week 1

Share All sharing options for: The Agony and the Ecstasy: Danger in El Paso, and more of the best photos of Week 1 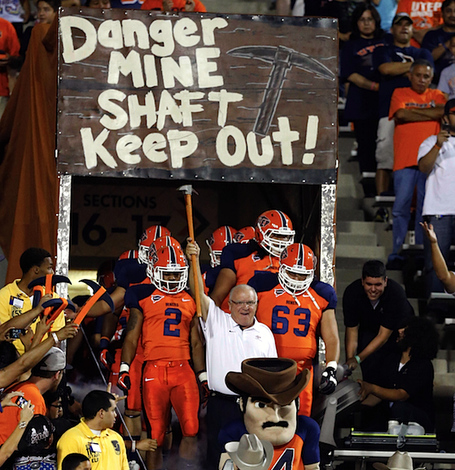 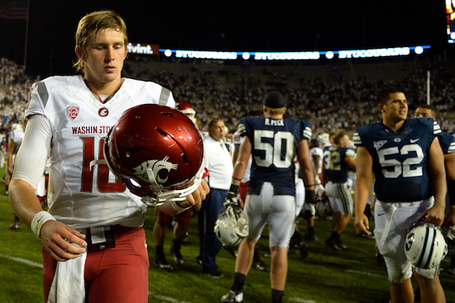 Quarterback Jeff Tuel reconsiders the preseason optimism at Washington State after the Cougars failed to score a touchdown in a 30-6 loss at BYU.
- - - 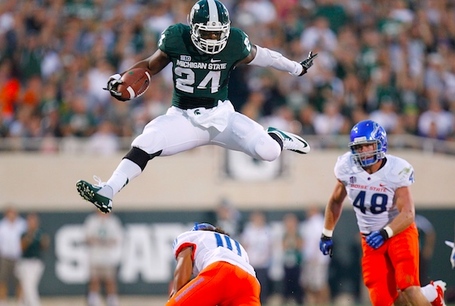 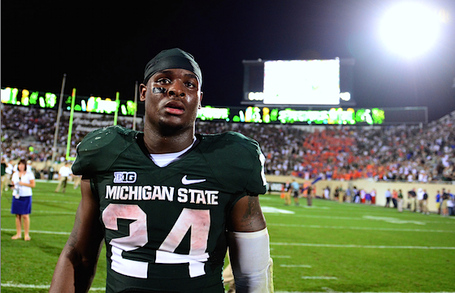 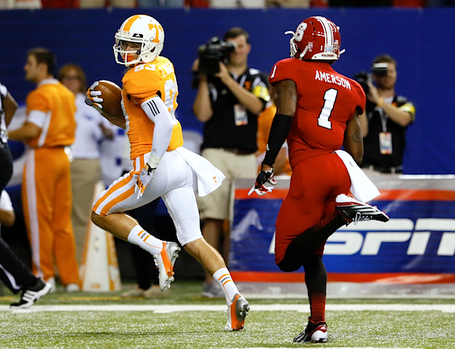 N.C. State's All-American cornerback, David Amerson, gets posterized on a long touchdown pass for the second time in the first quarter of the Wolfpack's 35-21 loss to Tennessee, this time by the unheralded Zach Rogers.
- - - 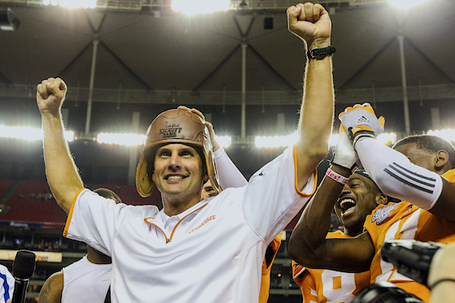 If anyone deserves this photo after the last two-and-a-half years, it's Derek Dooley.
- - - 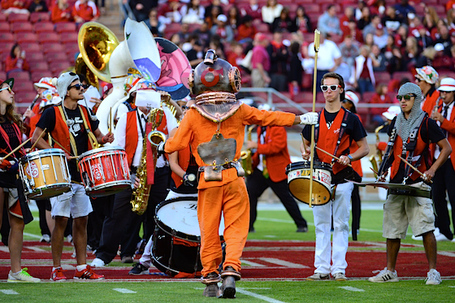 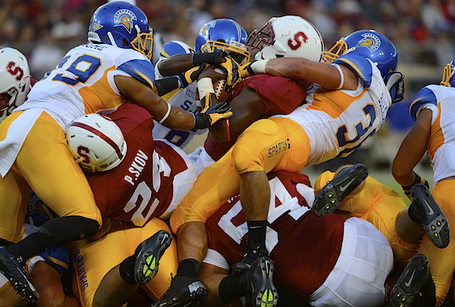 The game went less swimmingly for the Luck-less Cardinal, who were outgained by San Jose State in a 20-17 nailbiter.
- - - 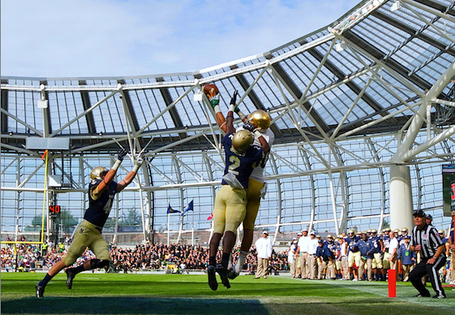 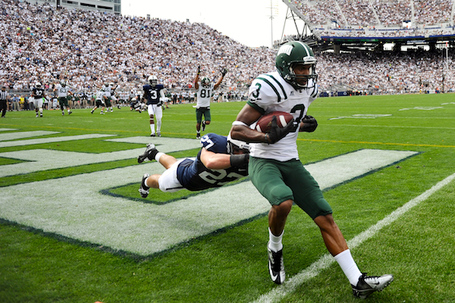 Donte Foster hauls in the clinching touchdown in Ohio U. of Ohio's 24-14 upset at Penn State, arguably the biggest win in the history of Bobcat football.
- - - 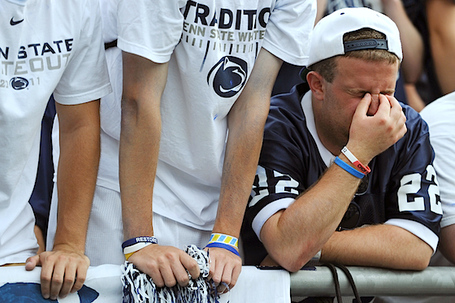 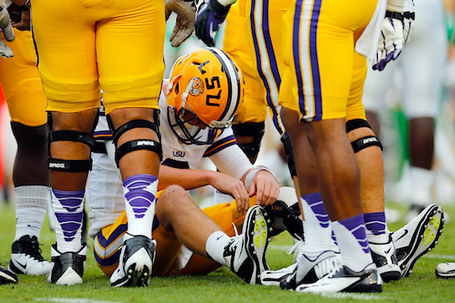 LSU handled North Texas easily, 41-14, but it wasn't a cake walk for quarterback Zach Mettenberger in his first college start.
- - - 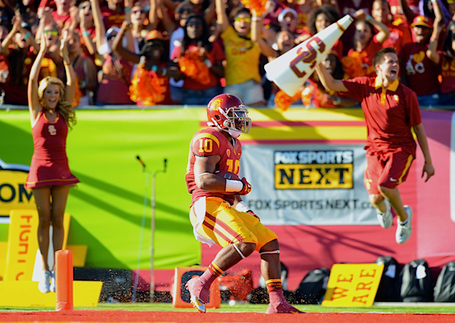 Linebacker Hayes Pullard scores one of USC's seven touchdowns in a 49-10 rout over Hawaii, and don't the kids just love it?
- - - 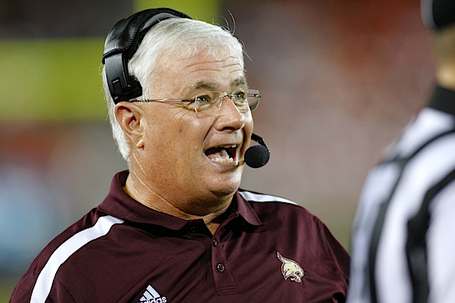 Apparently Texas State coach Dennis Franchione couldn't believe the scoreboard either after his team's 30-13 upset over Houston in its first game as an FBS program.
- - - 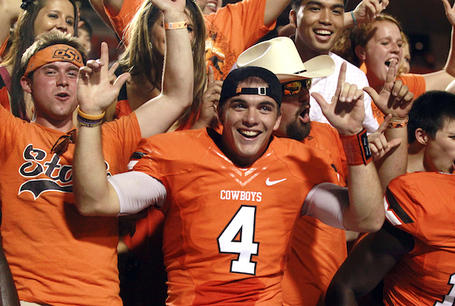 Redshirt freshman quarterback J.W. Walsh luxuriates in a little camaraderie after throwing for two garbage time touchdowns in Oklahoma State's 84-0 incineration of Savannah State. Please, nobody tell him it gets harder.
- - - 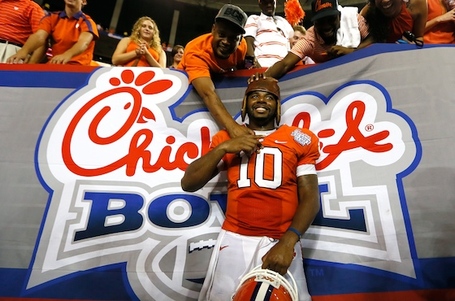 Clemson quarterback Tajh Boyd, on the other hand, knows full well that moments like this one, following a draining, 26-19 win over Auburn, don't come nearly as often.
- - - 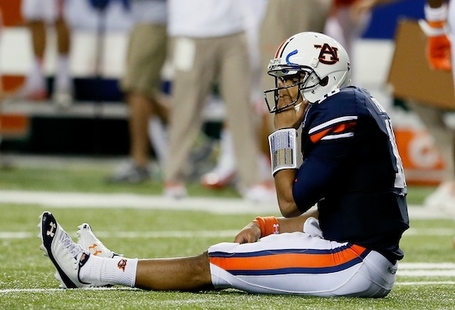 Here's guessing that the time will come eventually for Boyd's Auburn counterpart, Kiehl Frazier. But not Saturday night.
- - - 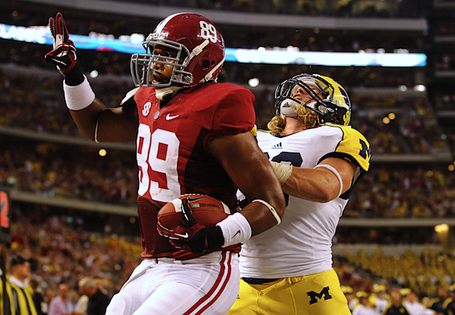 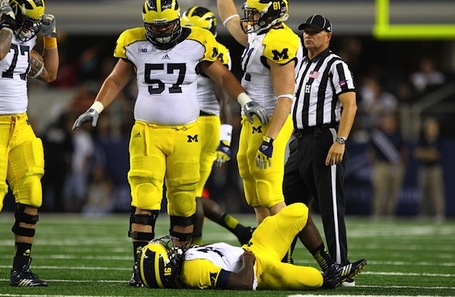 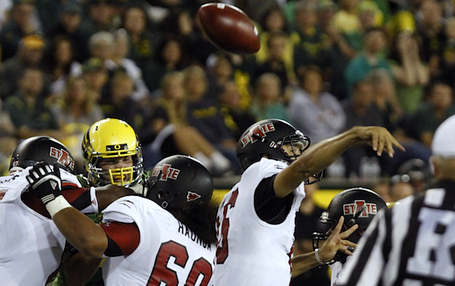 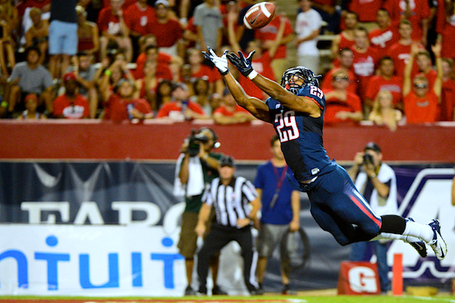 Arizona receiver Austin Hill, pulling some straight-up Willie Mays shit on a 30-yard touchdown reception in the Wildcats' 24-17, overtime win over Toledo. 'Zona racked up 624 yards of total offense in Rich Rodriguez's first game as head coach, but only scored one other touchdown in regulation.
- - -