Meet the new Tide, same as the old Tide

Share All sharing options for: Meet the new Tide, same as the old Tide 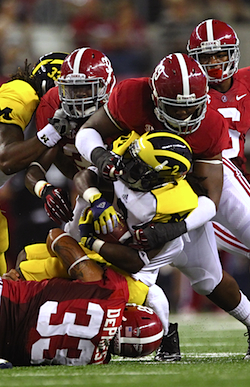 Alabama 41, Michigan 14
- - -
1. You've heard it enough by now, probably, but it's worth emphasizing again tonight that Alabama lost eight players from last year's BCS championship team who were subsequently drafted by the NFL in April, six of them off the defense, four of them in the first round, one of them a finalist for the Heisman Trophy. It returned fewer starters than any other team in the SEC. Both starting cornerbacks are new, both outside linebackers, all the wide receivers. Man-for-man, this is hardly the same lineup consigned to the myths by last year's title run.

Every year, though, it gets a little clearer that thinking about Nick Saban's program in the standard terms of "rebuilding" or individual attrition is missing the point: The program is not a collection of individuals, subject to the unpredictability and inconsistency of mere mortals. It is a machine, a Death Star, and the players who cycle through it are only cogs in its punishing, pitiless pursuit of world domination. They're the best cogs, of course, top-of-the-line, state-of-the-art, blue-chip cogs, but ultimately one will do as well as the next. There is always another cog. And as far as Alabama is concerned, sitting around wondering whether the new cog is going to work as well as the old one makes about as much sense as a hammer factory wondering how its next generation of hammers is going to uphold the time-honored tradition of bludgeoning things.

2. Tonight, it was Michigan's turn to be bludgeoned, in a fashion that the numbers don't quite capture: By any measure, 268 total yards with 14 points and three turnovers is a bad night, especially for a veteran offense with a quarterback as dynamic as Denard Robinson, but that line does more to obscure the Wolverines' overmatched hopelessness than reflect it. In the first place, 40 percent of those yards and 100 percent of the points came courtesy of two long completions after Alabama had raced out to an insurmountable, 31-0 lead in the second quarter. Before Michigan finally got on the board, its first six offensive possessions of the night had produced 24 yards, four punts and two turnovers, and comeback hopes were no longer sanctioned even within the most permissive realms of possibility. Aside from the two scoring "drives" as a result of big plays, only one of Michigan's other ten chances with the ball managed to cross the 50-yard line – and that one only barely, limping to the 'Bama 46 before fizzling in a turnover on downs.

All of which should sound terrifyingly familiar to the rest of the SEC. Only one conference opponent in 2011 (Arkansas) managed to score more than one touchdown against the Crimson Tide defense, and other than LSU in its regular season win in Tuscaloosa in November, no one came within 20 points on the scoreboard. Altogether, as ragged and overwhelmed as they looked, the Wolverines gained more yards and scored as many points against Alabama's defense tonight as any SEC offense in 2011. This is not an "SEC vs. Big Ten" thing. This is Alabama kicking ass across the board.

3. That said, Denard Robinson did not look like a quarterback on the verge of turning the corner as a passer. On one level, it's hard to judge a guy who's being consistently hit and hurried by a defense as relentless as Alabama's, which seems to have an answer for everything on almost every play. But Robinson was well below the Mendoza line tonight in terms of completion percentage (11 of 26), and his two interceptions in the first half were about as ugly – and as costly – as they come.

The first he simply put up for grabs, recklessly lobbing a jump ball in the direction of a receiver who had already been shoved off of his feet and out of bounds by Tide corner Dee Milliner, who found himself all alone to gather in the pick; Eddie Lacy scored three plays, extending 'Bama's lead to 21-0. On the second, Robinson stepped up in the pocket and drilled the ball directly into the chest of linebacker C.J. Mosley, who jogged in for an icing score that pushed the lead to 31-0. In both cases, Robinson had no idea what he was seeing when he put the ball in the air, and seemed more interested in getting rid of it under presssure for the sake of getting rid of, whatever the cost on the other end. Michigan fans have seen that before; all indications tonight are that they'll be seeing it again.

4. Instead, the offensive spotlight was hijacked by Alabama's freshman tailback, T.J. Yeldon, who lived up to the five-star hype and then some with a team-high 136 yards on just 12 touches in his first college game. (Most impressively: A 40-yard run in the second quarter, followed three plays later by a 26-yard reception inside the Michigan 10-yard line, leading to a field goal.) We'll hold off on the Trent Richardson comparisons for now, given that Yeldon is a taller, leaner, more thoroughbred-looking back than his bowling ball-like predecessor, and also given that he's not going to relegate Eddie Lacy to the remainder bin anytime soon. But at 6'2", 210 pounds, the kid obviously has room to grow into another fearsome prototype. 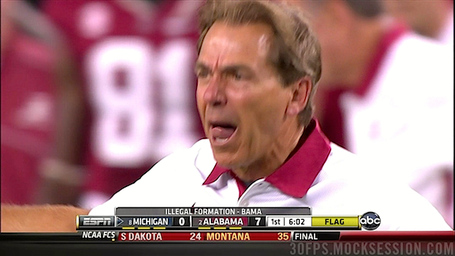 He looks like he's angry over the illegal formation. He's actually quite calm, and merely tasting the air for traces of fear.