Give us some of that old time Denard Robinson religion

Share All sharing options for: Give us some of that old time Denard Robinson religion 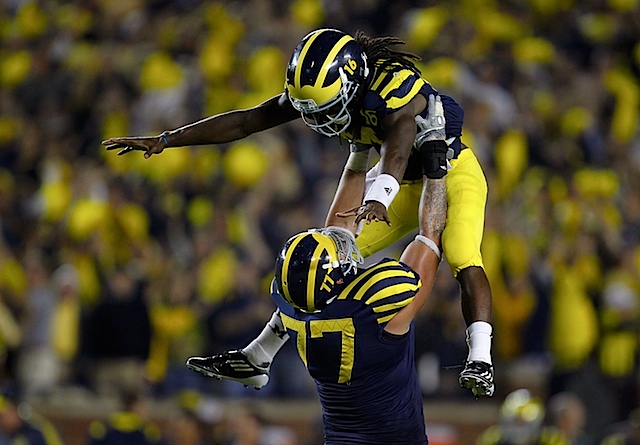 Aside from certain injuries and Colorado's existence, generally, the most depressing moment of the early season is Alabama's crisp, methodical bludgeoning of Michigan on opening night, a lopsided dominance display that confirmed everything we already knew about the Crimson Tide defense as the taker of souls. In this case, the life force the Tide consumed belonged to the most exciting player in the country, Denard Robinson, who was hounded, hit, picked and demoralized by a cold, calculating, perfectly calibrated machine bent on snuffing out any hint of spontaneity or creativity in its path. Pick your synonym: Blowout, rout, trouncing, debacle, shellacking – it was the opposite of a "classic." Mere mortals were not spared.

Each entry in Michigan's ongoing, three-game winning streak against Notre Dame, on the other hand, is the definition of a classic, no less so because none of the teams involved had visions of a national championship dancing in their heads. (Though a couple of them did wind up firing their head coaches.) What those games did have, and still have this weekend for the last time, is Robinson, whose window for turning "exciting" into "great" is closing by the week. For sheer entertainment value against the Irish, there has been no distinction.

Denard Robinson against Notre Dame is the ur-Denard from which all other versions of Denard follow and against whom they are all compared. With the possible exception of the Denard who played a nearly perfect game in the process of snapping a seven-year losing streak against Ohio State last November, the others almost always come up short. Denard against Notre Dame is the original formula. The idol to which thousands of No. 16 jerseys pay homage every weekend, hoping for a mere glimpse of what they got in South Bend in 2010, and under the newly installed lights in Michigan Stadium in 2011 – if not necessarily the best version of Denard, as they saw in the former case, then at least the version who abruptly forgot everything he'd ever been coached in the latter and proceeded to turn the fourth quarter into his own personal PlayStation at the Irish's expense. No player in college football in the last decade has inflicted as much emotional damage on a single rival.

That's essentially a matter of fact: It can be proven statistically, in two of the most prolific box scores in either school's history. It can be proven narratively, in two late, improbable comebacks in the dying seconds, the details of which produce the kind of copy that practically writes itself. It can probably be proven financially, in terms of jersey and ticket sales and the record sums in the swear jars in Catholic kitchens. Since his second start at Notre Dame in 2010, that's the Denard fans have paid to see, and opposing coaches have desperately hoped they don't.

Much more importantly, though, it can be proven emotionally, and even aesthetically. No one but a diehard savant remembers exactly how much time was left last year when Michigan took over for its first of two go-ahead touchdowns in the fourth quarter, or how far the Wolverines had to go; the vast majority of the 110,000 people who were there probably cannot reconstruct the exact sequence of events prior to Robinson's game-winning touchdown pass with two seconds left, or the names of anyone else involved on specific plays. (If they can, they probably won't be able to for long.) They'll forget that the Wolverines' initial surge in the fourth quarter was interrupted by an especially ugly interception that briefly felt like a death knell, along with both of Robinson's earlier picks in the game. They certainly will not remember that Notre Dame's secondary spent the last few drives waving Michigan's receivers into open swathes of turf like dutiful air traffic controllers, and never cared in the first place.

But they will never forget the exhilaration of the clinching pass, or the validation of the seeemingly ad-libbed rally that preceded it, the sheer, physics-defying improbability of it. Whether you were there or watching on television, what sticks is the energy that Denard seemed to singlehandedly inject into the stadium, and especially the certainty in that moment that no one else in college football could have achieved any of it.

His record-breaking numbers in South Bend in 2010 will be written down in the back of a book somewhere. His high-stepping, impromptu Heisman pose on the game-winning touchdown drive and shoelaces flopping in the wind on the longest run in the history of Notre Dame Stadium will be passed down to children.

He only gets one more chance to do that to the Irish, and they only get one more chance to stop him. It's a realistic chance. As another point of fact, I picked Notre Dame to win Saturday, based on a) Its performance last year in Ann Arbor, where the Irish racked up more than 500 total yards, dominated the first three quarters and blew multiple opportunities to put the game away, some of them in hilariously cursed fashion, and b) Its performance last week in a 20-3 win over Michigan State, where the Irish slowly throttled the Spartans into submission in near-Alabaman fashion. If it took the two most thrilling, outrageous efforts of his career to beat Notre Dame the last two years, it may take something better to make it a clean sweep. You don't have to care who wins to hold out a little hope for the privilege.