Life On the Margins: Buckeyes get Bigelow'd (and live to tackle another day)

Share All sharing options for: Life On the Margins: Buckeyes get Bigelow'd (and live to tackle another day)

Obsessing over the statistical anomalies and minutiae of close and closer-than-they-looked games that could have gone the other way.
- - - 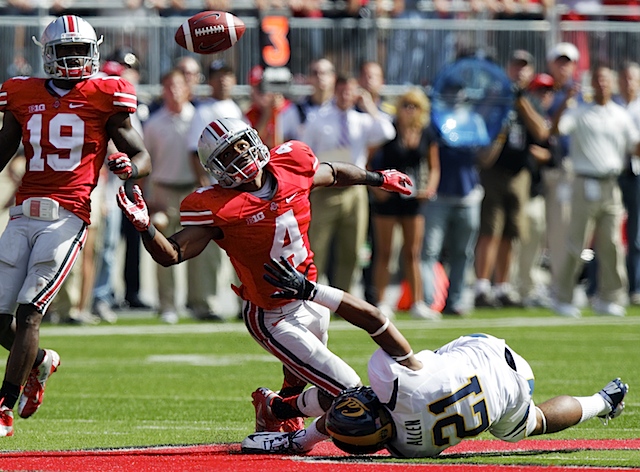 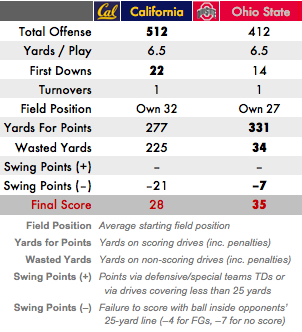 Ohio State 35, California 28
- - -
Not only did the Cal defense essentially give the Buckeyes a free touchdown to win the game: The Cal offense left potential points laying all over the field, their potential tragically unexploited. In the "Swing Points" category, the Bears came away empty on three failed field goal attempts from inside the Ohio State 25-yard line, the third coming with the game tied at 28 in the fourth, just moments before the inexplicable breakdown in the Cal secondary that allowed Braxton Miller's game-winning, 72-yard touchdown pass to Devin Smith. Cal also turned the ball over on downs twice inside the OSU 40-yard line.

In all, that makes five separate opportunities in Buckeye territory that resulted in zero points. Excluding two long touchdowns (which Cal matched; see below), Ohio State's offense only crossed midfield twice – at one point, in fact, OSU went three-and-out on six consecutive possessions in the second and third quarters – but it scored touchdowns both times. The Buckeyes had almost no "wasted" yards at all, which could be interpreted as a sign of efficiency, or of an offense running extremely hot and cold.

As for Cal's big plays: In real time and in the box score, the Golden Bears' edge came via backup tailback Brendan Bigelow, who came out of nowhere for 160 yards and two long touchdowns on just four carries – or, depending on your perspective, via some uncharacteristically matador-worthy tackling that left ex-Buckeye Chris Spielman audibly disgusted in the broadcast booth.

That was the "Break" portion of the afternoon, but the "Bend" exercises were just as troubling. Braxton Miller is the truth, but if that continues in Big Ten play, the zero in the 'L' column will not. 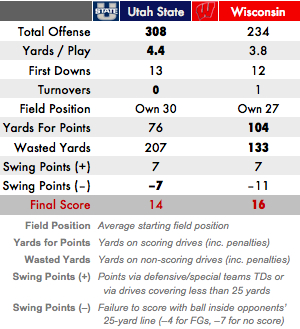 Wisconsin 16, Utah State 14
- - -
Much as I'd love to go on expressing shock and disgust over Wisconsin's demise on a weekly basis, this is the point where we just declare the Badgers' once-awesome offense an active disaster area and move on until further notice. Last week, they were thoroughly dominated across the board by Oregon State, and responded by firing the offensive line coach; Saturday, they were essentially dominated again by Utah State – which, while clearly improved, remains Utah State – leaving the most productive attack in the Big Ten in both 2010 and 2011 sitting dead last in the conference in both yards and points per game.

Of Wisconsin's two touchdowns, one came courtesy of special teams, on an 82-yard punt return by Kenzel Doe in the third quarter. The other came on a short drive that began in USU territory, on the 42-yard line. Starting quarterback Danny O'Brien was 5-of-10 passing 63 yards, and as of this weekend at UTEP, he may not be the starting quarterback anymore.

Not the Utah State offense was on fire here: The Aggies went three-and-out eight times, and their two touchdowns in the first half came courtesy of a) A 39-yard pass on the third play of a 52-yard "drive," and b) A short field following a Wisconsin fumble, the only turnover of the game. In the second half, they went nowhere until the final full possession of the game, which ended with a missed field goal to win from 36 yards out. Neither offense mounted a sustained touchdown drive.

Based on what we've seen so far, at least one half of that equation looks like it's going to hold for the rest of the season, and it's not the half that's going to get Wisconsin back to the Rose Bowl. Or, at this rate, possibly any bowl. 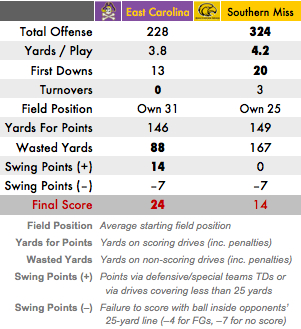 East Carolina 24, Southern Miss 14
- - -
At halftime of this game, I doubt anyone in the stadium thought East Carolina would ever find the end zone again, possibly including East Carolina: The Pirates punted on each of their first seven possessions of the game, five of them three-and-outs, and only managed to get on the board on a 54-yard field goal on the last play of the first half. Meanwhile, after driving 70 yards for a touchdown on its first chance with the ball, Southern Miss was dragged into the punt vortex, booting it away on six consecutive possessions.

The game turned early in the third quarter when USM, still leading 7-3, was stopped on fourth down at the East Carolina 16-yard line, blowing easily its best scoring chance since the opening drive. From there, the Eagles fell apart: ECU immediately mounted its only sustained drive of the game, moving 84 yards for a go-ahead touchdown, and picked up a pair of cheap scores off back-to-back fumbles by Southern Miss' freshman quarterback, Anthony Alford – the first setting a short, 19-yard "drive" that extended the Pirates' lead to 17-7 on an 8-yard run by Shane Carden, the second returned directly for a touchdown by Montese Overton to push the margin to 24-7. USM added another touchdown, to no end whatsoever.

The really bad news for Southern Miss: At 0-2, there's a very real chance it won't pick up its first win until mid-October, at the earliest, put its 18-year streak without a losing/non-winning season in serious jeopardy. This week, the Eagles are slight underdogs at Western Kentucky(!), and will be much larger 'dogs in subsequent weeks against Louisville, Boise State and Central Florida, all favorites to win their respective conferences. The last time USM finished at or below .500 was 1993, before Conference USA or about a third of its current roster existed. Funny how quickly –3 turnover margins can bring all that to a screeching halt.

Honorable Mention: Troy outgained Mississippi State by more than 100 yards in a strong upset bid, despite being significantly outgained by the Bulldogs on a per-play basis. ... Penn State scored 34 points on just 49 plays, thanks to four Navy turnovers. … TCU's 20-6 win over Kansas was far more lopsided than the final score would indicate, thanks to four TCU turnovers with the ball inside the Jayhawks' 25-yard line. … And Western Kentucky upset Kentucky in overtime despite being outgained by 50 yards and finishing –2 in turnover margin.