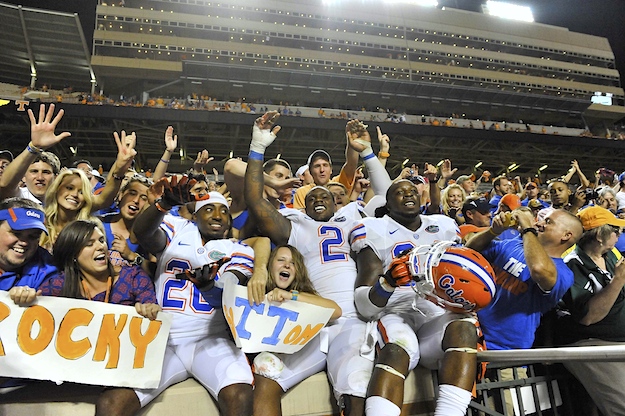 Now in its seventh year, the College Football BlogPoll is a weekly effort of dozens of college football-centric Web sites representing a wide array of schools under the oversight of SB Nation. As always, this is not a power poll.

September rankings are always a "Damned If You Do/Damned If You Don't" proposition. By mid-October or so, resumés are fleshed out, and everybody more or less agrees on what they're looking at and how to assess it. But what exactly are you assessing when a significant chunk of the country has yet to play a meaningful game? What is the criteria?

In the past, I've hewn to a strict resumé approach that might, for example, jump Louisiana-Monroe into the top ten for an early upset over a top-ten team, and let the deck sort itself out over the course of the season. (I once ranked East Carolina No. 1 based on a 2-0 start against Virginia Tech and West Virginia in 2008; the Pirates subsequently finished unranked at 9-5 with a Liberty Bowl loss to Kentucky.) Here, I've tried to split the difference: No, preseason favorites Oregon and Florida State haven't played anyone yet – they get their first real tests this weekend against Arizona and Clemson, respectively – but at least they have devoured the cupcakes they've faced in appropriately effortless fashion. So I will let them hang around the penthouse for awhile. Preseason favorite Oklahoma, on the other hand, has not only played no one of note, but struggled in the process, barely making it out of El Paso alive in an opening night scare against UTEP. So the Sooners have a little ground to make up, beginning with this weekend's visit from Kansas State.

Big movers this week: Stanford, Florida and (sorry) Notre Dame, based on their convincing wins over undefeated USC, Tennessee and Michigan State, respectively, the latter two on the road. If you're ranking individual wins right now, Stanford's upset over USC is No. 1 by a mile; Florida's back-to-back road wins at Texas A&M and Tennessee make for the most impressive combination this side of Alabama's ritual slaughters of Michigan and Arkansas. Et cetera.

I'm not using any kind of formula here, but even I was, I'm not sure there's a way to methodically account for the vast strength-of-schedule divide at this point in the season in a consistent, coherent manner. I am sure that such a method is bound to produce thoroughly useless results. So we'll wing it a little, for now, and gradually implement more rigid comparisons when there's enough information to justify it.

• Show me some skins. I have a lot of respect for the per-capita depth of the Big 12 – any of six teams could realistically win the league, and nine of ten could be in bowl games – but as a whole its non-conference scheduling is for the dogs. Since West Virginia backed out of playing at Florida State, the only notable opponents on any Big 12 schedule through the first three weeks have been Arizona (a loss for Oklahoma State), Miami (a win for Kansas State) and Iowa (a rivalry win for Iowa State), and that's assuming Miami and Iowa turn out to be marginally better than, say, Ole Miss, which served as a Conference USA-caliber patsy Saturday for Texas. Oklahoma still has Notre Dame on the menu later in the year, but generally there's no value in that league until its members turn the guns on each other.

• Let them have their day. The last five teams in this week – Northwestern, Louisville, Oregon State, Iowa State and Rutgers – are all "What the hell?" picks for middling outfits that most likely will not be boasting poll-worthy resumés a few weeks from now. That's OK: For the moment, Northwestern looks as likely as anyone to claim the Big Ten's ticket to the Rose Bowl, Oregon State can still pretend beating Wisconsin is an impressive feather in its cap, Iowa State can revel in back-to-back wins over Iowa and Louisville and Rutgers can both stake their claim as the class of the Big East.

• 2 + 2 = 'Bama. The only other thing I have to say for mathematical or formulaic voting is this: If your formula produced a team other than Alabama at No. 1 this week, your formula sucks.