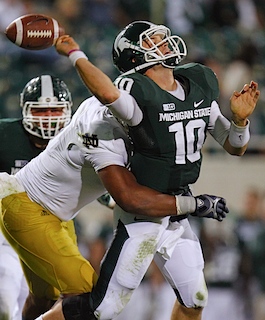 • B1G Trouble. Notre Dame beat Michigan State Saturday night in East Lansing – throttled the Spartans, actually, 20-3 – thereby leaving exactly zero Big Ten teams in the top 15 of either major poll and bringing us to our semiannual Big Ten Crisis Watch. With the Spartans' loss, the conference currently boasts three teams with perfect records intact through three weeks, before a single intra-conference game: Minnesota, Northwestern and Ohio State. Eight of the remaining nine teams (all except Indiana, a first-time loser Saturday against Ball State) have gone down at the ostensibly worthy hands of an opponent from one of the other major leagues:

Do the math: Outside of Northwestern's 3-0 run in the Smartypants Series, Big Ten teams are 1-8 against their peer group, before accounting for other marks of shame like Minnesota's overtime escape from UNLV, Wisconsin's ongoing struggles with the likes of Northern Iowa and Utah State (see below) and Penn State's loss to Ohio U. of Ohio. Even the apparent bellwether, Ohio State – setting aside the fact that the apparent bellwether is coming off a 6-7 record in 2011 and is ineligible for the conference championship under a first-year coach – legitimately struggled Saturday to put away Cal at home. That still stands along with Michigan State's win over Boise State as the most valuable non-conference skins on Jim Delany's wall, and unless Michigan delivers another dagger to Notre Dame's fragile psyche next week in South Bend, it will have to hold up until the bowl season. Who's looking forward to that?

• When is it safe to trust Notre Dame? Certainly not before the Irish exorcise a few lingering demons against their annual September tormenters from across the state line in Ann Arbor, who have taken three straight in the series courtesy of increasingly dramatic comebacks in the final minute. Another heartbreaker against the Wolverines, against a schedule that still includes Miami, Stanford, BYU, Oklahoma, Pittsburgh and USC, and all bets are off for the rest of the season.

That said, almost everything about the win in East Lansing was encouraging: Everett Golson played the whole way at quarterback, the running game was existent against arguably the best run defense Notre Dame will face and the Irish's own banged-up defense kept Michigan State out of the end zone entirely. Based on the Spartans' ranking coming into the game, it was ND's first top-10 win since early 2005, in Charlie Weis' second game as head coach. The Irish are 3-0 for the first time in a decade. For a less perennially overhyped team, against a less murderous schedule, I might be booking seats on the bandwagon. For this team, against this schedule, I'd only advise continued patience. 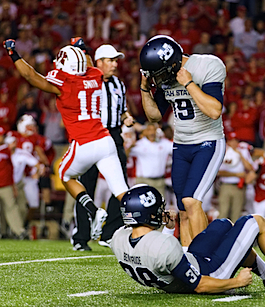 • Boilermakers vs. Wildcats for all the Barbasol! Miraculously, Wisconsin did not lose to Utah State despite trailing by double digits at the half, which counts for a lot more as far as the Badgers than anyone could have possibly guessed three weeks ago. Last year, the Badgers rolled through a nougaty non-conference slate by an average margin of 40 points per game, accurately foreshadowing their run to a second consecutive Rose Bowl; approaching the same point in 2012, they've already been pushed to the limit by an FCS patsy (Northern Iowa), pantsed on national television at Oregon State and now pushed to the limit again by Utah State, which is a dramatically improved program over the last two years but remains Utah State. Would-be Heisman hero Montee Ball is averaging 3.8 yards per carry, down from 6.3 in 2011; the offense as a whole ranks dead last in the conference in yards and points per game, again, running mostly against nougat.

Given that both Ohio State and Penn State were barred from representing the Leaders Division in the Big Ten Championship Game, the natural preseason assumption was that even a greatly diminished Wisconsin outfit that was but a mere shadow of its championship predecessors would still be good enough to fill that niche. At this point, though, there is absolutely no evidence that the Badgers have a better bead on the title game than Illinois or Purdue. And that is not an attempt to vouch for Illinois or Purdue.

• Texas has an offense. (Or does it?) Texas dropped a 676-yard, 66-point bomb on Oxford, Miss., Saturday night, obliterating Ole Miss equally by ground (350 yards rushing) and air (326 passing) in an explosive manifesto for the rest of the Big 12 with conference play on the horizon. After punting on its opening possession, the Longhorns scored on ten of their next eleven chances with the ball, the only exception coming on a missed field goal in the third quarter. More importantly, sophomore quarterback David Ash didn't commit a turnover, and still hasn't thrown an interception this season after losing the starting job amid a flurry of giveaways last year as a true freshman. His pass efficiency rating against Ole Miss was an absurd 259.1.

But how good is Ole Miss? Hugh Freeze is still in the midst of the standard honeymoon period afforded to all new head coaches, and he's going to need it: The Rebels looked as hopelessly outmanned as ever against actual competition, indistinguishable from the units that finished dead last in the SEC in total and scoring defense each of the last two years. Until further notice, we're still grading the Longhorns' leap on a curve.

• Rage Against the Marine. I don't really know what else to do with this, but Defiantly Angry Ole Miss Marine…

…I really have no choice but to salute you.

• Florida State has an offense. (Or does it?) The same asterisk that goes next to Texas' big night also applies to Florida State's 612-yard, 52-point outburst against Wake Forest, which could have easily been much, much worse if FSU had kept the throttle down in the second half. (Tailback Chris Thompson didn't touch the ball at all after racking up 197 yards on just nine carries in the first half, most of them coming on back-to-back touchdown runs covering 75 and 80 yards, respectively, in the second quarter.) Unlike, say, Ole Miss, Wake Forest has not been a notable bastion of defensive suck over the past few years. But we still don't know what we don't know: Until we see the notoriously fickle 'Noles put the pieces together over multiple games against something better than token resistance – against Clemson, for example, next weekend – the jury is out, and frankly still waiting for the other shoe to drop.

• A prayer for Colorado. If there was any doubt that Colorado is the worst team in major college football, let it now subside. In the span of one extraordinarily, historically awful half of football, the Buffaloes allowed 55 points on 512 yards of total offense to Fresno State, which had twice as many touchdowns (8) at halftime as Colorado had first downs (4) en route to a 69-14 humiliation that threatened to redefine the term.

In the first quarter alone, Fresno broke free for a pair of 90-plus-yard touchdowns on consecutive snaps, the first coming on a 97-yard pass from Derek Carr to Isaiah Burse, followed shortly by a 94-yard sprint by Robbie Rouse that made him the school's career rushing leader. That also happened to be Rouse's fourth touchdown run of the quarter. The first quarter.

Jon Embree was not immediately fired after the game. But with this debacle and demoralizing losses to both Colorado State and Sacramento State already on the books, CU is well on its way to 0-12. It's on the fast track.

I'm not sure I can explain that entire sequence of events, or even that I want to, considering that the idea of Utah's entire student body repeatedly storming the field at random is more fun than trying to place it into a coherent context. Frankly, the only reason I bring it up is to point that whoever made this:

Oh, and if it wasn't clear: Utah won the game. As if it matters.