Stanford slays yet another Trojan Horse

Share All sharing options for: Stanford slays yet another Trojan Horse 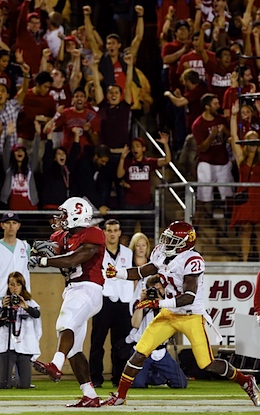 Stanford 21, USC 14
- - -
1. Of all the possible ways we imagined USC might get the axe this season, with this lineup, this scenario wasn't really on the list, was it? If anything, the Trojans were destined for death by shootout, just like last year at Stanford, and the year before that. Except Stanford doesn't have that kind of firepower anymore, right? The Cardinal are doing the "rebuilding" thing. So what are they going to do, just line up and suddenly stop the most talented, star-studded offense in college football?

Well, yeah, as it turns out, that was pretty much the gist of it. No smoke and mirrors necessary. USC's viking quarterback, Matt Barkley, completed fewer than half his passes, didn't throw a touchdown and was picked off twice. Output in terms of both total yards (280) and points was the worst in any game Barkley has finished since his freshman season. After going ahead 14-0 in the second quarter, the Trojans' final nine offensive possessions resulted in three giveaways, four three-and-outs and two turnovers on downs. Stanford's defense just lined up and beat USC's offense, full stop.

2. On that note, Fox's broadcasting team did surprisingly stellar work focusing on USC's ongoing, nearly crippling issues at center in the fourth quarter, by which point backup Cyrus Hobbi had made a hash of every facet of the position in place of injured All-American Khaled Holmes. The most persistent problems stemmed from Hobbi's inability to hold up against the Stanford rush, which led directly to the others: Awkward exchanges with Barkley, tangled feet as Barkley began his drops, a key holding penalty from which the Trojans never recovered on their final, failed drive to tie at the end of the game. It was certainly as compelling a case as you'll ever see for a center as MVP of one of the most prolific offenses in the country.

But Hobbi only got the worst of it, or so it seemed when the spotlight was on him, when it could have fallen just as easily – and harshly – on almost anyone else on the offense. The running game earned all of 26 yards on 28 carries, including a 30-yard gain on a single play; ballyhooed Penn State transfer Silas Redd averaged 1.3 per carry with a long gain of eight. Barkley, the most well-protected quarterback in college football in 2011, was sacked six times, twice on the final drive. As badly as he missed Holmes tonight, Barkley also misses his left tackle, departed first-rounder Matt Kalil. In every sense, Stanford's defensive line controlled USC's offensive line, and everyone in the stadium and watching at home knew it.

3. Somewhat less surprisingly, Stanford's offensive line dominated to about the same extent on the other side, against an injury-ravaged front that lived down to all of the projections that pegged the defensive line as the weakest point on the team. Already, senior defensive end Devon Kennard is effectively out for the season; the other starting defensive end, Wes Horton, came off the bench after suffering an injury of his own last week against Syracuse. In his place, the Trojans slid tackle George Uko to outside to end. The rest of the rotation consisted of a junior college transfer (Morgan Breslin), and a true freshman (Leonard Williams) on either side of a pair of second-year guys (redshirt freshmen Christian Heyward and Antwaun Woods) still known mainly for their recruiting rankings.

And that's it: USC played just six defensive linemen all night long, a glaring symptom of depth-crushing scholarship restrictions. Into that breach the Cardinal sent their alarmingly consistent, All-Pac-12 tailback, Stepfan Taylor, who came out the other side with 213 total yards on 32 touches, two long touchdowns and a big chunk of clock time in which Barkley and Co. were on the bench. In the second half, Stanford held the ball for more than 19 minutes to the Trojans' eleven.

4. This is Matt Barkley after the game: 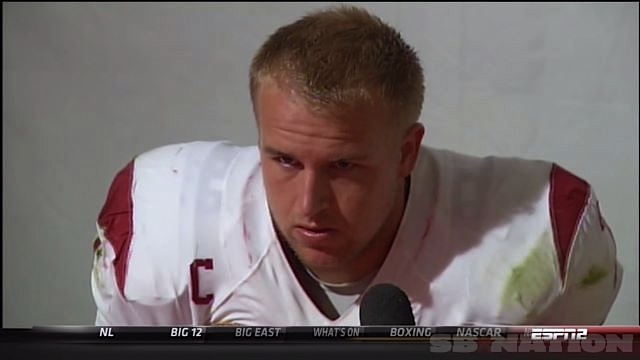 Losses by teams in USC's lofty position (and players in Barkley's) always come with some degree of hyperbole over the goals and opportunities that are no longer attainable, and sometimes they're right. But seasons don't turn into smoldering funeral pyres in mid-September: If it proceeds accordingly, USC is still very much alive to win the Pac-12 championship, Barkley can still win every trophy in existence and, depending on how the chips fall elsewhere, it's not hard to imagine a scenario in which the Trojans are not only still eligible for the BCS Championship Game, but may still control their own destiny. It is very early. Everything is still in front of them.

But that doesn't really account for why Barkley was borderline catatonic in his press conference, offering curt, barely audible answers with no discernible emotion rather than tears or anger or some overly emotional speech. In the big picture, Barkley is still defined overwhelmingly by what he hasn't won: When he decided last December to pass on millions in the draft for another year at school, it was specifically with the purpose of restoring USC to the irresistible force of a program he inherited from his blue-chip predecessors at the . All of them won conference championships; all of them won BCS bowl games. Two of them won a Heisman Trophy. One of them won a national championship.

Barkley? He will now finish his career 0-4 against Stanford. He was just picked off twice in his worst performance since his freshman year. It's not only that his and his team's ascendence among the heroic USC dynasties has been postponed. With so many glaring problems coming together in the loss, and such a drastically reduced margin of error as a result, it's that the coronation may never come.