Florida's annual September rebirth is right on schedule, with an extra dollop of optimism

Share All sharing options for: Florida's annual September rebirth is right on schedule, with an extra dollop of optimism 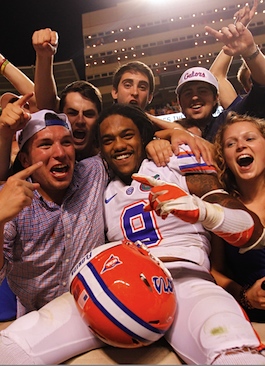 Florida 37, Tennessee 20
- - -
1. So Florida… has, like, an offense now? Not to get too far ahead of ourselves here, but basically, yeah. I think so. Mainly because the Gators can actually run the ball for a change.

In the first place, the output tonight – 38 points of 555 yards of total offense, with three second half scoring drives covering at least 70 yards – is well beyond the wildest hopes and dreams of the 2010 and 2011 offenses unless the defense in question belongs to UAB or Appalachian State. The vast majority of that against Tennessee (336 yards) came on the ground, thanks in no small part to the reemergence of a viable running threat at quarterback: Starter Jeff Driskel and Wildcat interloper Trey Burton (see below) combined to run for 172 yards on just eleven carries out of the shotgun, a stat line that could have tempted Tim Tebow to quote the Quran on his eyeblack. More importantly, though, because it's more sustainable, there's fan favorite Mike Gillislee, who went for 115 on 6.4 yards per carry tonight, including a pair of long, dagger-wielding runs that set up touchdowns in the fourth quarter – all despite coming off the bench with a groin injury.

Through three games, Gillislee has generally looked like an All-SEC star-in-waiting, except than his case he's been waiting patiently for the better part of two years. Which just goes to prove that coaches should always, always listen to fans when it comes to key personnel.

2. Given a little time in just his second career start, Driskel was lightyears ahead of his rough-and-tumble initiation last week at Texas A&M, especially in the second half: After the break, he completed 8 of 10 passes with three going for at least 20 yards, including a pair of touchdown passes. Better yet, he wasn't sacked (A&M got to him six times) and didn't commit a turnover for the second week in a row.

Not that Florida fans haven't seen an overhyped September win over an overhyped Tennessee outfit turn pedestrian players into shooting stars before, until reality sets in come October. (See Brantley, John.) But vital signs are very good offensively, much more so than at this stage the last two years, even if the sluggish first half indicates they're still not as good as everyone's going to act like they are when LSU comes up again on Oct. 6.

3. Speaking of shooting September stars: We have a Trey Burton sighting.

That was Burton's second touchdown run of the night, on top of a 32-yard reception that set up a field goal, making this easily his best night since the way premature "Next Tebow?" hype foisted on him after just a few games as a true freshman, and his best performance in general since he appeared in that one video with the chick with the oversized… uh, emphasis on professionalism. Last year, Burton was MIA, finishing with 274 yards on 56 touches for the entire season, with zero touchdowns in the last nine games; in the first two games this year, he only touched it six times for 30 yards. Tonight: Five touches for 129 yards, two touchdowns.

It's been true since he stepped on campus: When it finds a viable role for Trey Burton, this offense works. For now, the Wildcat is looking pretty viable. For now.

4. As for Tennessee… well, Tennessee is the team we thought it was all offseason. The running game is virtually non-existent; quarterback Tyler Bray is good for a handful of big plays per game, and a handful of crippling mistakes; like their temperamental quarterback, the receivers will show flashes of their immense talent and spend the rest of the night lobbying in vain for pass interference calls. Bray still does not respond very well to pressure – both interceptions tonight were the result of an unusual rush scheme that put a man in his face – and no longer has the excuse of a green-as-grass offensive line; the current line has grown up with Bray and now boasts more career starts than any other front in the conference. Until it can force a decent defense to take in interest in something other than pinning its ears back in pursuit of Bray, though, that long-awaited corner is never going to get turned.

5. God bless him, exasperated Derek Dooley is my favorite Dooley:

Somebody give that man a hug, and tell him a contract extension isn't everything.