Share All sharing options for: Alabama buries another victim, vows to kill again 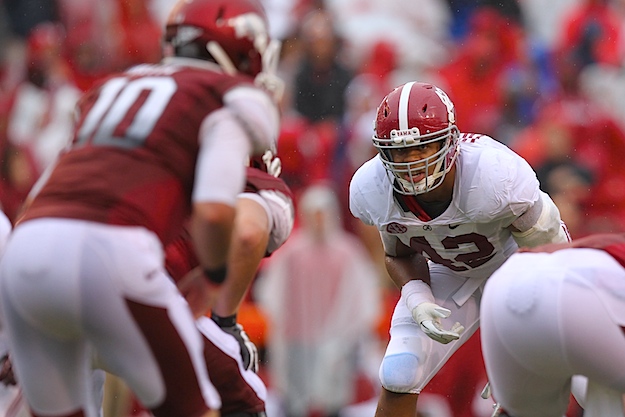 Alabama 52, Arkansas 0
- - -
1. You know pretty much the worst thing you can do as a three-touchdown underdog, facing the No. 1 team in the nation, with your own starting quarterback on ice for the entire game? Survey says: Yep, immediately snapping the ball over your punter's head within the first five minutes is the answer we were looking for. It finished just ahead of filling the smoke machine during player intros with pepper spray.

Arkansas committed the cardinal gaffe on its second series of the game, Alabama stampeded into the end zone from six yards out on the next play and the competitive portion of today's proceedings was over.

2. The gloomy weather made for an appropriately funereal environment. As usual, Alabama is so consistent in its dominance that it's difficult to find anything new to add to the standard "Alabama is Alabama" response, except that in today's massacre it was only more so. Pick a stat, any stat.

Total yards: Alabama 438, Arkansas 137. Turnovers: Alabama zero, Arkansas five, plus the early punt gaffe. Third downs: Alabama converted 55 percent, Arkansas 21 percent. Yards per carry: Alabama averaged 5.0, Arkansas averaged 1.6. The 52-point margin of victory was the Crimson Tide's largest in an SEC game in Nick Saban's six-year tenure. It was Arkansas' widest margin of defeat since another top-ranked juggernaut, USC, incinerated the Razorbacks by a final of 70-13 in 2005. It was Alabama's second consecutive shutout against an SEC opponent (hi, LSU!), and its third straight SEC game in which it held the opposing team without an offensive touchdown. Since last year's win over Arkansas in Tuscaloosa, SEC offenses have scored three touchdowns against Alabama's defense in 36 quarters.

3. The Crimson Tide could have literally won this game taking knees over the final 54 minutes, so it's difficult to assess the offense at as anything beyond "efficient" when it spends so much time at half-throttle. A.J. McCarron: 11-of-16, 189 yards, 1 touchdown, no interceptions. Efficient. The running game: Six touchdowns by four different backs, three of whom had at least 50 yards on the ground but none of whom had sixty. Efficient. The Tide offense took over five times with the ball in Arkansas territory, and scored touchdowns all five times. Efficient, efficient, efficient.

It also remains stupefyingly boring and more than a little macabre for anyone outside of the "Rammer Jammer" demographic, though I still get the feeling McCarron could put up some sufficiently gaudy numbers with this group of receivers if given half a chance. But who wants to see that when you can watch the sporting equivalent of a guy getting bludgeoned to death with a bag of nickels?

Please do not fire this man.

5. Immediately after the game, Twitter was positively abuzz with a report from a freelance journalist at the game, Ray Glier, that Tyler Wilson "marched into" the post-game press conference and "called some of his teammates quitters" before promptly walking out. Other than Glier's use of the word "quitter," that was a technically accurate description, although like many non-contextual facts, it was not exactly honest:

"I'll start with the football game. Obviously, it was very pretty to watch. It wasn't pretty for me to sit on the sideline and watch as a player. It sucks I can't be out there to do anything about it. Do I feel that we, at times, gave up out there? Yeah, absolutely. As a leader, it sucks to see people not do their jobs and things go wrong. There's been a lot of things gone that way. As a leader, at this point, you've got to look forward. And there's been a lot of people jump off the bandwagon and it's my responsibility as a leader to keep everybody in this organization, in this team, in that locker room together. And I'm going to make sure of it going forward. We've got a big game against Rutgers next week. I'm going to do everything in my power to be a part of it and be the starting quarterback and run out there on the field and get a win. You've got to start with one before you can get the rest of them. But I give you my word I'm going to do the best in my ability and the best in my power to make that happen. That's all I've got."

That's Wilson's full statement, taking up a little more than a minute. (Minus the part where he thanks his sponsors, because Wilson's public speaking style is a dead ringer for a NASCAR driver's.) So there you go: A frustrated senior quarterback takes personal responsibility for his team's lapses in composure and/or effort against a clearly superior opponent, and gets portrayed as some kind of divisive prima donna. Hope that brief spurt of attention was worth it.