Pitt flips the script on its dismal season, and Virginia Tech's

Share All sharing options for: Pitt flips the script on its dismal season, and Virginia Tech's 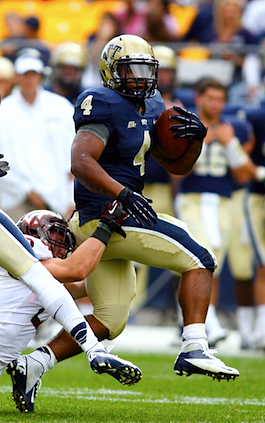 Pittsburgh 35, Virginia Tech 17
- - -
1. Last week, I wrote that Pitt is staring into the gaping maw of despair after lopsided losses at the hands of Youngstown State and Cincinnati. So what does that say about Virginia Tech? The Hokies committed four turnovers, were outgained by more than 200 yards and were literally run over by a true freshman tailback making his first start. And it was the defense that was supposed to carry them to another ACC title.

None of which bears any resemblance to anything we'd seen from either team over the first two weeks of the season, or much of anything we've seen from Virginia Tech historically; 537 yards is the most a Hokie defense has allowed in a single game since September 2007 against LSU, and LSU went on to win the national championship. Now, it could very well be that embattled Pitt quarterback Tino Sunseri turned a corner today, or that said freshman tailback, Rushel Shell, will go on to live up to the hype and supplant the reigning star in the backfield, Ray Graham. Or it could be, after eight consecutive seasons with at least 10 wins and four conference titles in the same span, that the reigning ACC overlord is in for a much longer, rockier road than it's traveled in a very long time.

2. The Logan Thomas bandwagon, already sputtering after an erratic night at Georgia Tech, just lost a wheel and careened off the side of a bridge. Whatever his other faults against the Yellow Jackets, at least there Thomas took care of the ball; here, he was not just erratic (14 of 31 passing) but downright self-destructive, serving up three interceptions to a defense last seen being ripped to ribbons by a converted wide receiver named "Munchie." Thomas' picks did not lead directly to Pitt points – all three came on the Panthers' side of the field – but even draftniks enamored with his size and potential can't go on projecting this guy as a likely first-round pick after this. Yes, he is an extremely huge, gifted individual who needs more polish, experience and consistency, which is another way of saying he needs to develop into a better quarterback.

3. That said, Thomas was on an island thanks to both his defense and his supporting cast in the running game, which was every bit as bad as all those previews noting the glaring lack of experienced linemen or running backs suggested. Between them, the top three tailbacks today – Michael Holmes, Martin Scales and J.C. Coleman – combined for 22 yards rushing on 17 carries, with almost half of those yards coming on a single 10-yard gain by Scales. After managing just two touchdowns against Georgia Tech, the Hokie offense found the end zone exactly once today, and it might as well have been waiting for lightning to strike:

Tech's only other touchdown came courtesy of a 94-yard punt return. Again: Against a defense that allowed over 30 points apiece to Youngstown State and Cincinnati. That is not tenable.

I'll have what he's having? On second thought, maybe not.

5. How bad is the ACC's Coastal Division? Three weeks into the season, there are no undefeated teams remaining and arguably the three most talented teams in the division – Miami, North Carolina and Virginia Tech – have been blown out in consecutive weeks by Kansas State, Louisville and now Pitt. (Duke was also throttled last week by Stanford.) The only wins to date by a Coastal outfit over another FBS program from outside of the conference are victories over Florida International (Duke) and Penn State (Virginia). So… good luck with Florida State or Clemson in the championship game.