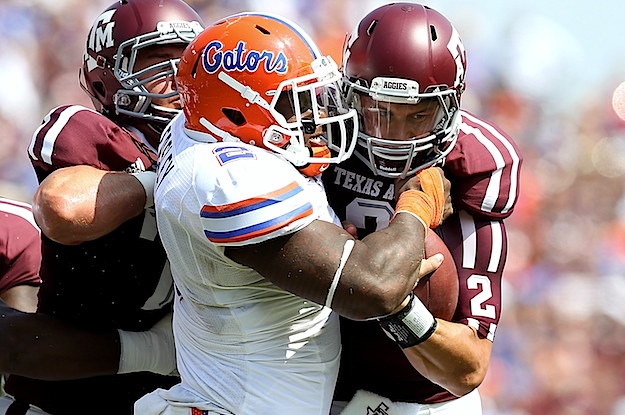 •DOMINIQUE EASLEY and LERENTEE McCRAY, DEs, Florida.
Florida cannot hope to match Tennessee's firepower on offense: The Volunteers lead the SEC in passing yards and scoring, where the Gators rank at or near the bottom of the conference on both counts and don't trust sophomore quarterback Jeff Driskel enough to take the reins off. But Florida's front four can give the secondary a chance against the Vols' first-rate deep threats, Justin Hunter and Cordarrelle Patterson, by keeping the heat on quarterback Tyler Bray. Last week, the pass rush wreaked havoc at Texas A&M, eventually racking up three sacks on elusive Aggie QB Johnny Manziel, whose fresh legs allowed him to escape more hits that the statuesque Bray will not.

As important as the pressure itself was the fact that Florida was able to get it largely with only a four-man rush against A&M's touted offensive line – on one occasion, McCray simply blew right past a likely first-rounder, Luke Joeckel, and chased down Manziel from behind – without resorting to blitzes that took linebackers and safeties out of pass coverage. When the Gators did bring rushers from the second level, it was often on zone blitzes that managed to get to the quarterback while still dropping seven. Regardless of the numbers, though, if Bray has time to throw, the secondary is going to find itself on the wrong end of a shooting gallery. And if the scoring gets out of the teens, the Florida offense is going to have a hard time keeping up. 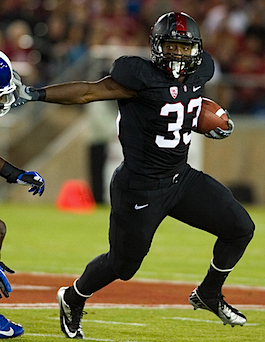 •STEPFAN TAYLOR, RB, Stanford.
On the same note, Stanford cannot boast anything like USC's combination of Marqise Lee and Robert Woods at wide receiver, much less the Trojans' platonic Aryan quarterback, Matt Barkley. But the Cardinal can run the ball, and it's not certain at all that USC can stop it: The defensive line remains by far the greenest group on the team, and the linebackers are all undersized relative to Stanford's hulking offensive line. Taylor already averages 20 carries per game, and carried 23 times in last year's triple-overtime win in the L.A. Coliseum, when Andrew Luck was still the quarterback. Assuming the top priority this time is chewing up as much time as possible to limit Barkley and Co's opportunities with the ball, Taylor's number tonight could easily hit thirty.

•CIERRE WOOD, RB, Notre Dame.
So much for emphasizing the run: After plowing over, through and around Navy in the opener, Notre Dame netted just 52 yards rushing on 36 carries last week against Purdue, instead relying mainly on redshirt freshman Everett Golson's arm (21-of-31, 289 yards, 1 TD) in a 20-17 escape in South Bend that was anything but a display of smash-mouth dominance in the trenches. This week, the Irish get back last year's top rusher, Wood, from a two-game suspension just in time for a trip to Michigan State, which has smothered opposing ground games from Boise State and Central Michigan. If Wood can't make a dent in the Spartan D, the dream of "balance" is pretty much dead.

•BRADLEY ROBY, CB, Ohio State.
Roby, just a sophomore, has drawn the unenviable assignment of matching up with California wide receiver/future first-rounder Keenan Allen, who is not only Cal's only above-the-fold offensive threat, but is probably the most dangerous player Ohio State will defend all year. The Golden Bears have no chance at all of matching OSU's production under Braxton Miller without a big play or two in Allen's direction, even if it is the significantly less inspiring arm of quarterback Zach Maynard that's required to deliver them.

•BYRAN JONES, DT, Arkansas.
Arkansas is without its starting quarterback and its sense of purpose in the wake of last week's stunning flop against Louisiana-Monroe, and now faces a top-ranked, irresistible Alabama outfit that specializes in slowly, painfully snuffing out both opponents' and viewers' will to live. If the Razorbacks have any hope of keeping it respectable at home, it starts with the 315-pound Jones' ability to hold his own against the best offensive line in college football and make the Crimson Tide's deep stable of tailbacks work for every yard it gets between the tackles. Good luck with that for four quarters, dawg.