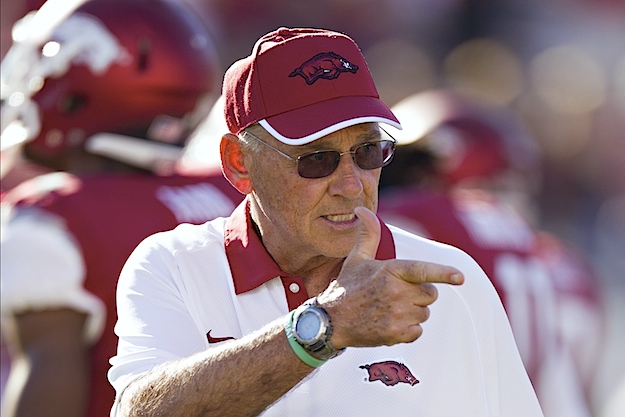 • Surprising coaches and teammates, California wide receiver Keenan Allen will quietly complete requirements for his bachelor's degree during the first quarter, formally graduate in the second quarter and receive an NCAA waiver to transfer to Ohio State at halftime of the Bears' eventual loss in Columbus. "Coach [Urban] Meyer called me this week and said he liked what he saw on film and the plan kind of took care of itself," Allen will say after catching two touchdown passes against his now-former team in the second half. "He's really very persuasive."
- - -
Ohio State 37, California 17

• One week after missing four of five field goals in last week's 17-16 loss at Virginia, including the potential game-winner as time expired, Penn State kicker Sam Ficken will connect on all five attempts against Navy, supplying the winning margin in the Nittany Lions' first victory of the year. "We were pretty relieved," PSU coach Bill O'Brien will say after the win. "God knows we're going to be kicking a lot of field goals."
- - -
Penn State 29, Navy 16

• After completing upwards of 80 percent of his passes with multiple touchdowns and no turnovers in the first half, Alabama quarterback A.J. McCarron will not attempt a pass in the second half as the Crimson Tide institute their own form of a "running clock" in a blowout win at Arkansas. Following the loss, Razorback coach John L. Smith will surprise his counterpart by dumping a full bucket of Gatorade on Nick Saban at midfield, then laughing maniacally as he jogs backwards into the locker room.
- - -
Alabama 34, Arkansas 10

• Having dispensed with the ritual "trash talk," Boston College fans and Northwestern fans will let their guard down, bond over their mutual love of Modernist architecture and leave Ryan Field en masse in the third quarter to discuss declining linguistic standards as cultural diversity turns illiteracy into a perverse form of literacy over seasonal fruit compote.
- - -
Northwestern 22, Boston College 17 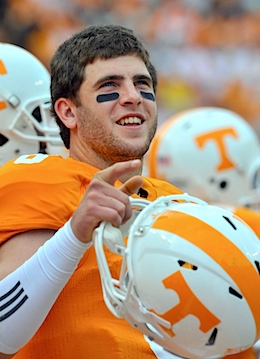 • Tennessee will outgun Florida by more than 100 yards of total offense but ultimately lose after quarterback Tyler Bray commits three turnovers, two of them killing scoring opportunities inside the Gator red zone. Meanwhile, Bray's counterpart, Florida QB Jeff Driskel, will complete fewer than half of his passes but finish with a higher pass efficiency rating on the strength of two touchdown passes and no giveaways.
- - -
Florida 23, Tennessee 21

• Unexpectedly missing quarterback James Franklin due to a sore shoulder, Missouri will fall behind early and eventually lose when a fourth quarter rally falls short against visiting Arizona State. The Tigers' final drive will end when wide receiver Marcus Lucas drops a potential first-down reception on fourth down, later explaining that he was spooked by what he swears was a ghostly vision of former ASU safety Mitchell "Fright Night" Freedman attempting to literally take off Lucas' head.
- - -
Arizona State 31, Missouri 26

• Stunning USC and most of the country by controlling the line of scrimmage through the first two quarters, Stanford will take a narrow lead over the Trojans into halftime in Palo Alto, only to be burned by three Matt Barkley touchdown passes in the second half of a comfortable USC win. The knockout blow will come midway through the fourth quarter, when the Trojan defense returns a pick off Stanford quarterback Josh Nunes inside the Cardinal 10-yard line, setting up Barkley's first and only touchdown run of the season via QB sneak.
- - -
USC 40, Stanford 24

• Down three points with less than two minutes to play in East Lansing, Notre Dame coach Brian Kelly will seek revenge for Michigan State's infamous "Little Giants" call in 2010 by attempting a fake field goal from the same spot on the field, only to watch his holder flub the throw, allowing Michigan State to take the subsequent turnover back for an icing touchdown. "Not a smart call," Kelly will concede after the game. "I should have just let Tommy Rees throw a regular pass."
- - -
Michigan State 27, Notre Dame 17

• Texas tailbacks Malcolm Brown, Joe Bergeron and Jonathan Gray will combine for well over 300 yards rushing and four touchdowns in a punishing Longhorn win at Ole Miss, in which UT will double up the Rebels' number in time of possession. After reviewing film of the loss, Ole Miss coach Hugh Freeze will then denounce the game at his regular Monday press conference as "an abomination" and demand references to it be stricken from all university publications and broadcasts on moral, religious and cultural grounds.
- - -
Texas 36, Ole Miss 16

• Utah quarterback John Hays, filling in for newly retired starter Jordan Wynn, will be benched after his second interception of the game gives rival BYU a three-score lead midway through the third quarter. Hays replacement, towering true freshman Travis Wilson, will lead the Utes on a pair of late but ultimately meaningless scoring drives and subsequently be rewarded with the starting job for the rest of the season.
- - -
BYU 28, Utah 20