Next on USC's 2012 Redemption Tour: Erasing the Cardinal 'L'

Share All sharing options for: Next on USC's 2012 Redemption Tour: Erasing the Cardinal 'L' 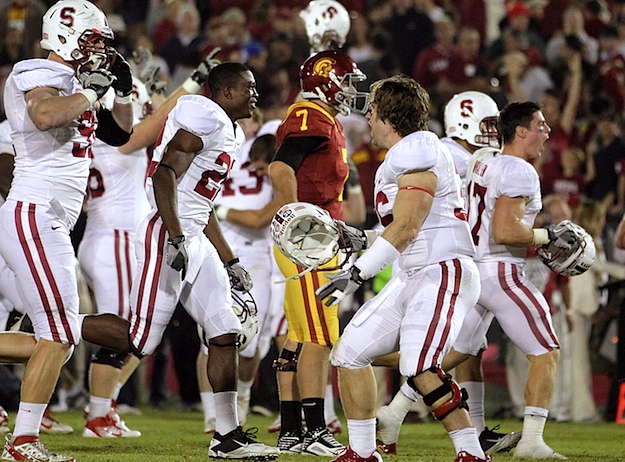 Hey, kids, it's your legacy-defining stat of the week: Matt Barkley, the most celebrated passer in college football, is 0-3 against Stanford as USC's starting quarterback, making the Cardinal the only Pac-12 opponent he's yet to defeat heading into his last chance Saturday night in Palo Alto. For a team and player whose seasons hinge entirely on finally putting their names on trophies they've yet to win, the first big test of the season could not be ore appropriate.

In large part, that's because Stanford, more than any other rival, has defined USC's decline as both a national and a West Coast power, beginning with the Cardinal's impossible upset over the top-ranked Trojans in October 2007. Over the last three years, Stanford has also been a handy measuring stick both for Barkley's growth as a quarterbacks and its limits.

As a true freshman in 2009, Barkley was picked off three times, including a clinching pick-six in the fourth quarter that opened the floodgates in a 55-21 rout. In 2010, he matched Andrew Luck touchdown for touchdown in a back-and-forth shootout in Palo Alto, and drove USC for the go-ahead touchdown with barely a minute to pay in the fourth quarter, only to watch as Luck moved the Cardinal into position for the winning field goal on the final snap. Last year, he dueled Luck to a draw in regulation, then another, then another, until tailback Curtis McNeal fumbled away the Trojans' only chance to answer a Stanford touchdown in the third overtime. Every year, another step closer. 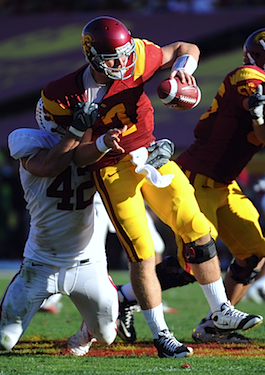 It was only three weeks after that disappointment that USC finally broke through at Oregon, on the strength of a 323-yard, 4-touchdown effort from Barkley on the same field where the Ducks had originally overthrown the Trojans' West Coast dynasty in a violent coup in 2009; one week after that, they hit the offseason at full speed with a 50-0 dusting of UCLA. At that point, USC slipped so easily back into the role of high-scoring national juggernaut, and Barkley so easily into the role of square-jawed, golden-armed Heisman frontrunner, that it was difficult not to forget over the subsequent nine months that anyone had ever though of them as anything else.

But it won't be difficult at all if they come up short on Saturday night, because that record will be there as a permanent reminder, emblazoned on the rest of the season – and on Barkley's permanent record as steward of the blue-chip, championship lineage he inherited as USC's starting quarterback – like a scarlet letter, mocking the Trojans' ostensible progress: Oh-and-four. Maybe it should be the Cardinal 'L.'

Aside from the record itself, that particular blemish could put every other overarching goal, team and individual, out of reach, simply by thwarting the consensus that USC has actually emerged from the wilderness. Not since Peyton Manning, whose tenure at Tennessee wound up being defined mainly by his repeated failures to pass the Vols past Florida in the mid-nineties, has a player of Barkley's caliber come up so consistently empty against a single opponent. (Especially when they've played as well as Barkley has against Stanford the last two years.) Not that he minds comparisons to Manning, in general, but it goes without saying that that isn't the circle Barkley came back to complete.

In this particular case, there is almost no realistic scenario in which Stanford wins unless Barkley either a) Is injured, or b) Commits the sort of egregious, game-changing error we haven't seen from him since he was a freshman. Obviously, both are extremely unlikely, as are the Cardinal's chances of pulling the upset otherwise. Stanford has some talent on defense, most notably first-rate, veteran linebackers Shayne Skov and Chase Thomas, but that hasn't stopped USC from moving the ball or scoring points the last two years. And unlike, say, Oregon, which never has any shortage of home-run hitters on offense, Luck's departure – along with his top three receivers and two All-Americans on the offensive line – leaves the Cardinal without a reliable big-play threat if the game turns into another shootout. There is no evidence that Luck's successor, Josh Nunes, or his unproven receivers can make USC pay for stacking the line against the run.

Which is only to say, USC looks like the more talented, more proven team, and even on the road it probably does not have to be perfect to pass this test with flying colors. But if 2012 has any chance to be the season it can be, and that the Trojans clearly expect it to be, there is no more critical litmus on any other schedule anywhere else this season.