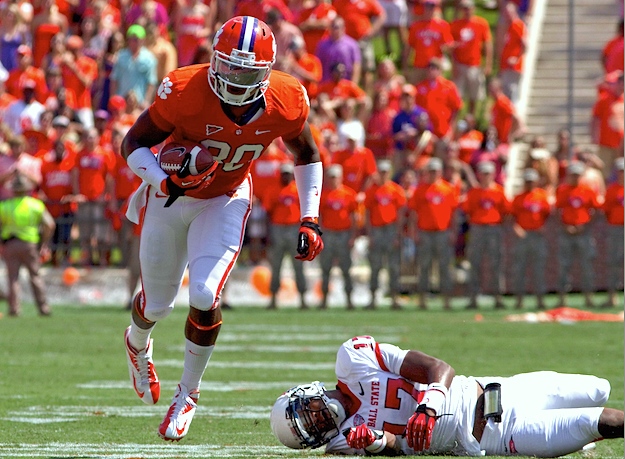 Inevitably, college football headlines were dominated Wednesday on every front by the latest reason to pay attention to Notre Dame for something other than its ongoing mediocrity on the field: Finally, after all these years, Notre Dame Football is not joining the ACC. All of the angles and implications of the ongoing independence of the sport's most storied program were explored, dissected and discussed in excruciating detail, from revenue sharing (there will be virtually none) to concurrent television rights (again, virtually none). Most notably, there was the scheduling agreement whereby the Fighting Irish will play five games per year against ACC opponents, hardly a groundbreaking shift for a program that is already facing four games against ACC teams in 2012 (including future member Pittsburgh) for the second year in a row.

By the end of this season, Notre Dame will have played 21 regular season games against current and future ACC "rivals" since schedules expanded to twelve games in 2006 – an average of three per season – against nine of the league's 14 members as of next year. They were practically living together, anyway.

The subsequent scheduling crunch is not really an issue for Notre Dame, which still has room for its annual series with Michigan State, Navy, Purdue, Stanford and USC, and is really more interested in the ACC's postseason setup than anything else. It is an issue for the ACC schools (Clemson, Florida State, Georgia Tech) that already close their schedules against eternally despised non-conference rivals from the SEC. As it stands, the ACC plans to add a ninth conference game to the schedule when Pitt and Syracuse come aboard next year, leaving only three non-conference dates instead of the current four. Does the league really expect some of its members in certain years to use two of those dates on the traditional in-state rival and Notre Dame?

God, I hope so. For fans, the ninth conference game is an unambiguous boon for precisely this reason: One more legitimate, competitive, actually interesting matchup where otherwise there would be a pointless, lopsided body-bag game that exists exclusively for the ceremonial transfer of funds. The Pac-12 has never gotten enough credit for being the first conference to use the twelfth regular season game make the leap from eight conference dates to nine, and especially not for retaining most of its high-profile, competitive non-conference games in the process. These dozen games make up a full third of the Pac-12's non-conference schedule this year: 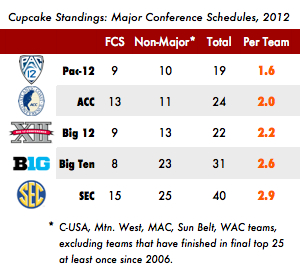 The only two teams that won't see a serious, above-the-fold non-conference opponent this year, Colorado and Oregon, have played regular season games against LSU, Ohio State, Georgia, Tennessee, Boise State and West Virginia within the last three years. Only two of the games above, USC/Notre Dame and BYU/Utah are traditional, more or less permanent rivalries that must go on no matter what. The rest are a combination of aggressive scheduling and giving the ticket-buying customer a worthwhile product for his money.

A nine-game ACC slate that also includes eight automatic non-con games against Florida, Georgia, South Carolina and Notre Dame would look much the same in terms of degree of difficulty and cutting the fat. The adoption of a nine-game slate in the Big 12 hasn't instilled its members with quite the same sense of gusto, yet, but at least it has cut back on the number of potential cupcakes; the same will almost certainly be true at some point of the Big Ten, which is likely to revisit the idea of a nine-game conference schedule now that the Pac-12 has backed out of the scheduling agreement that shelved said idea last winter. Once the other power conferences are on board, even the cupcake-loving SEC will have to come around, or eventually face the consequences when the future playoff committee gets around to discussing strength of schedule.

Of course, the most important customer in the current landscape isn't buying tickets: He's buying inventory to stock his television/digital networks, and presumably is not shelling out billions with an eye toward airing more of Alabama grinding Western Kentucky into a fine paste. The rapidly expanding conference and team-specific platforms aren't going to fare much better with those games, either. That single trend – colossal, unprecedented dollars from television contracts – is driving all of the others: Conference expansion and realignment, playoffs, inflated coaches' salaries. With any luck, it's also leading us into an era in which ritual sacrifices begin to cost more than they're worth.