Premature Panic Week: Auburn, way down in the hole

Share All sharing options for: Premature Panic Week: Auburn, way down in the hole 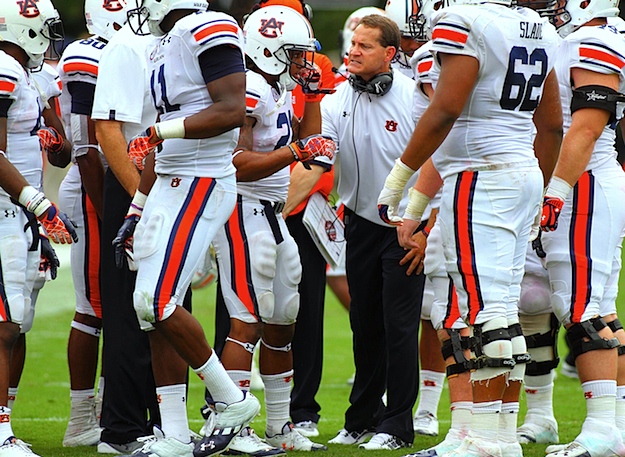 Earlier this week, a couple of CBS bros and I were discussing the obscure but rapidly growing fraternity of head coaches who were fired after winning a national championship at their respective schools. Prior to 2006, it had exactly one living member: Barry Switzer, who was less than four years removed from his last title at Oklahoma when he was forced out in 1989 in the wake of NCAA sanctions and a high profile crime wave by Sooner players. In the last five years, he's been joined by Larry Coker, Phil Fulmer, Bobby Bowden, Jim Tressel and Joe Paterno, all of whom (except Coker) were either a) At least a decade removed from their last championship, or b) Deposed for scandals that had nothing to do with win-loss records or the product on the field. In Coker's case, he was never given much credit for assembling the fearsome Miami juggernaut he led to the 2001 title in his first year as head coach, anyway, considering it would have taken a staggering display of incompetence to somehow not win a championship with a team featuring 13 future first-round draft picks who had originally signed on to play for Coker's predecessor, Butch Davis.

Which brings us to Gene Chizik, still less than two years removed from Auburn's improbable BCS triumph in Glendale, Ariz., but only about 96 hours from his "signature defeat" Saturday at Mississippi State, a 28-10 flop that confirmed all of the Tigers' worst fears. It was a thorough, start-to-finish debacle. Quarterback Kiehl Frazier, winner of a preseason competition for the job, looked overwhelmed in his first road start, ultimately serving up five turnovers – three interceptions, two fumbles – after finishing the first half with that rare gem of ineptitude, a negative pass efficiency rating. The offense as a whole barely cracked 200 total yards and failed to find the end zone. (Auburn's only touchdown came on a third quarter kickoff return.) The same defense that was gashed for 528 yards against Clemson in the opener, sans Sammy Watkins, was carved up for 388 by a much less explosive outfit from MSU, and yielded three touchdowns in the second half alone.

Not to Alabama or LSU. To an ostensible equal, Mississippi State, that Auburn fans would probably prefer not to acknowledge even as an equal. And the 18-point margin could have been much worse.

It is the margin, far more than the 0-2 record itself, currently fueling scrutiny over the buyout numbers in Chizik's contract. The record is not really a crushing disappointment: For a team returning 18 starters, the season arrived with a palpable sense of reinvention, from the quarterback to new coordinators and schemes on both sides of the ball. It had to, considering the previous season ended with lopsided beatdowns at the hands of Arkansas (38-14), LSU (45-10), Georgia (45-7) and Alabama (42-14) that spent all of the goodwill earned during the 2010 title run, and then some. Auburn came in 100th nationally in total offense and next-to-last in the SEC in total defense, necessitating a purge; by the start of winter conditioning for 2012, not only were both coordinators making tracks for greener pastures, but so was the best player on the team. 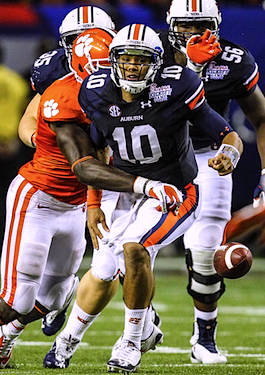 Which leaves Chizik, in year four, presiding over a team that is both wholly his own and appears to be much further behind the pack in the SEC than the program he inherited in December 2008, when his arrival from Iowa State was greeted with equal parts confusion and anger. That reaction may look mild Saturday compared to what will follow if the Tigers fall to 0-3 as 16-point favorites against Louisiana-Monroe, the same ULM that ambushed Arkansas Saturday as a 30-point underdog. Even if it doesn't, though, Auburn is still facing a gauntlet that includes the same battery of rivals – LSU, Arkansas, Georgia and Alabama – that destroyed Auburn last year by an average margin of 31 points per game. There's also a three-game stretch in October against Ole Miss, Vanderbilt and Texas A&M (the first two on the road), a loss in any one of which would all but guarantee a losing record.

Facing the very real prospect of a 5-7 finish, or worse, Chizik has doubled down on Kiehl Frazier as his starting quarterback, assuring reporters after Saturday's horror show in Starkville that "we're not pinning that on one guy." But to most of the outside world, Auburn's BCS triumph in 2010 (and the fat raise for Chizik the following summer) can be largely pinned on one guy, Cam Newton, who is not about to walk through that door. Without an unstoppable, 6'6", 250-pound übermensch in the shotgun, the 2009 and 2011 teams were mediocre at best; without Dyer or offensive coordinator Gus Malzahn, the 2012 outfit is grasping for any shred of hope to prevent free fall, if it's not already there.

If so, another loss Saturday against Monroe would be rock bottom, no bounce. Continuing the analogy, a win would be like grasping onto a shrub at the edge of a cliff, at least until LSU and Arkansas come along in subsequent weeks with their chainsaws. Until they develop some new weapons of their own, the Tigers and their coach are only hanging on for dear life.